The Eyes of the City 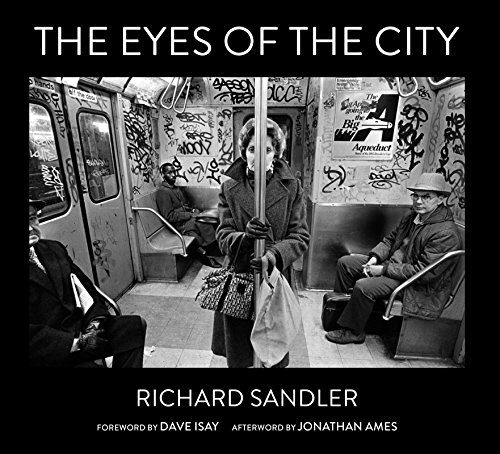 “The Eyes of the City invites an unhurried view, seducing the eye to linger over the images, letting stories come to life in the mind.”

Like a war correspondent, the street photographer Richard Sandler explored New York City and Boston “[f]rom 1977 to just weeks before September 11, 2001.” The Eyes of the City collects Sandler’s photographs, creating a rich historical document of a time long since faded into memory.

He began his street photography career after Mary McClelland gave him a Leica camera. The photographs capture random moments on the mean streets of Boston and New York City. He chronicles these cities and the people with a sharp eye and a quick finger. These moments come to life in rich black and white prints.

The second photograph, “World Trade Center, NYC, 2000,” shows the Twin Towers in the far distance, jutting above the horizon. The photograph is ambiguous. When was this taken? Where was this taken? Sandler may have taken it from a bridge or on a road opposite Manhattan. A grainy haze envelops the scene, turning the landscape into a dreamy scene reminiscent of Caspar David Friedrich’s more elusive works. And so on, photograph after photograph, each preserving a moment in time.

Sander’s work swings wildly from abstract and artful to the raw and gritty. The photographs preserve a frozen narrative, a story begging to be told. With no descriptors, save Sandler’s own in the back of the book, these are photographs stripped of any interpretive framework.

“Three Furs, Three Do’s, NYC, c. 1981” pictures three ladies of indeterminate age (Sandler captures the backs of their heads) staring at a store window. Each wears a full-length fur coat and each sport a Nancy Reagan-esque hairstyle. The mannequins they stare at sport frills and shoulder pads. What’s their story? And to paraphrase Jerry Seinfeld, “Who are these people?”

The photographs follow a thematic sequence, the chronological sequence veering back and forth between past and present. Since the photographs are black and white, this complicates interpretation, since black and white photography implies it was taken in the past. People stare back at Sandler in the subway, their figures framed by omnipresent tagging. These turn the subway into a Jackson Pollock artwork.

Sandler joins a pantheon of other street photographers, including Elliot Erwitt, Henri Cartier-Bresson, and Walker Evans. In his foreword Dave Isay likens The Eyes of the City to a religious text, while Jonathan Ames, in his afterword, likens Sander’s photographs to a horror movie. These disparate interpretations bespeak the aesthetic power of Sandler’s photographs.

These are images with no singular interpretation, stories frozen in time by the photographer’s lens. The Eyes of the City invites an unhurried view, seducing the eye to linger over the images, letting stories come to life in the mind. It is a celebration of the urban and cosmopolitan, filled with people rich and poor, black and white, gay and straight.