Eye of the Sixties: Richard Bellamy and the Transformation of Modern Art 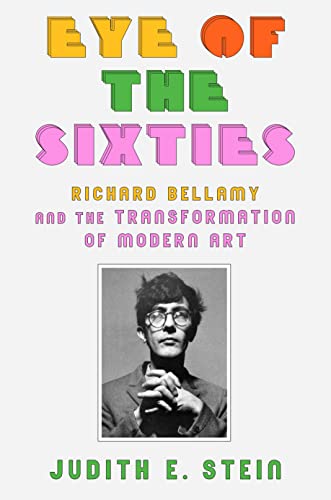 Richard Bellamy was the 60s visionary who championed the new wave of American abstract expressionists and who had the first eye for pop-art, minimalism, and performance happenings in the fabled Green Gallery of West 57th Street, where he was a galleryist of infamous repute from 1960–1965.

Writer and art historian Judith Stein first heard about Bellamy from colleagues when she was curator at the Pennsylvania Academy of the Fine Arts in the 80s, and she was immediately intrigued, which was not surprising because Bellamy was not interested in fame or fortune.

Bellamy was born in Wyoming, Ohio, the son of Chinese physician Lydia Hu and her American husband Richard Bellamy, who met at med school. They initially faced blatant prejudice when Richard began his practice. The locals changed their tune when they relied on them for medical treatment. They also ran a clinic during WWII.

Meanwhile, as the only Chinese American in the local schools, Dick Jr. was ostracized in school. He was a loner, but with a growing interest and success in art and literature; he ignored high-school indignities. At the beginning his college career, his mother died of a congenital heart condition, and Dick was devastated.

He was on his way to join the merchant marines instead of academics, but fortuitously took a side trip to Provincetown, which became the new bohemia for painters, poets, actors, musicians, and vacationing socialites. Bellamy was involved with the seminal “49” group show of underground American artists, performers, poets, and musicians fleeing the rigid New York arts scene to explore rebel territory.

Bellamy also met and fell in love with Nancy Christopherson, a photographer and filmmaker, who had just divorced and was raising her biracial daughter Poni. Back in New York they were part of the in crowd at Norman Mailer’s loft, hanging out with NY glitterati from the art, theater, and literary worlds. Despite sincere effort, Dick and Nancy’s marriage fell apart, though they never got legally divorced. It was the first in a series of troubled relationships for Bellamy.

Bellamy had a brief career in broadcasting. His radio voice was so good that he soon was a popular deejay at WNCX in Connecticut, a gig cut short by his drinking and on-air antics.

Back in New York, Bellamy’s curatorial eye had him arranging exhibitions and representing a contemporary art collective called the Hansa. His anarchistic approach, wild behavior, and elusive persona on the job, as well as his passion for emerging artists, compried his primary skillset. He even had a short stint at the top tier Leo Castelli’s gallery, but was glaringly unsuited for that exclusive, moneyed art world. Yet his reputation as a prescient galleryist grew, and he was backed by a wealthy couple, Robert and Evelyn Scull, to run the Green Gallery.

They opened it boldly in the center of the most commercially exclusive art district in Manhattan. Bellamy created a stylish environ that was “Part theater, part sculpture and . . . radical,” but emerged as the new gallery, attracting everybody.

The sculptor Walter De Maria commented, “Dick gave artists a showcase that nobody else would have at that time.” Pace Gallery dealer Arne Glimcher dubbed the Green “the great proving ground of the sixties.”

Bellamy first big success was an exhibition of Marco di Suvero sculpture. Bellamy went to great lengths to produce the show after di Suvero had almost been killed in an elevator accident and was unable to work for a year. Bellamy helped him recover so the artist would be shown first at the Green. He pushed other artists to virtually launch successful careers. Male artists dominated the art scene in New York, and Stein gives Bellamy credit for presenting women artists when most other galleries ignored their work.

Whatever his instinct to pick artists of the moment who went on to have major careers, Bellamy’s vision and risks paid off and put him on equal footing with dealer Leo Castelli, who acknowledged him as a brilliant colleague.

Bellamy’s personal life continued to be turbulent. In its final year, The Green was still going strong, but Bellamy would often disappear, leaving it in the hands of his assistant. By then he was in a relationship with a dancer Sheindi Tokayer, with whom he had a son Miles. Bellamy was drinking heavily, ignoring his personal commitments, fighting with loved ones, and ignoring his son. He rehabilitated himself in his later years as a semi-retired private art dealer, and he cleaned up his personal life, including reuniting with his son.

Stein’s authoritative research can get dense with many names and events overlapping, but if you can keep track of everybody, there is a lot of rescued art history here. If there is one deficiency in the book, it is that Bellamy’s private life isn’t more fleshed out by Stein, but you can only assume she got as much verifiable information as she could from the reclusive Bellamy before he died in the mid-90s. For all intents, Stein brings vividly to life both the man and his wild artistic times.