The Eye of God: A Sigma Force Novel 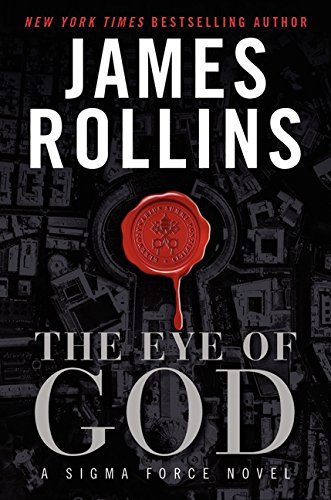 In James Rollins’ new novel The Eye of God, a comet threatens Earth, and the only way it can be stopped is if a group of ex-Special Forces operators with advance science degrees can find the burial place of Genghis Khan.
At first glance the premise sounds over the top, but in Mr. Rollins’ skilled hands it works ingeniously.

In the interest of full disclosure, Mr. Rollins gave me a blurb on my last novel, and we share an interest in caving, but I would have raved about this book if I didn’t know him from Adam and I’d never set foot underground.

All the science, all the history, and all the locations are masterfully intertwined. The characters are multi- dimensional. And the story is, well, a corker.

The novel opens in Central Hungary in the year 453. The seventh bride of Attila the Hun is poisoning him on his wedding night so she can steal relics inadvertently given to him by Pope Leo.

Then the book jumps forward to present day. A comet like one set to light up the night sky this coming November is being intensely studied by scientists who suspect it is giving off “dark energy,” the mysterious stuff of black holes.

In this one scene, Mr. Rollins manages to deliver an understandable primer on quantum physics while vaulting the story into high drama and breakneck speed, no mean feat. The scientists have sent out two satellites to study the comet.

One probes the comet’s tail and promptly disintegrates. The other reels out of orbit and crashes in Asia, but not before broadcasting frightening images of Boston, New York, and Washington, D.C. The three cities lie in burnt ruins.

The scientists come to believe that the satellite became briefly “entangled” in the comet’s dark energy thereby “wrinkling time”, a phenomenon first predicted by Albert Einstein. What they saw in those images was devastation the comet would cause in four days time.

At the same time in Rome, a researcher at the Vatican receives a package from an old friend who’s been missing for ten years. It’s an old metal box that contains third century Aramaic writing on a human skull from the thirteenth century. I won’t give away whose skull it is, but in translation the ancient writings predict that the end of the world will come four days hence.

At this point Mr. Rollins’ narrative takes on the pace of a galloping horde, with “Sigma Force” teams dispatched to Asia, one trying to find the crashed satellite, and the other the missing researcher who sent the box and the skull.

Along the way we travel deep into North Korea, and visit Kazakhstan’s Aral Sea, one of the most toxic sites in the world. We also witness expert falconry, badass warriors at the peak of their game, and a dangerous expedition into the steppes, mountains, and lakes of Outer Mongolia. Did I mention the triad war in Hong Kong and Macau?

It’s obvious that Rollins has been to all these places, and he makes them palpable in the story without making it a travelogue. It is also obvious that he knows his history, both the truth and the rumor. The lives and legends of Genghis Kahn, Attila the Hun, and St. Thomas the doubter are all fodder for his remarkable imagination.

The science and the engineering are thrown into the mix in a way that’s not only understandable and plausible but also accurate. Mr. Rollins spent time with quantum physicists at the Fermi Lab to get it all right.

The people who live in the book are rendered with equal care. Mr. Rollins gives nuance and story lines to every one of his characters, bad guy, good gal, and everyone in between.

Despite their fantastical jobs, he manages to make them seem like real people, even the guy who deliberately has sliver-sized “rare earth” magnets surgically implanted into the tips of his fingers so he can literally “feel the energy.” The fact that these magnets exist and that there are people who’ve had the implants thereby achieving a true “sixth sense” only makes the story that much more fun.

Okay, so there was one incident late in the story involving a seal that I didn’t quite buy, but that’s just quibbling. If you’re a fan of smart, entertaining adventure fiction, this is your summer beach read writ large.

Mark Sullivan is the author of twelve thrillers including the #1 bestsellers Private Berlin and Private Games, which he cowrote with James Patterson. He was an Edgar Award finalist, winner of the W. H. Smith award for “Best New Talent,” and his debut novel The Fall Line was named a New York Times Notable Book of the year, a rare honor. His next novel with Mr. Patterson, Private: No Prisoners, and his forthcoming standalone novel, Outlaw, both launch in Fall 2013.