Extra Virginity: The Sublime and Scandalous World of Olive Oil 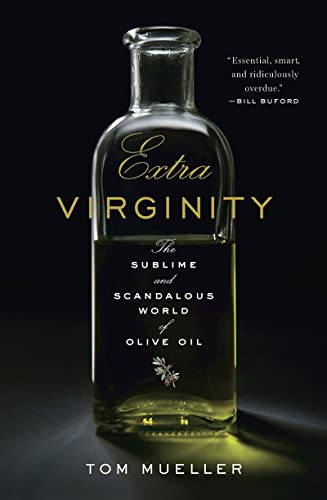 “In addition to interviewing olive growers, harvesters, and processors, Mr. Mueller talks with chemists, academicians, and government officials, lending credence to the book and presenting the reader with a truly comprehensive picture of the olive oil industry. . . . Extra Virginity promises a journey into the ‘sublime and scandalous world of olive oil’ and delivers on that promise. Readers of this book will never again look at olive oil in the same way.”

The waiter deftly pours the oil into a glass bowl after setting the basket of fresh ciabatta on the table. As you dip that first slice into the oil, your taste buds anticipate a delightful tactile experience. But how many times does any diner stop to think about how this oil came to hold such a highly regarded position in the kitchen and on the table? Extra Virginity provides all the historical information, as well as the drama and intrigue, surrounding this small, but coveted fruit.

Author Tom Mueller leads the reader through a geographic tour of olive groves around the world from Italy, Greece, and Israel, to Australia, South Africa, and the United States. As expected, much of the action takes place in several parts of Italy, but attention is also given to other locales where olive oil has played a vital role in the country’s economy.

The cast of characters in Extra Virginity ranges from Grazia and Saverio De Carlo, who struggle to continue the four-centuries-old family business of making extra virgin oil to Domenico Ribatti—who is said to have doctored olive oil and was charged with contraband, fraud, and operating a criminal network—plus a host of other colorful characters.

In addition to interviewing olive growers, harvesters, and processors, Mr. Mueller talks with chemists, academicians, and government officials, lending credence to the book and presenting the reader with a truly comprehensive picture of the olive oil industry.

For instance, Mr. Mueller introduces an interesting figure: the Minnesota epidemiologist Ancel Keys, who developed the K ration for the United States Army. After conducting the Seven Countries Study (Greece, Italy, Yugoslavia, the Netherlands, Finland, Japan, and the United States), Dr. Keys determined that a diet rich in vegetables, fruits, fish, bread, and pasta was most beneficial, thus coining the term “Mediterranean diet.”

The author also interviews Gary Beauchamp, Ph.D., Director of the nonprofit Monell Chemical Senses Center in Philadelphia, which studies the chemical foundations of the senses. Dr. Beauchamp participated in a “molecular gastronomy” event where he discovered a link between olive oil and the nonsteroidal anti-inflammatory effect of ibuprofen. His epiphany led to further exploration and the eventual link between olive oil and the Mediterranean diet.

But as the author further explains, Dr. Keys’ findings led to some unexpected and unwanted consequences.

From the earliest times in history, olive oil has been considered a “sacred substance,” used in religious ceremonies for both the living and the dead. Mr. Mueller offers lessons in how the oil was used—initially as “food, fuel, skin lotion, contraceptive, detergent, preservative, pesticide, perfume, and adornment, as well as a cure for heart ailments, stomach aches, hair loss, flatulence and excessive perspiration”—its economic importance, and its role in many criminal offenses. In fact, he traces the Israeli-Palestinian conflict back to the days when the geographic location of olive trees spurred controversy.

The author also paints vivid pictures of the ways in which the Christians utilized olive oil, “a vital ingredient in the worship, economy, health, and daily diet of the Christian clergy, and through them, in the lives of the faithful.” Mr. Mueller relates a number of mythical stories and legends, including one about St. Nicholas whose relics are said to emit a sweet-smelling oil at the anniversary of the saint’s death.

Mr. Mueller devotes significant ink to relating the numerous scams and fraudulent situations revolving around olive oil. Although several regulatory agencies have been created, particularly in Europe, to oversee the production, processing, packaging and marketing of olive oil, unscrupulous individuals still manage to elude detection as they mix low-grade vegetable oils and other, sometimes harmful ingredients, with the real thing and pass the final product off as pure olive oil. As Mr. Mueller notes, “Olive oil is one of the most frequently adulterated food products in the E.U. (European Union) . . .”

Although Extra Virginity: The Sublime and Scandalous World of Olive Oil’s main focus is olive oil, the author lends some insight into other food products, particularly margarine and wine. He presents a partial history of margarine and expounds on the way in which dietary guidelines have mistakenly driven consumers away from all fats, even beneficial ones, such as that in olive oil. He also compares the testing and tasting process for to that used to identify fine wines.

Several pages of colored illustrations and photographs enhance the book, presenting clear visuals of olives in their natural state and in production, both in ancient times and today, as well as an assortment of carrier vessels and individuals as they demonstrate the various uses of oil.

The uninitiated will find the glossary invaluable. Definitions with detailed explanations help readers understand various methods of preparation, taste nuances, and the difference between the many types of oils and fats. For instance, strippaggio, a word seldom used in general conversation, relates to the slurp an oil-taster makes after taking an oil sample into his mouth to obtain a complete sensory impression, and drupe constitutes the botanical term for olives and other fruits that contain a single hard stone.

And one of the most useful sections of Extra Virginity can be found at the end, where Mr. Mueller offers a tutorial on choosing a good oil, in some respects a summary of the advice imparted earlier in the narrative. Yet these valuable tips help a consumer navigate the highly complicated world of olive oil. From the color and the scent to labeling and bottle color, the author indicates the best options for obtaining a high quality product. If the recommendations in the book do not provide enough information, the Extra Virginity website is sure to answer any remaining questions.

Extra Virginity promises a journey into the “sublime and scandalous world of olive oil” and delivers on that promise. Readers of this book will never again look at olive oil in the same way.