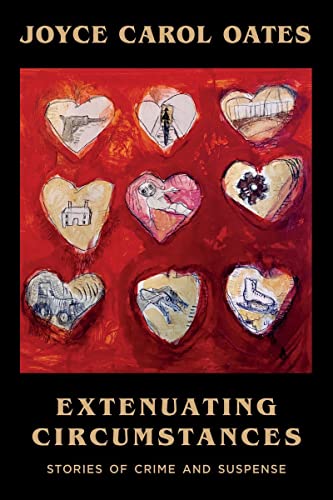 “Joyce Carol Oates’ tales are unsettling, disquieting, some endings left hanging, leaving readers with questions that implicate more horror yet to come to the normal-seeming characters who inhabit them.”

This collection of 34 stories spans the first 30 years of Joyce Carol Oates’s prolific career. She is the author of more than 70 novels, plays, and collected essays, short stories, poetry, and criticism.

Long out of print, these tales have not until now appeared in any form this past century. They are an excellent introduction for the uninitiated and a welcome refresher for long-time fans. Both will enjoy watching the way Oates has developed her craft, and her distinctive style, over the years.

Sometimes experimental, even metafictional, the stories bend the expectations of traditional prose forms. Oates explores disturbing truths and terrifying possibilities of what people are capable of. The creepy stories take unexpected turns into the heart of human darkness, such as what cruelty an innocent-looking little girl and her sock puppet are capable of.

She explores the forbidden corners of human experience. Joyce Carol Oates’ tales are unsettling, disquieting, some endings left hanging, leaving readers not answers but questions that implicate more horror yet to come to the normal-seeming characters who inhabit them:

An early story uses anachronistic dialect to indicate someone stupid and uneducated. Also early on early readers encounter what appear to be ungrammatical sentences (“Nancy is 18 and works uptown in the store, she thinks she’s too good for everyone”). But fans will recognize Oates’ nascent style. She paints telling portraits in a stroke: “In this next house is a man who does nasty things with the dog.”

Memories weave in and out to create an ominous foreboding. The early Oates excels at vivid description and shows how much can be in a fragment. “You give everyone too much, that was the trouble.” Or “Looking at the coffee left in his cup as if it were a forlorn reminder of him—the man she was even then beginning to forget.” Or “She blundered into overhearing a conversation.”

Her use of indirect dialogue is fascinating, as in the story about a haunted house and no trespassing signs. It is so full of digressions that the reader wonders what they have to do with the haunted house. And then the story breaks into two mental atmospheres, simultaneously revealing time then and time now. Just as the reader has adjusted, comes a surprise: “For no reason anybody ever discovered Mr. Minton had beaten his wife to death and afterward killed himself with a .12-gauge shotgun.”

On a cruise ship bound for an exotic South Pacific island, the genial captain announces that this will be the passengers’ final disembarkation. Their children, whose “teeth were perfect, were made to be; yes, and they had cosmetic surgery if necessary, or nearly necessary,” and who had arranged for the parents’ cruise, simply can’t wait for their inheritance any longer. The island lies in shark infested waters and no other dénouement is possible.

In “Death Valley,” a young girl accepts a ride from a much older man she meets in Las Vegas. He queries her about the sensuous details of her orgasms, and she slashes his throat with a hidden razor. Or does she? We are left in the desert, sand soaked with blood, car engine idling, wondering if any of it happened.

Regular patrons of Le Coq d’Or are seated at “an undesirable table” on a holiday Saturday night. But seated at the undesirable table “in the front bay window at the dining room of Le Coq d’Or with an unwanted view of the street outside,” they determine themselves to have a good time, spending hours enjoying wine, good conversation, and delectable food. Yet they are disturbed by events outside that press on their party. At the end they accept their fate “that they would be back. They have no choice.”