Experience Is the Angled Road: Memoir of an Academic 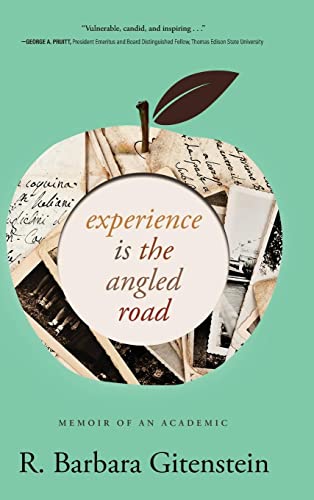 Like many memoirists, R. Barbara Gitenstein’s insightful and deeply personal story germinated as she looked through her life’s rear-view mirror and at the lessons she learned along the way.

Gitenstein was going through a closet full of her parents’ memorabilia in the months following her own retirement after nearly 19 years as a pioneering university president. In this trove of letters and memos she found numerous triggers that sent her back in time.

The narrative that unfolds is largely structured around these letters, along with her own correspondence, all framed with retrospective analysis and context.

What she found was a story of resilience and determination.

For a Jewish girl from a flyspeck Alabama town, she had clearly come a long way.

From 1999 to 2018 she served as president of The College of New Jersey, a public university, capping a distinguished career as an English scholar, professor, and educational administrator.

Gitenstein’s journey began in Florala, a town near the border of Alabama and the Florida Panhandle. Her family, from New York, moved south to operate a shirt factory, the town’s largest employer. Not surprisingly, they were considered outsiders.

“It was a challenging and strange childhood,” she writes in the Introduction to Experience Is the Angled Road: Memoir of an Academic.

“I did not fit in anywhere, not in a town of eighteen hundred Baptists and Methodists, two hundred Presbyterians, and ten Jews,” five of whom were her own family.

Gitenstein recalls that she was lonely and insecure as a child, but that her outsider status gave her an outsider’s second sight, one that would serve her well.

“For me to survive and thrive I had to become able to see with others’ eyes,” she recalls.

And so she did.

“I found that embracing the privilege of being an outsider results in great vision and ultimately can be a great foundation for strength.”

A conciliating middle child, Gitenstein was precociously intuitive. Even as an eighth grader she was able to analyze the social dynamics of her first prep school, in Jacksonville, Fl., and a then at a much more tony one in Washington, D.C.

“Most significantly, I learned that brains and leadership skills can overcome social class.”

One of the trickiest things about a memoir is how writers manage to weave the strands of their lives—the personal and professional. Gitenstein does this by writing separate sections about different family members and time periods. Inevitably, this choice leads to some overlap and back tracking, covering the same events from different perspectives.

Few lives, and few families, benefit from a microscope’s scrutiny, which can be pitiless. Notwithstanding, the author treats the Family Gitenstein fairly and sympathetically.

Beginning with herself. The author is frank about the serious health challenges she has faced, including ulcerative colitis and infertility, and how they affected her life.

There are chapters on each of her parents, as well as one on her husband of more than 50 years, each of which recalls another old saw.

As Leo Tolstoy once observed in Anna Karenina, “All happy families are alike; each unhappy family is unhappy in its own way.”

The Family Gitenstein, as Barbara describes it, had elements of both happiness and unhappiness.

One of the chief causes of the ongoing tension in her parents’ marriage was that her father was gay, but deeply closeted. Her mother bitterly opposed Barbara’s choice of a Christian from Florala as her husband, insisting that she had to marry a Jew with better prospects. Later, her mother succumbed to early onset Alzheimer’s.

The politically divisive period of the late ‘60s and early ‘70s were a time of stress between parents and children, and the Gitenstein family was no exception, as those who lived through that time will find familiar.

Gitenstein’s undergraduate years at Duke University, where her beloved brother Mark was two years ahead of her, rings especially true for those who were there.

From her perspective as a former university president, Gitenstein is admiring of the deft way she witnessed Duke’s president, former North Carolina Governor Terry Sanford, handle campus reaction and protest following the 1970 invasion of Cambodia and the killings at Kent and Jackson State universities.

But not all her memories of Duke were favorable.

During sorority rush, Gitenstein records racist comments one sister made about an African American candidate. When Gitenstein objected, she was informed that being Jewish almost disqualified herself the year before.

“I have made some bad decisions in my life but joining a sorority might be the most stupid,” she writes.

The narrative is leavened with an appropriate amount of similar, low-level score settling: a bad boyfriend who left her deeply wounded; obtuse prep schoolteachers and administrators; and duplicitous, senior faculty colleagues.

But Gitenstein is also fulsome in her praise and gratitude for mentors and colleagues for providing support to her when it was most needed, both personally and professionally.

Then there is the strand of Gitenstein’s hard fought rise through the administrative bureaucracy, at a time when there was significant resistance to women in the field. She begins at a Missouri college and, after stints in Iowa, and upstate New York, moves to Trenton, N.J.

Gitenstein’s story illustrates what has almost become a cliché about life on a college campus.

“Academic politics is much more vicious than real politics,” Harvard political scientist Richard Neustadt once told a reporter. “We think it’s because the stakes are so small,” an observation attributed, in one form or another to various habitues of the Academy, from Woodrow Wilson to Henry Kissinger.

Gitenstein credits her husband, Don Hart, a fellow academic, for both his steadfast love and his support of her career choice. In this she echoes the late Ruth Bader Ginsburg’s praise for her supportive husband Marty.

Curiously, there is virtually nothing in this memoir about Gitenstein’s lengthy tenure as president of The College of New Jersey, where she was the first woman president, and the first Jewish president. Perhaps she is saving that for a sequel. One can only hope.