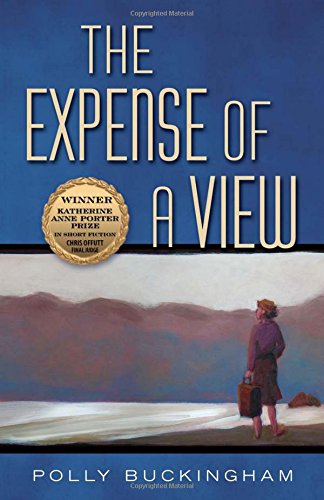 A young couple—Nick and Sheila—bring their baby with them to a large festival full of music, carnival attractions, and performers. Nick needs to take it all in, to see everything—as he’s done with Sheila for each of the last few years. Sheila needs to nurse the baby. Without any drama, they find a shady spot and split up for a few hours. When they reunite that evening, Sheila is spent and weepy. Nick takes the baby and, as they board a bus, promises to be more supportive.

This understated character portrait, “Festival,” is a good example of the 14 short stories in Polly Bukingham’s new collection, The Expense of a View. Across this collection, Buckingham tells small, realistic stories. Most of Buckingham’s stories are about the strains of being a young adult; most are set in the Northwest.

What ultimately makes The Expense of a View a whole that is greater than the sum of its parts is Buckingham’s consistently smart (and slightly sad) narration. Her stories are united by characters—usually talented, young women coping with loss or a difficult relationship—achieving a small measure of peace and grace amid difficult circumstances.

Other commonalities interspersed across several of the stories include: estranged couples, noble pets, unhelpful friends, mental illness, and detours from realism into magical realism. Only a few of Buckingham’s the stories deviate from these commonalities.

One story that deviates quite successfully is “My Doppelganger’s Arms,” in which a lonely woman protagonist meets up with a young woman drifter who is just like the protagonist in many ways. They become intimate on a beach, and then the drifter runs off. The protagonist eventually finds her companion with a needle in her arm against a surreal sky. The reader is left wondering if the protagonist and the drifter are, in fact, the same person.

A story that deviates from Buckingham’s commonalities less successfully is “The Grandmother’s Vision,” in which a grandmother discusses relationships with a family that is too dysfunctional for Jerry Springer, and too disaffected for a Donald Trump rally. While there is empathy in most of Buckingham’s narratives, empathy is notably absent from this story.

Buckingham’s writing is literary and perceptive, but has moments of excess. The paragraph below from “Thinking about Carson” provides an example of Buckingham overcooking her prose:

“Before Oregon, the world was broken up in pieces. Landscapes were broken up into streets and buildings and windows and doors and cars and faces; people were broken apart by words and hands and boots and objects sailing wickedly through the air. Imagine a square and clean kitchen floor covered by glass. Imagine a quiet night, white curtains billowed with a steady wind. You are a child dreaming peacefully. You are woken by unremitting screams, the screams of someone else’s nightmare where the breaking down process is no longer variable but constant.”

In balance, Buckingham deserves considerable credit for bringing a humane voice to difficult topics, and finding the right balance of light and dark in her characters. While The Expense of a View is not perfect, it is ambitious and thought provoking. For readers of challenging literary fiction, this is a worthwhile and enjoyable collection.