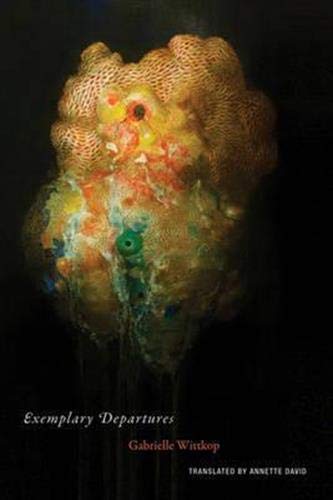 Exemplary Departures by Gabrielle Wittkop brings together four stories of inevitable death. Written with a Ms. Wittkop’s refined verbal excess, subtly pitched between delirious intensity and a sensual fever dream, these stories draw in and seduce with the allure of a poisonous spider. Added to this decadent and gothic ambiance is the trademark gleeful sadism she deploys to dispatch each protagonist in a grisly fashion.

First published in 1995, this new edition of Exemplary Departures is a translation of the 2012 edition. The new edition includes two previously unpublished stories. Except for the last story, all feature characters based on historical figures. Their systematic destruction occurs either through bad decision making or outside forces. In our spoiler-averse age, it is worth pointing out that all main characters described will die at the end. What Gabrielle Wittkop does is allow the narratives to answer these questions, How will they die? Why did they die? For what purpose? Like a good mystery, Wittkop draws out the thread with a slow and deliberate pace. To fully enjoy these stories, they have to be relished.

In the first story, "Mr. T’s Last Secrets," the eponymous Mr. T. vanishes into a Southeast Asian jungle in pursuit of a butterfly. He is never heard from again. The story unfolds in fragmentary fashion. The narrative fragments begin with a lengthy and luxurious description of an Asian tropical rain forest. Then anonymous narrators give their accounts of the last days of Mr. T. These include business associates, gossipy domestics, and others. Interspersed in the mix include innocuous accounts of Mr. T.’s daily life.

But who was this person and why did they disappear without warning? As translator Annette David recounts in her Postscript, “At one time ‘the most famous American in Asia,’ the enigmatic Jim Thompson (1906–1967)—Mr. T.—was a man of many talents: ex-architect, retired army officer, one-time spy, silk merchant, and renowned collector of antiques.” In the opening pages of "Mr. T," the forest beckons with glamour and doom:

“On their way to some carrion or other, a procession of ants moved along a dead tree crumbling in a chaos of liana and fern among which, still intact, bromeliads opened out their bouquets of calyxes, glistening with sap and dew.”

She continues with what could be her thesis statement of Exemplary Departures:

“Nothing was wasted in this cosmos where everything bears fruit and decomposes, swallows, digests, expels, struggles to exist, copulates, germinates, hatches and dissolves so as to grow again and again in an eternal ebb and flow, one after the other. Insect humors travel through the veins of the bark; liquefied, the reptile is reborn in the fetid pulp of fungus; the feather becomes the leaf; the flower changes into a scale; eggs and soft roe burst into liquid myriads; death embraces resurrection, the two of them twinned like day and night.”

The passage reflects Wittkop’s decadent and Sadean heritage. The excerpt resembles the luxurious prose of decadent author Joris-Karl Huysmans, especially the baroque descriptions of botanical exotica in his famous novel, Against Nature. At the same time, the inherent violence and death associated with nature hark back to the Marquis de Sade’s icy philosophy. Sade asserted a merciless worldview involving a cruel and insatiable Mother Nature, a force both amoral and indifferent to the humanity’s alleged dominion over her.

“Mr. T’s Last Secrets” and the final story, “Claude and Hippolyte, or The Inadmissable Tale of the Turquoise Fire,” appear in print for the first time with this collection. In the story “Baltimore Nights,” an unnamed writer wanders around the city made famous by The Wire. Drunk and delirious, he bears all the outward appearance and inner turmoil of Edgar Allan Poe.

Wittkop is particularly sadistic in her treatment of Idalia Dubb, a British tourist in Germany who wants desperately to visit one of the castles along the Rhine. Sheltered, erudite, and romantic, she sneaks away from her parents only to find herself trapped in a tower. She slowly starves to death. One day she witnesses an outdoor banquet, although the diners are unable to hear her cries for help. Here is how Wittkop describes the ensuing banquet:

“There were mussels in cream and tarragon, sea scallops wrapped in cabbage, smoked eels curled into spirals on a bed of bay leaves, Baltic herrings strewn with capers, rosy radishes cut into buds, cucumber with chervil, tomatoes stuffed with prawns, artichoke hearts with olives, it was the edible flowerbed of a French garden where among the salmon’s blossoming pink glimmered agate-colored Colchester oysters.”

The full description of the banquet goes on for nearly three pages. A few paragraphs later during a rainstorm, “Idalia had lapped up a little water. Frozen with fever she could only gather her thoughts into wishing for a warm bed, just a bed, no, at least a blanket, and if not, just a corner of a rag.”

There is an abrupt tonal shift with the story, “A Descent.” Unlike the other stories, “A Descent” is set in 20th century New York City. The story, following the poor life decisions of a salesman, remains tragicomic instead of mordantly sadistic. The last story, “Claude and Hippolyte,” is the only story without historical sources. It glitters with a jewel-like radiance with its account of hermaphroditic twins in pre-Revolutionary France.

Wittkop’s unique writing style has to do with her equally oddball biography. Raised as an autodidact by her charismatic father, she said, “I read Alembert, Holbach, Diderot, Sade, at a very young age. I am a child of the Enlightenment.” She considered herself a bisexual and “when living in Paris, she provided a hideout during the Nazi occupation for her future husband, a German essayist and homosexual deserter, Justus Franz Wittkop.” It is reassuring to read about couples not seduced by the trappings of normalcy.

Like a character out of Exemplary Departures, Wittkop and her husband also had extraordinary deaths. The Parkinson’s-ridden Justus would commit suicide by poisoning himself (encouraged by Gabrielle) in 1986. Gabrielle Wittkop would follow in 2002, committing suicide after being diagnosed with lung cancer. Despite the lurid details of their personal lives, the Wittkops chose to die with dignity, defying the cold indifference of death.