Exceptional America: What Divides Americans from the World and from Each Other 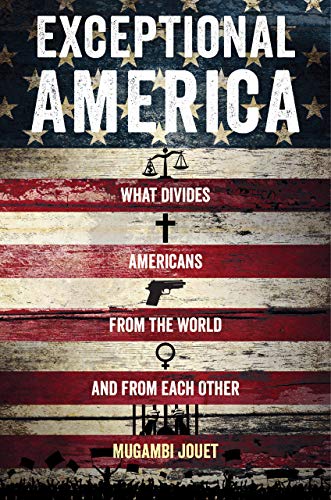 “They are unhinged, mentally ill, and represent a clear and present danger to the world.”

Exceptional America is the type of book with which you have to laugh in order not to cry. Mugambi Jouet systematically explains how Americans are born and raised into an anti-intellectual culture where harsh incarceration practices, Christian fundamentalism, gun violence, and a plutocratic economic structure control the lives of average citizens.

Jouet, a lawyer, reveals in the introduction of the book the strict, Old Testament-style of the U.S. judicial system, in which his client is faced with a sentence far longer than necessary. When Jouet appeals to reason by pointing out that lengthy sentences do little to reduce crime, put a drain on public finances, as well as explaining that rehabilitation is far more effective, the judge shuts him down.

His client is charged six years for a minor, non-violent drug offense. After one reads these first pages, one can hear a gavel smashing down giving judgment, but it isn’t toward Jouet’s client: It is directed squarely at the U.S. criminal justice system. To further his point, Jouet appropriately quotes Camus: “One can judge a society by its prisons.”

Jouet explains that Alexis de Tocqueville was not referring to American exceptionalism as a simply positive characteristic, but that America was exceptional in its uniqueness. Being one of a kind has positive and negative qualities in terms of society and governance.

For instance, conservative America’s fundamentalist belief in the Christian God and the End Times fuels the far-right wing belief that the United States can do no wrong in foreign policy and even domestically. On a positive note, most Americans perceive themselves as classless—or at least part of a broad middle class, in which the industrious can get ahead and egalitarianism is encouraged.

While liberal America tacks very close to European political worldviews, conservative America has moved off the map to the right ideologically compared to other Western nations. As Jouet shows, right-wing America has deepened its commitment toward uninformed policy positions and demonstrates a lack of empathy regarding health care and the pro-life position, as well as a lack of planetary awareness regarding climate change.

In Chapter Six, Jouet devotes time to understanding how Americans vote against their economic interests, blaming anti-intellectualism among right-wingers, and makes an important connection between religious fundamentalism and market fundamentalism.

He also points out how a racial divide due to slavery, segregation, and structural racism has kept white America from joining forces with minorities to form a class-based political identity.

Jouet is also quick to point out that what many Americans call patriotism is really nationalism: believing in the myth of “American exceptionalism,” which is simply a not-so-subtly coded way of saying the U.S.A. is superior to every other nation. There is a knowledge gap regarding world affairs that continues to slide Americans into a more insular, venal attitude toward the international community.

Jouet provides startling statistics about how little Americans know about world geography, history, and international leaders. He does not, however, offer much of a model going forward as to how to stem the tide of anti-intellectualism in the U.S.

Toward the end of the book, Jouet touches on the rise of authoritarian nationalism rising around the world, citing the election of Trump and the National Front’s influence in France. Jouet is very smart, and informed about many nation’s politics and culture, yet he either does not have the inclination or the background to connect the problems of American ignorance, religious fundamentalism, market neoliberalism, and imperialism back to our system of ever-increasing exploitation and inequality due to capitalism.

Jouet offers the tepid liberal trope that Americans, if better educated, should and will accept a social democratic system, citing Sweden and Japan as models where wealth inequality is relatively low and standards of living and general happiness are high.

Unfortunately, although Jouet acknowledges that “social democracy will not lead to utopian societies in America, Europe, or elsewhere,” his mild call for what some call a “New New Deal,” while laudable, will fall on deaf ears. American political leaders, the “elite,” are mentally unfit for office (see Trump, Donald) and are not prepared to listen, take advice, or think rationally, just as in the start of the book, the judge was not willing to heed his well-reasoned argument for a reduced sentence for his defendant.

What Jouet and other well-meaning progressives fail to see is that the U.S. elite are not simply anti-intellectual or market and religious extremists: They are unhinged, mentally ill, and represent a clear and present danger to the world. Jouet’s call for social democracy and redistribution is like the progressive version of Trump’s call to “Make America Great Again,” except in liberal-left form, it would go something like: “Make America Keynesian Again.”

Jouet and other progressives do not want to face facts: Mainstream American culture and its political system are in a steep decline, and reforming around the edges is not going to solve the core issues at the dark heart of neoliberal capitalism. Only a radical restructuring of the economy with a new emphasis on sustainability, the interdependence of nations, and international solidarity with the meek of the world, with transnational bodies able to share resources, food, medicine, and technology, will be able to guarantee a future for all of us.

That would be a truly exceptional path for us to take.