The Evil Princess vs. the Brave Knight (Book 1) 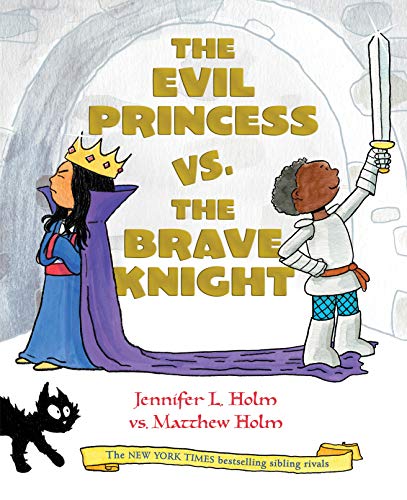 There once was a little girl who went by the name the Evil Princess. She was very mischievous and, well, evil. The Evil Princess had a brother named the Brave Knight. He was mostly pretty brave, except when it came to spiders. They did not always see eye to eye. That's an understatement.

The Evil Princess would trip the Brave Knight whenever she could. And "The Evil Princess wasn't sorry." Their Magic Mirror provided the voice of reason, demanding that "calm must prevail." So both of them got punished.

The Evil Princess spent her time alone practicing being evil. She used the library for inspiration, finding the perfect book: 101 Spells to Torment Annoying Brothers. The Brave Knight, meanwhile, spent his time practicing being brave—sometimes without much success.

But once they are allowed freedom again, they find themselves bored. Until they come upon a great idea. "We need a quest," said the Brave Knight. For once, his sister agreed.

And everything was fine, for awhile, until the Evil Princess's inner nature struck again and chaos ensued. "Their Magic Mirror was not amused."

A hilarious foray into what makes siblings tick, The Evil Princess vs. the Brave Knight is the perfect story to engage siblings and encourage their better behavior—at least for a moment or two. Jennifer Holm and Matthew Holm, a brother and sister duo, turn healthy differences into a tale of giving as good as you get.