Evil Plans: Having Fun on the Road to World Domination 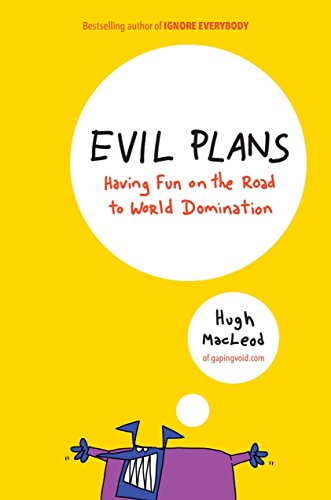 “It has never been easier to make a great living doing what you love. But to make it happen, first you need an EVIL PLAN. Everybody needs to get away from lousy bosses, from boring, dead-end jobs that they hate, and ACTUALLY start doing something they love, something that matters. Life is short.”
—Hugh MacLeod

“. . . This is about us against the system. That system kills the human spirit. We are here to show those guys inching their way on the freeways in their metal coffins that the human spirit is alive.”
—Bodi from the movie Point Break

Bodi knew way back in 1991 that working 9 to 5 for The Man was a precious waste of time and emotional stability. Since earning money is a life necessity, people should at least be doing something they enjoy, and, more importantly, something that benefits them.

Despite the fact that Bodi decided to rob banks to finance his worldwide surfing hobby, he still had the right idea. Hugh MacLeod, however, took a more legal route and wrote Evil Plans in an effort to help others break away from their corporate bondage.

As the old saying goes, “Easier said, than done.” Coming up with a viable idea is the hardest part of going on your own. However, many good ideas started out as potentially futile—Starbucks $4 cup of coffee or the rag-to-riches story of Harry Potter author, J. K. Rowling—but became raging successes—which brings to mind another saying, “You never know until you try.”

Hugh MacLeod’s goal is to help people escape from the 9 to 5 grind. Though the goal isn’t without good intentions, the examples aren’t always so clear. One section entitled “The Twenty”—which discusses the ambition of being a writer—directs the reader to think of 20 important people in their life, then determine how many of them are reading your stuff. Then, taking things a step farther, ask yourself how do you get your stuff on people’s radars. MacLeod’s answer? “By creating brilliant stuff!” A little simplistic and wholly unhelpful—although technically correct.

The above example illustrates one of the negative aspects of Evil Plans—the frustrating lack of specifics. It’s almost like the author is saying, “Ask and it shall be so”. For instance, one of Hugh MacLeod’s friends, a tailor from the famed Saville Row in England, boldly decided to go out on his own. Trying to figure out how to get customers for his new endeavor, MacLeod suggested that his friend blog about suits and he (MacLeod) would “find a way to get the word out.” The website Englishcut.com was created, the tailor—who was the first high-end tailor to do so—blogged away and presto! He now has a three-year waiting list.

However, not all the examples skirt the issue. There are a few sections where good information can be gleaned; most notably the section, “Good News, You Don’t Die!”

What Hugh MacLeod lacks in specifics he makes up for in motivational quips, a bit of brain storming and very funny cartoons.

Evil Plans is less of a “how-to” and more of a “you can, too.” Even though MacLeod doesn’t provide directions step by step, he still gives good advice and discusses solutions that have worked and are currently working for him.

In the end, Evil Plans may not provide all the answers, but it may just put you on the path to finding them.