The Evil That Men Do 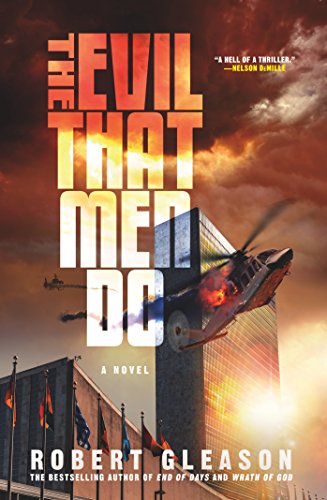 Robert Gleason’s new book, The Evil That Men Do, is a jumble of confusing ideas.

It should be noted right up front that Gleason has designed several of his major characters to be nothing more than thinly transparent copies of Donald J. Trump (J. T. Tower, an oversexed, greedy, psychopath) and Vladimir Putin (Mikhail Ivanovich Putilov, a drugged up, self centered, egomaniac). Add to these characters the recently fired FBI Director, John Conley (James Comey) and you have a cast of characters that are hard to describe, much less believe.

By the middle of the book, the story’s main premise has not yet surfaced. Three possibilities exist: the proposal of UN and US Senate Anti-Inequality Expropriation Bills, designed to share the world’s wealth with everyone, not just the 1%; and/or saving Rashid, a man who provided help to three American agents and has now been captured by terrorists and must be saved; and/or a terrorist cell plans to level New York City and must be stopped.

Now, the issue of the UN and US Inequality Bills? Tower and Putilov both hate it, but Gleason gives us no clue how or even if this will be addressed and/or stopped by the 1%.

Three Americans, John C. “Jamie” Jameson, Elena Moreno, and Adara will take on the task of saving Rashid along with a cadre of mercenaries from and Irish pub.

On another level, investigative journalist Jules Meredith has gathered enough damaging material on Tower to take him down. But Tower determines to take her down first—perhaps with Pulitov’s help. Tower loves Putilov, Putilov hates Tower; hired assassins remove Putilov’s competition in the upcoming Russia election, and Putilov considers the possibility of assassinating Tower as well as putting a contract out on Jules Meredith.

And then there is Danny McMahon, an arrogant TV talk show host who berates Islam every chance he gets; his failing is that he is oversexed and after an encounter with a mysterious woman, he finds himself trussed up in a Pakistani safe house, sharing space with Rashid, where two women are beating the hell out of him. Scenes of physical torture try the imagination and yet the victim of the torture retains his wit through it all. His responses remain cute.

And it is here, after 234 pages, that the reader learns of the plan to nuke New York City. Enter Fahad al-Qadi, hired assassin, designing a plan to “rid our land of the Infidel forever.” By page 318 the reader has no idea how that will be prevented.

Sex scenes are beyond belief and even a hard-core pornography aficionado would find two pages of rutting difficult to get through.

Gleason uses italics throughout the story to add backstory, most of which could be eliminated, and at times the italic font in dialogue only confuses the discourse. Gleason spends many of his words pontificating about politics, religion, terrorism . . . to what end, one wonders.

For the reader who hates Trump and Putin, but loves to self-impose torture, he or she will probably like this book. But if the reader is looking for a fast moving, well-plotted book with characters that are not stick figures, move on to the next book on the shelf.