Everything That Follows: A Novel 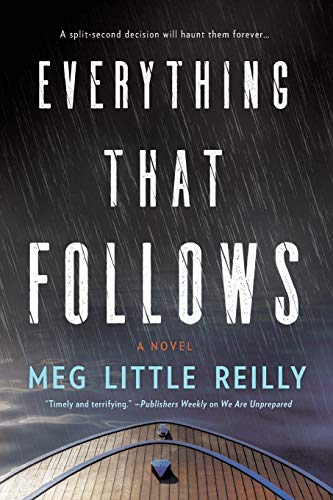 Martha's Vineyard is the setting for this intriguing thriller. Glass blower Kat Weber just sold one of her creations, receiving a fortune for it. She and boyfriend Sean Murphy along with their friend Hunter Briggs go to The Undertow, the local watering hole to celebrate. Around midnight Sean leaves for home, and Kat plans to go to her apartment, but drunk and high on life, Hunter invites her to take a quick ride on his boat. Bartender Kyle, new to the area, accompanies them.

Hunter is inebriated and sets anchor not too far from land and soon passes out. A nasty storm ensues causing the vessel to rock and roll. Kyle, also intoxicated, tries to take advantage of Kat and she becomes frightened he is about to rape her. The next few minutes turn into a blur. One minute Kyle is there then he is overboard.

"Kat stood there at the back of the boat while all the blood in her head drained to her feet. She stared down into the black water trying to see through the dimpling, rain-battered surface to the spot where Kyle had disappeared so quickly. He'd gone down inexplicably fast. She scanned the chop, expecting to see him surface. But nothing. Not a trace."

Panic-stricken, she pleads for Hunter's help. Shocked, they stare into the water, and as the squall intensifies Hunter cranks the engine and heads back to shore. Kat demands they search for Kyle, but he refuses, stating Kyle has probably swum in.

Hunter, a ne'er do well, is the son of a U.S. Senator up for re-election.

Hunter already having too many scrapes with the law begs Kat to remain quiet about Kyle's accident, telling her it could end his father's career. Kat believes this is wrong and they should go to the authorities, but she also fears she will be arrested. Did she push him, did he fall from the impact of the wind, or did Hunter go after him aware of what he was attempting to do?

Hunter swears Kat to secrecy yet she cannot get Kyle's last stricken look out of her mind. Sean doesn't understand why she is acting differently, and she will not disclose her secret. She loves his mom, Orla who took her under her wing and taught her everything about glass blowing. Orla, Sean, and his daughter are the only family she knows and loves. How can she hurt them by divulging this incident?

When Kyle's lifeless body washes ashore, Kat demands they go to the police, but Hunter brushes her off. One of father's employees later offers Kat a bribe to keep her mouth shut. How could she live with herself if she accepted this "blood money"?

As Kat's whole world upends before her eyes, she decides she must make restitution for this horrible disaster, even if it means the end of her happy and fulfilled life. Fear cripples her believing she will be held responsible for Kyle's death.

Kat's well-developed character digs deep into her conscience as she grasps with the tragedy of Kyle's passing, wrestling as to how she can make amends. Though the prose is rather drawn out, one can empathize with the thoughts rolling through Kat's mind and her angst at how to deal with the circumstances. Written as suspense, this novel deals with the moral dilemma Kat faces as she desperately tries to right a wrong, which gives the reader food for thought. How would you act in a similar situation?