Everyday Dorie: The Way I Cook 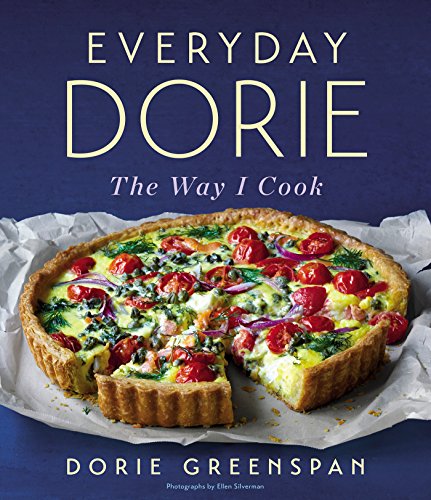 In a crowded field of cookbook authors, there are only a handful who can be relied upon to consistently turn out simple, easy-to-follow, delicious recipes for everyday home cooks. Dorie Greenspan is one of them.

A baker at heart, Ms. Greenspan is perhaps better known for her bestselling baking books like Baking Chez Moi or Dorie’s Cookies, but she is a darn good home cook as well who established those bona fides with her 2010 bestseller, Around My French Table. Now, in Everyday Dorie, she returns to the kitchen to serve up simple, delicious everyday food that would be as company-worthy as it is family friendly.

If you aren’t already familiar with Dorie Greenspan—who by now has legions of devoted followers both young and old—you are in for a treat. She writes recipes even the most novice home cook can follow. For older cooks who grew up with Julia Child, the way she goes about writing a recipe will seem somehow familiar. Like Julia before her, it’s as if she is there in the kitchen with you.

In fact, Dorie Greenspan once worked for Julia Child so her method no doubt rubbed off on her. She takes you through the process step by step without talking down to you. For example, in her recipe Portuguese-Style Cod and Beans en Papillote, she explains how to close up the package of fish in parchment paper (the “papillote”) thusly:

“Lift up the edges of the paper or foil to make a kind of hobo’s sack and tie it tightly at the ‘neck,’ leaving a couple of inches between the ingredients and where you’re securing the bundle.”

That’s the kind of valuable information clearly explained that other writers might have flubbed. When Dorie Greenspan writes a recipe, she cultivates a beginner’s mind, ensuring success for even the most insecure cook among us.

But beyond the way she writes, her recipes taste delicious. That Portuguese-Style Cod and Beans en Papillote, was so good it served as a reminder that some of the best meals can be found not in a restaurant, but at home. The dish is made with cod, white beans and aromatics, but what gave it such character was smoked paprika. And it came together so quickly, that dinner was on the table in just over 30 minutes.

So many of the recipes have something unusual that gives them a certain out-of-the-ordinary feel, which is gold to home cooks looking for something to break up the monotony of their weekday rotations without being complicated or too gimmicky. They are grounded in current food trends like Asian (Sweet Chili Chicken Thighs), Latin (Shrimp Tacos) and, of course the most recent contender, Middle Eastern (no doubt thanks to Yottam Ottolenghi’s bestselling cookbook, Jerusalem). There are—as one would expect from an author who spends part of every year in Paris—also a good number of French inspired recipes as well (the Summer Vegetable Tian was an outstanding dish for end of season tomatoes).

This is what makes Everyday Dorie so compelling. She doesn’t just stick to one style in her cooking. Just like the rest of us, she is constantly trying out new dishes and expanding her repertoire.

But it was two of the Middle Eastern influenced dishes that were (to this home cook) the standouts of the recipes sampled. The Roasted Squash Hummus was an inspired take on a similar squash hummus found in Jerusalem, but whereas Ottolenghi uses garlic and date syrup, Greenspan substitutes those ingredients for za’atar (a widely available Middle Eastern spice mix) and pomegranate molasses. Either way, squash hummus is terrific whether served as a dip or spread on a hunk of bread to be eaten at lunch with a soup or salad.

Then there was the Mediterranean Shepherd’s Pie. (Who among us doesn’t love a good, comforting shepherd’s pie?) This one though, as the title suggests, has Mediterranean (read Middle Eastern) flavors like cumin, za’atar, sumac and harissa paste. Make it with ground turkey, lamb, beef, or chicken and top with either white or sweet mashed potatoes and the world will seem right again.

Come to think of it, Everyday Dorie just might be the antidote for everything that’s gone wrong in the world. And because it’s just right for both novice and experienced cooks alike, it is a strong contender for the must-have cookbook this holiday season.