Every Now and Then: A Novel 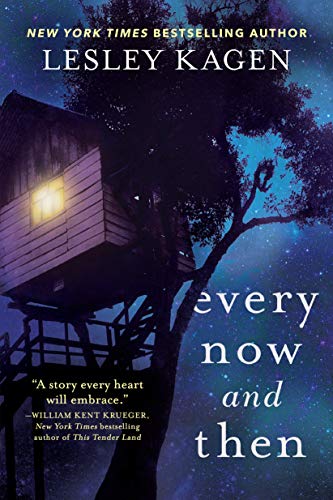 “this story sends a message of the bygone days, while offering laughter, insight, fear, pain, and a deep and abiding friendship.”

1960 in Summit, Wisconsin turns out to be one of the hottest summers on record, but best friends, Elizabeth "Biz" Buchanan, Vivian "Viv" Cleary, and Frances "Frankie" Maniachi manage to find plenty things to do to occupy their time. They compose a "to-do" list of things they want to accomplish by the summer's end and won't let anything or anyone deter them.

Having lost her mom when she was born, Biz she is being raised by her aunt, Jane May Matthew,s a nurse, and her physician father, who goes by "Doc." Viv's parents own the local funeral parlor and the beauty shop on the "white side of town." Frankie, whose white father is unknown is the daughter of a black woman whom the Maniachi's hired as their housekeeper. Because Frankie can pass as an Italian, they state she is their long-lost cousin, for, during that time, she would be shunned and sent to live in "Mud Flats," the black section.

Biz and her eleven-year-old "blood sisters" call themselves "The Tree Musketeers" and spend most of their in the treehouse hideaway in Biz's back yard. Like many youngsters, they are always looking for adventure, even with Jane May's watchful eye trying to keep them on the straight and narrow.

When they aren't enjoying the air conditioning and cool treats at Whitcomb's Drugstore, shopping at the five-and-dime, swimming in the creek, or shrieking at scary movies at the Rivoli Theater, they can be found sneaking around Broadhurst Mental Institution. Biz finds it creepy, yet exciting to watch the patients, and they love to spy on them when they are outside. Their friend, Jimbo, is an orderly there and sneaks them into the facility to help Bigger, the cook. This way, they hope to attain an inside scoop on what is going on after hearing gossip about strange operations being performed on the inmates.

Things become more intriguing when Wally Hopper, the killer of three young girls, is transferred to the asylum. The townsfolk are up in arms about this, fearful for their own children, and plan a meeting to have the place shut down. Though forbidden to attend, the trio creeps unnoticed into the town hall and manage to catch the proceedings by hiding in the rafters above the stage.

Biz is fascinated by the people committed there, she wants to learn more about the mind of an insane murderer, and she hopes they don't close the hospital. Their curiosity gets the better of them, and they sneak around the outside fence, spying on the patients.

Frankie, whom they sometimes call "Frankenstein" and Viv always seem to be at odds with each other, making Biz the referee to their arguments, yet the three are extremely close. What one doesn't think of one of the other does, and they realize they are disobeying Jane May's rules, but nothing stops them. If caught, Viv manages to come up with plausible excuses and/or lies to get them off the hook.

One night, the siren sounds notifying the townsfolk there's been an escape from Broadhurst. Three patients manage to breakout, injuring Jimbo. Frankie, who is especially fond of him, begins to fret:

"Around the time the last train came rumbling down the tracks, we’d grown accustomed to it cooling down some, but that night it seemed to grow warmer with every step we took. I didn't take heed of that harbinger at the time, but looking back at it now, I know that what Aunt Jane May had warned us about at the beginning of that hot summer was true. Satan had fled hell so fast and left the door open behind him because he knew where there were young souls available for the picking, and that was the night he was coming to get ours.

"The town had fallen into a scared silence beneath a moonless sky, and the air was so hot and thick that it dampened the crickets and frogs and the other night sounds to near nothing as well. Or maybe those creatures of God were sensing that evil was on the prowl, and they didn't want to give their hiding places away. Had the girls and I known what was about to happen, we would’ve  followed their lead, but as we climbed the wooden steps that night, what was on our young minds was Jimbo lying in that hospital bed, the escaped patients, and the bizarre story Bigger had told us at the park."

Every Now and Then is a wonderful coming-of-age tale narrated by Biz, depicting how different the world was 60 years ago compared to now regarding the topics of racism, mental illness, and homosexuality. However, these matters did not deter them from accepting things considered unacceptable back then. Each of the many well-depicted characters are fleshed out giving them unique personalities. It is refreshing to read about the norms from then, complete with phrases and comments evocative of the 1960s. Though this enjoyable novel could have been edited somewhat better, this story sends a message of the bygone days, while offering laughter, insight, fear, pain, and a deep and abiding friendship.