Every Minute Is a Day: A Doctor, an Emergency Room, and a City Under Siege 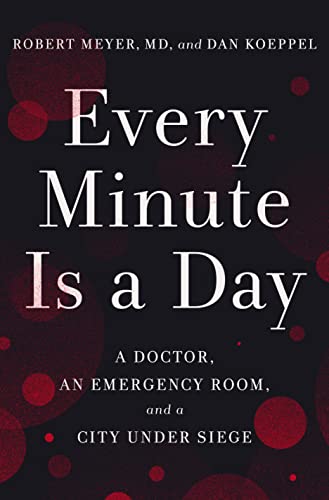 “Their stories of self-sacrifice, professional dedication, and unconditional compassion for everyone who came through the emergency room at MMC are true profiles in courage.”

Dr. Robert Meyer has been an emergency room doctor at the Bronx’s Montefiore Medical Center for 20 years. The hospital is among the busiest in the nation, treating 275,000 patients annually.

Dr. Meyer and science journalist Dan Koeppel have written Every Minute Is a Day, which chronicles the first months of the Covid-19 pandemic. The book bears witness to what confronted the doctors, nurses, residents, EMTs, and medical support staff to their collective unflagging response in responding to a deadly pandemic. The closest analogy to the medical circumstances they were suddenly faced with would be a triage hospital during wartime facing an unknown enemy.

Dr. Meyer was keeping a personal record of what he was seeing in those first months as a way to process the stress and emotional trauma he was experiencing. He sent his daily journals to Dan Koeppel to organize and edit into a true record of the events of those crucial first months of the pandemic.

By the end of March 2020, even the vast medical resources at MMC as well as its satellites facilities and emergency services, were being completely overrun with patients with an unknown, highly transmissible pathogen spreading exponentially, with a spectrum of life-threatening symptoms.

Like many of MMC’s doctors, nurses and technical staff trained during the worse years of the AIDS epidemic, and other citywide emergencies including the 9/11 terrorist attacks that paralyzed the city.

Montefiore treats the many nationalities and ethnicities that populate the Bronx. It is also at the forefront of pro-active, specialized emergency room procedures and a top training hospital. His staff was used to managing a high volume of patients, but nothing had prepared them for this.

Patients in ICU on ventilators were unable to see family members in their last moments, medical staff staying with them even on their off hours so they would not be alone.

The emotional trauma that all the MMC staff faced was unprecedented, and many of them were sequestering from their families to protect them from possible exposure.

Throughout the book, Dr. Meyer writes of the courage of patients and that of MMC’s chief medical staff that he witnessed working tirelessly, and holding it together to do their jobs under the circumstances. These are profiles in courage and inspiration that cannot be ignored.

The stress, depression, and pressure they faced was similar to going into battle without the weapons to protect yourself. And many front-line workers have undoubtedly been living with symptoms of PTSD and still soldiering on.

MMC’s standards of “total patient care” were set by the Dr. John Gallagher, mentor to Dr. Meyer and Dr. Deb White, Medical Director of Emergency Services, both who administered Gallagher’s credo to “treat the person, not just the disease.” Dr. Gallagher was on the verge of retiring when he contracted Covid and was isolating at home with worsening life-threatening symptoms. When his wife couldn’t reach him, Drs. Meyers and White came to the rescue, not letting him give up, and administering their mentor a taste of his own medicine that saved his life.

It is truly odd to read any nonfiction book these days that the politics of division driven by a twice impeached president doesn’t surface. Yet, except for a single passing reference, politics doesn’t come up in this book. And the reason would be that the front-line workers at Montefiore were too busy saving lives.

Meanwhile, for months, media outlets were less focused on the grim realities of what hospital workers faced, as much as they conflated every twist and turn of political posturing around the crisis when the real headlines should have been the life and death realities that were playing out minute by minute for thousands of Covid patient.

Medical workers were dealing with such intolerable issues as the lack of personal protective equipment and even harassment from fellow citizens who refused to believe the hard medical facts of this deadly virus.

Every Minute Is a Day is a profound testament to human rights and dignity, compassion and unity by the people who had the most to lose just trying to do their jobs.

Their stories of self-sacrifice, professional dedication, and unconditional compassion for everyone who came through the emergency room at MMC are true profiles in courage.