Every Good Boy Does Fine: A Love Story, in Music Lessons 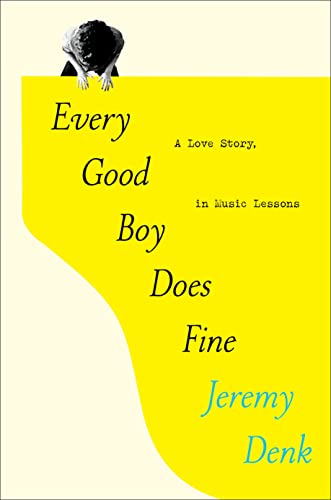 By the time Jeremy Denk was five-and-three-quarters years old, his elementary school career was in trouble. At a conference with his parents, a teacher explained that he read all the time, didn’t socialize, and had delivered a “tearful, vengeful soliloquy to the entire student body” asking for his stolen lunch money to be returned. The teacher suggested he needed to be occupied.

Like many a nerdy kid before him, Denk found refuge in music. He began piano lessons, while continuing to overachieve in science, math, and writing. The adult Mr. Denk used this last talent to describe both music and the process of becoming a musician, in his book, Every Good Boy Does Fine.

Indeed, Denk did do fine at his chosen career. Now in his early fifties, he’s accomplished what every conservatory pianist dreams of—recordings, recitals, concertos—as well as conquered many writerly dreams, publishing pieces in the New Yorker, The New Republic, and The Guardian. (Just to spike the ball, he also won a MacArthur Genius Fellowship.)

Denk’s memoir is one that’s so honest and beautifully written you want his childhood to have been longer so the story would never end. Speaking of his parents and teachers, he is funny—"two Freudian orchestral discs, my Dad’s favorites: Saint-Saëns’s Organ Symphony and Mahler’s Titan”—and sad—“My whole summer had been men yelling at me.” Sometimes he’s both—“Drinking had by that point become Mom’s true discipline, demanding daily repetition and devotion—just like my piano playing.”

In one early chapter, Denk leaps ahead in time to discuss what he calls one of his “memorable mistakes”—a memory slip while playing with the Philadelphia Orchestra. “For a blank moment I had no idea what the harmony was, where it was going, there on the stage of Carnegie Hall. . . . Non-performers can’t perhaps associate with this species of moment: it’s not just that you’re screwing up then and there, but that your whole life is pointless.”

Initially, it feels like a twist on a coming-of-age memoir: instead of showing us small successes leading to ever-larger ones, he catalogues failure after failure throughout his childhood and early education. If his career as a pianist was unknown, it would be tempting to think he was destined to become a scientist who once dreamed of performing in Carnegie Hall. Instead, he’s building a case: failure is a gift; it’s a musician’s greatest teacher. The true talent lies in the ability to endure these lessons.

The other constant in the memoir—as in a musician’s life—is practicing. What exactly does a pianist do for hours and years in those solitary caves? Peering through one of the narrow windows, a non-musician would observe the hours of repetition involved in teaching muscle memory to fingers, hands, and arms, and mistake practicing for an athletic endeavor. Yet even within the category of “technique,” there are experiments to perform, and decisions to be made. After a lesson with his mentor, he explores technical possibilities: “When I was playing octaves in Liszt, he wanted my arm to resemble a sewing machine, with up-and-down linear simplicity. But other times he wanted curves, circles, spirals. He always said that each solution was only one solution . . .”

Denk lets us inside his head. He breaks out perfect metaphors to describe concepts of harmony, melody, and rhythm. As an Oberlin student, he made a discovery: “I realized that Sebok had opened this door in me to metaphor. He’d given me permission to use a tool I’d always had.” Denk has it in his description of his first, graffiti-covered piano: “the ivory keys were yellowed and chipped, like eighty-eight British teeth.” Through metaphor, he performs the feat of a trilingual interpreter, translating the culture and language of the piano both to other instrumental musicians and to non-musicians.

There’s another level of interpretation, the first and most important one: the executive decisions made by the performer based on the written music. It’s a process that becomes visible to the listener only when it emerges as interpretation.

The performer translates from the written music—the intention of the composer—to himself. “the written page of music,” says Denk, “was a treasure map. It had messages from the composer and from the past, telling you just enough to figure out the rest, hints and clues to make the piece live in the present. You didn’t obey them because the teacher said so, but because they showed the way.” As an example, he discusses the information contained in a slur: “Slurs look like an arc, and imply a journey . . . It tells you when to start, how long to continue, and when to let go. How often in life do you crave to know all those pieces of information?”

For all that is contained in musical notation, Denk comes to realize this about the musical score itself: “In some ways, for all its virtues, it doesn’t want to be seen. It ‘is’ the piece, and yet its most important task is to disappear.”

It’s like writing. The written word “is” the book, yet because of Denk’s humor, beauty, and insight, you forget you’re reading. You just enjoy the story.