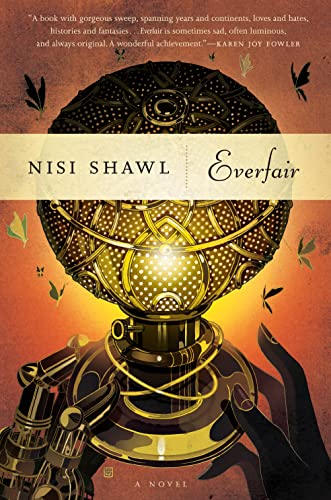 “Nisi Shawl’s debut is an ambitious, fresh take on the steampunk genre . . .”

Everfair reads less like a novel and more like an alternate history journal, a re-imagining of one of history’s darkest periods, with a light steampunk twist. Nisi Shawl has written a high-concept epic in which European socialists, African American inventors, religious leaders, and freed slaves have united against the oppression of Belgium’s King Leopold II, who during the late 1800s, exploited the resources of the Congo and committed human rights abuses that led to deaths in the tens of millions.

Shawl states in the beginning historical note, “I like to think that with a nudge or two events might have played out much more happily for the inhabitants of Equatorial Africa.” The novel is based very loosely on historical events, the events pivoting on the creation of a Utopia for those being oppressed by Leopold or fleeing slavery in the Americas. Sprinkled throughout are steam-powered dirigibles and brass and gear prosthetic technology that gives the novel a subtle steampunk feel.

In contrast to the time period, Shawl also creates a society in which “We live in freedom by sharing all things equally,” a stark contrast to the imperialism and capitalist ideals of the time and a refreshing departure from traditionally Western political structures in storytelling. The Fabian Society is an actual European Socialist movement that existed during the timeline of Everfair, and in the novel, is the aristocratic, Caucasian face of the settlement to supporters in Britain and other areas of Europe.

Daisy and Lisette, two women brought to Everfair by their Fabian Society husbands, become more significant to the settlement than their male counterparts, and eventually, are lovers separated by heartache, loss, and the gender constraints of their time. Shawl acknowledges the misogyny, racism, and oppression of the era, yet creates society where restrictions on who one can love and who can lead are, for the most part, disregarded without becoming too convenient for the sake of plot. The relationships between characters are genuine.

Everfair is divided up into scenes. Each scene is told in the third-person point of view from one of a dozen characters, with linear time jumps from the previous chapter that range from a few months to a few years. The time jumps create a rather disjointed narrative that is still engaging, but cuts into the tension and conflict significantly. This is not a book that readers will fly through to get to the next chapter. If the classic thriller is a shot of whiskey, Everfair is more like a cup of strong tea.

Character development is definitely Shawl’s strength, with a diverse cast that includes many strong, complex female leads and characters that destroy fantasy and literary tropes. However, the large cast of characters also hurts reader engagement. Combined with the vignette feel of the chapters, it is difficult to get invested in the larger plot arc.

Development is rich for the short time the reader spends with each character, but the lack of a single, clearly central, protagonist feels intentional. Everfair is a symbol of prosperity and a future for a collective, not an individual, and the style does serve to distract away from specific character agency and more toward the journey and progress of the entire settlement.

However, the political structure in Everfair evolves in a way that flows throughout each chapter and creates the main point of conflict and tension. The new nation itself becomes a character, its growth the ebb and flow of a society that changes through the influx of new cultures and ideas and is vulnerable to sudden, violent power shifts. At any point the fragile power structure could tear apart, either internally or from external foes.

Nisi Shawl’s debut is an ambitious, fresh take on the steampunk genre that could inspire an entire generation to rethink how the world could change from a single turning point in the past. One can only hope that the diverse voices coming out of speculative fiction will inspire others to explore events of the past that have so far been ignored by storytellers, and for the most part, actual historians.