The Event of Literature 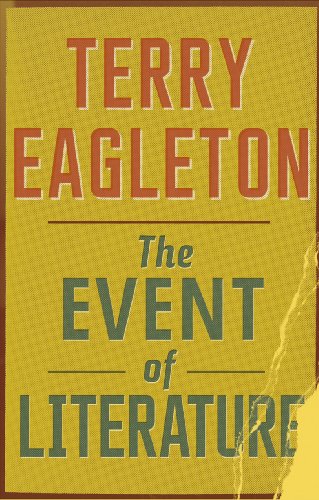 The question, What is literature?—the subject matter of literary theory—is not frequently posed by either writers or readers. Yet it is an existential question resonating equally with more ancient questions about the meanings of love, trust, and life in general.

Dedicated readers and writers will ultimately want to know what it is that moves them and will be curious about the alchemy of reading and writing, even if knowing from the outset they will never get a definite answer—itself a good thing, since literature, unlike technology, cannot be replicated on the basis of a prototype.

Terry Eagleton’s book The Event of Literature assumes a philosophical perspective. He begins with the opposition between realism, on the one hand, and nominalism, on the other, in order to take a critical look at literary theories what each has to say about the nature of literature. He also looks at the defining features of literary theories.

According to Mr. Eagleton, the majority of literary theories are nominalist in that they focus on particulars rather than universals: there is no one single or essential form of literature, but rather literatures, just as there is no single defining feature of literature but several. This said, not everything goes.

In practice, or, empirically, the author contends, “When people . . . call a piece of writing literary, they generally have one of five things in mind, or some combination of them. They mean by ‘literary’ a work which is fictional, or which yields significant insight into human experience as opposed to reporting empirical truths, or which uses language in a peculiarly heightened, figurative or self-conscious way, or which is not practical in the sense that shopping lists are, or which is highly valued as a piece of writing . . . We may call these factors the fictional, moral, linguistic, non-pragmatic and normative.”

And yet—how does fiction relate to what is real? How is literature moral but not moralizing?

Is literary language the same or different from spoken language or that used in other writing? How does form matter?

Is what is said different from how it is said? What constitutes an “aesthetic effect”?

How important is the literary canon for establishing value? How radical must or should literature be?

These are some of the questions one is confronted with when trying to open the treasure box called literature—and the answers are mostly equivocal, and not just because literary theorists like to disagree.

Nevertheless, literary theorists do agree about one thing: “. . . the idea of the literary work as a strategy,” that is, of distancing oneself from the real in order to better relate to it; of using imagination as in dreams to arrive at wish-fulfillment; of seeking a reply to a cluster of implicit questions or reconstructing a question in order to shed light on the answer.

Yet none of these strategies would work without a reader. This is also why Terry Eagleton prefers to think of literature as an event rather than an object—indeed a performative and transformative event involving the “Holy Trinity” of author, work, and reader. In this view, the text acts as a set of instructions for the production of meaning or for experimenting in dialectic manner with different ways of coping with and making sense of real, conflicting situations.

Seen from this perspective, the event of literature shares several features with psychoanalysis as a space for self-discovery and realization.

The Event of Literature provides an engaging overview of the key questions regarding the nature of literature and of the various answers provided by literary theory.

What is missing in an otherwise interesting excursion—perhaps a problem more generally of both literary theory and the philosophy of literature—is how the event of literature is shaped by sociological, historical, and market forces, and how these in turn impact its trajectory across time—including its genre diversification and the hybridization of styles.

These are the questions that still need answers.