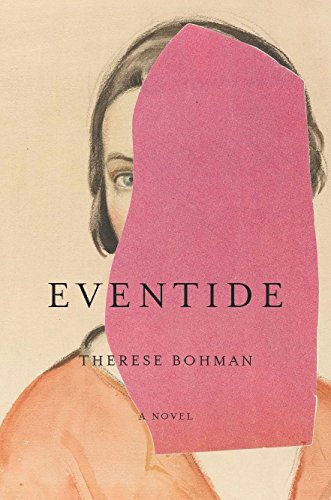 Although slender in scope, Eventide by Therese Bohman scales one woman’s life experience in three dimensions. Bohman’s protagonist, Karolina Andersson, grapples with many facets of her life, including the mundane internal quarrels about her “biological clock,” her career, her failed romances, and her future.

The reader travels through Karolina’s thoughts as a clutter of stream-of-consciousness, much like the reality of the impressions of our day-to-day life that move rapidly from one idea to the next, with only thin threads of connectivity.

Bohman shares most of Karolina’s waking moments in this manner. There are few moments of dialogue, which are often the most interesting parts of the story. Lurking in the internal moments of Karolina’s life is, at times, tiring.

The reader is challenged to follow the gossamer threads of the story as conveyed through Karolina’s thoughts, as these thoughts often digress from the storyline, which itself is often opaque.

The story is set primarily in the university at Stockholm, Sweden, where Karolina is a professor of art. She has been assigned the challenging task of directing Anton Strömberg, a doctoral candidate, through his dissertation process. Her meetings with Anton are sporadic at best, and his enthusiasm for doing the required work is lacking.

As we get to know Karolina, her failed romances at times take center stage. Her relationships with Karl and Ander fill her with remorse. Karl, as an oftentimes controlling ex-partner, and Ander, a married man with whom she has a brief fling, are relationships that she regrets and yet ponders often.

Her thoughts often veer off in unusual directions as she considers things such as experiments with apes and traumatic events with ferries crashing into towns. And yet, as the human thought process often goes, these thought mazes are accepted as normal.

It is at times difficult to maintain the interest that this book deserves because of the internal narrative of the main character. She often thinks that she drinks too much; she does not like traveling; she is “incapable of sorting out her life.”

Karolina is an internal person; she has few friends, and none of them are women. “She had never spent a great deal of time with women; she hadn’t had many girlfriends when she was younger, and now she had none.”

As Anton weaves his way through the story, Karolina finds herself drawn to him, physically—a situation that culminates in a one-night romantic entanglement. And yet again, Karolina has no permanent attachment to this man.

After a brief visit with her parents, Karolina comes to an understanding about herself and her life: “My life is pathetic. Something has to change.” The reader would agree and cheer for that change to appear.

After reconnecting with Ander, the man she felt she truly loved, and his, again, rejection of her, she dips to her lowest ebb. ”That this was the kind of person she had become, hard, atrophied inside. . . . it occurred to Karolina that it was life she was waiting for. Life that came to everyone except her.”

As Karolina’s story winds down, that “something” that had to happen gently emerges from the depths, and she finds a small limb that she can grab onto and begins to claw her way back to reality.

There are moments when the clutter of Karolina’s thoughts drags the reading almost to a halt, but taken on the whole, the book puts us in mind of our own thought processes and the many directions they take on any given day. The book is a good read for when there is plenty of time and few distractions.