Eve Out of Her Ruins 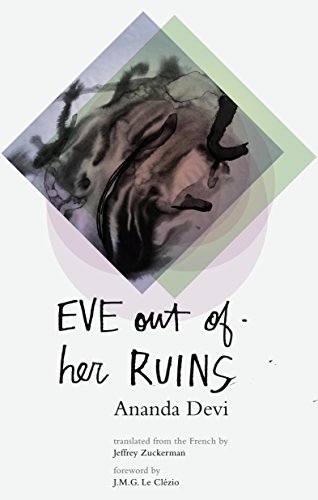 Set in the criminal shadow world behind luxury hotels, Eve Out of Her Ruins by Ananda Devi follows four friends in their attempt to transcend the poverty and violence of their surroundings. It takes place in Mauritius, a small island in the Indian Ocean east of Madagascar. Known for its beaches and a vacation destination spot, Ms. Devi’s novel focuses instead on the forgotten underclass. Eve, loved by both Savita and Saadiq, wanders this twilight realm using her body as a weapon. Savita loves her unconditionally. Clélio, a rebel, wants desperately to escape this place.

Winner of the Prix des cinq continents de la francophonie in 2006, the novel possesses “gorgeous hewn sentences [that] rarely shy away from depicting violence or suffering,” as Jeffrey Zuckerman states in his Translator’s Afterword. Beyond the violence, the novel smolders with sex. This isn’t the sex of titillation but as another means of escape or empowerment, yet another opiate to numb the despair. Chapters alternate between Eve, Savita, Saadiq, and Clélio. Like As I Lay Dying, Devi gives each an individual voice and the four voices then coalesce into a larger picture.

Saadiq talks of Eve and Savita with a mixture of jealousy, arousal, and poetic beauty, “When they run into each other on the street, Savita’s family looks away from Eve as if they’d just seen two dogs in heat, but still the two girls’ eyes meet and lock on one another. . . . This smile between the two of them, bronze eyes meeting black, a quiver of light that disappears before it starts to gleam, almost a shared rivulet linking their lips, this smile is a doorway toward a place only the two of them know. Just between girls: we sparring cocks wouldn’t know anything about it.” Devi’s writing is reminiscent of another master of French prose: Jean Genet. Like Genet, she turns hellish the circumstances of the Mauritian underclass into passages of supreme linguistic beauty.

With a foreword by Nobel laureate J. M. G. Le Clézio, Deep Vellum continues its commitment to bring compelling novels from otherwise obscure locales. As Le Clézio states in his foreword, “Mauritians have coined a term for those living on this island a name says everything: population générale. Neither this nor that, neither black nor white, neither Creole nor Hindu.” Zuckerman echoes this when he explains how calling Mauritius “part of Africa feels simplistic. . . . It has been colonized successively by Dutch, French, and British explorers[.]” He also talks about how the island’s population includes a diverse ethnic composition of Western European, Eastern African, Indian, and Chinese. Eve Out of Her Ruins exists in a multiethnical liminal space, a multipronged love story that won’t fit into the usual continental box. Is it neither African or Indian literature, yet it is also both. It is a product of global capitalism, but it is also a story of those capitalism leaves in its wake. Karl Marx called the masses of unemployed as the “reserve army of labor.” Ananda Devi profiles these foot soldiers, armed and dangerous, and desperate to escape.