Eva and Eve: A Search for My Mother's Lost Childhood and What a War Left Behind 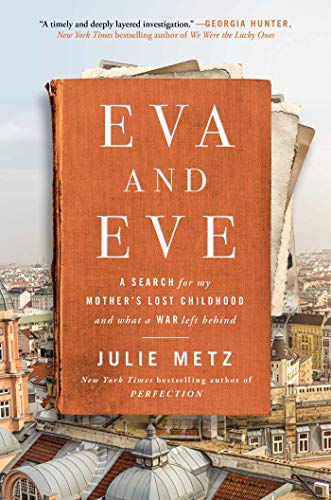 “In Eva and Eve, Julie Metz reminds her readers that time and opportunity are not infinite, and that good people must be ever vigilant in opposing tyranny.”

Julie Metz opens her book with a black-and-white photograph of a young girl. The intensity of the young girl’s dark eyes conveys that she is “fiercer than her sweet presentation.”

This fierceness will be needed. She lives in Vienna, and devastating danger looms close: “In two months this girl’s country will be taken over by a cohort of extremists led by an authoritarian germophobe who hates people of her kind.”

This young girl is Metz’s mother, Eva, at nine years of age. “I knew her as Eve.”

Eva and Eve, with the comprehensive subtitle A Search for My Mother’s Lost Childhood and What a War Left Behind, is an enveloping, heartbreaking memoir. It is also much more, functioning with thoroughness and ease as a history lesson, a detective story, a travelogue, a saga of understanding and forgiveness, and ultimately, a cautionary tale for our times and all times.

In 2006 Metz’s mother was dying of cancer. Eve Metz is the classic New Yorker, “steely, savvy, thrifty, pragmatic.” She and her husband are retired from successful careers in the art department at Simon & Schuster. She rarely speaks of her childhood.

Metz and her mother fought almost daily when Metz was a teenager. As an adult, Metz tried to love her mother, “but at a distance.” After her mother passes, Metz finds among her possessions a keepsake book with goodbye wishes in German from childhood friends to her mother. Metz begins wondering “about the Eva I had never known.” She regrets not asking her mother more questions about her youth while she had the chance, a longing which will speak to many readers who also fail to avail themselves of that opportunity with their parents.

Metz’s search for knowledge of her mother’s life in Vienna, as well as her grandparents’ and uncles’ lives there and their journey to safety before escape from Austria became impossible, will bring her to that imperial capital for multiple visits. Along the way, she will be helped in her research by Austrians seeking to atone for their country’s crimes.

Metz takes her readers with her on her multi-leg journey. Her prose is evocative and encompassing. One of the trips to Vienna is taken with her teenage daughter. On the flight over, they are not speaking. The generations change, but, as Metz acknowledges, the conflicts often remain achingly similar: “My mother deserved a sincere apology, wherever she was now.”

Metz goes back and forth in time to share the phases of her relationship with her mother and of many aspects of her own past and present life. She devotes sections of her book to telling the stories of her grandparents’ lives. Her grandmother’s first fiancé died in World War I. Her grandfather had a printing factory and a patent for creating packaging for medicine. This packaging was important to the Nazis and helped save her grandfather from the concentration camps.

The sections in the book describing the German annexation of Austria in 1938 and the unleashing of anti-Semitism on Vienna and on Eva’s family convey the terror and horror of those times. Her grandfather is forced to sign away his share of the business. Her uncles must flee to London when a fascist neighbor threatens to denounce them.

For Metz, the historic is deeply personal. Metz shares many striking black-and-white photographs from the lives of her mother and her mother’s family. She looks for information on the foreign service officer who granted her grandparents and mother visas to come to the United States, thus helping to save their lives. She imagines what the interview with the foreign service officer was like. This section reads much like a Robert Ludlum novel—high praise, indeed.

Metz travels to Trieste from Vienna to experience a trip akin to the one her mother and grandparents took to get to the ship that would take them to New York. She shares excerpts from the captain’s log chronicling weather conditions and shipboard events during her mother’s and grandparents’ journey.

Metz’s mother and her grandparents spent 14 days on Ellis Island because immigration officers thought her grandfather was senile. Metz conjures what this was like for them; deportation would mean death. Their family members who did not flee Austria because they thought no harm would come to them would perish in Dachau and Buchenwald.

Metz closes her family’s story during the quarantine of the COVID-19 pandemic. As she has reminded her readers at various points throughout her narration, anti-immigrant rage has been exploding in the United States since before the ascendancy of Trump, while a similar isolationist cruelty is being embraced in Europe and England. And yet hope comes from a most unexpected and tragic source: the protests and outrage in reaction to the murder of George Floyd. This is a crime that echoes the brutality and injustice in her mother’s young life and it, too, cries out for redress: “When those who have suffered persecution feel that they belong, that their lives truly matter, we will all live more truthful lives.”

In Eva and Eve, Julie Metz reminds her readers that time and opportunity are not infinite, and that good people must be ever vigilant in opposing tyranny. These are lessons to be learned and remembered.