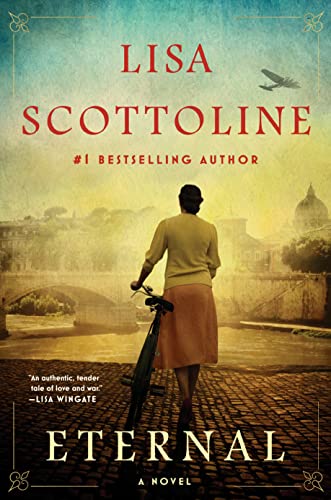 “Eternal is a heart-wrenching but ultimately triumphant novel of friendship, love, and loss that will take the reader on a journey to the past while leaving many questions to ponder about the future.”

It is the autumn of 1937, and Mussolini has passed a series of anti-Semitic laws throughout Italy. For lifelong best friends Elisabetta, Marco, and Sandro, these laws mean a drawing of alliances, of betrayal, of heartbreak, and of lost tomorrows. Elisabetta sees her dreams of becoming a novelist overshadowed by the threat of war. Marco uses his skills as a winning cyclist to aid the government, and Sandro loses all hope of attending university as a math prodigy and becoming a professor. When their city of Rome is invaded by the Nazis, they must choose between allegiance to their families and to each other.

In this coming-of-age drama by crime fiction writer Lisa Scottoline, friendship turns into romance when both Marco and Sandro declare their love for Elisabetta. She has known the young men her entire life. They are inseparable friends. How could she possibly choose between them?

Desperate to save her relationships with them, Elisabetta tries to hold onto the special bond the three of them have, refusing either while holding tightly to both. Unfortunately, Sandro sees more and more clearly the writing on the wall and knows that his freedom and the chance to win the heart of his devotedly Catholic friend are nearing an end. Marco, on the other hand, lives in denial that the Nazis are a danger and follows his father’s lead in becoming a fascist.

When the men, women, and children in the Roman Jewish ghetto are rounded up by the Nazis in October of 1943, they all are forced to make decisions that will alter their lives and the lives of those around them.

Lisa Scottoline’s crime novels have captured the attention of readers around the world, but what of her foray into historical fiction? The combination of Scottoline’s skillful and poignant writing with detailed historical events and unforgettable characters set against the magnificent backdrop of the Eternal City does not disappoint. Amid a market saturated with tales of World War II and wartime romances, Eternal brings into focus the real-life dilemmas of those who have to carry on with their lives during war and the consequences that even the smallest decisions have on their lives and loved ones.

Throughout the novel, fact runs alongside fiction as the reader meets authentic villains and heroes of the Nazi’s Roman invasion. Sandro’s mentor at the university was Tullio Levi-Civita, a real professor in Rome who was arrested and taken to Auschwitz. While Sandro tried in vain to continue his studies and become a mathematician, he witnessed his mentor’s fall from esteemed teacher to reviled captive. The scenes between the professor and his protégé represented many such scenes that no doubt took place during that time of upheaval and uncertainty.

Dr. Giovanni Borromeo, Lieutenant Colonel Herbert Kappler, Monsignor High O’Flaherty, and Baron Ernst von Weizsäcker were also real people who did terrible and wonderful things respectively. Scottoline does a superb job intertwining their real-life exploits and heroics with the lives and predicaments of Elisabetta, Marco, and Sandro. Often, the reader is allowed to be transported back into time as a witness to conversations and actions that actually took place while, at the same time, envisioning those that might have been had these three young people lived and interacted with these historical figures.

There are many times throughout the story when the reader empathizes with the choices Elisabetta must make. Sandro is the poet and dreamer that every woman longs to find, but a future with him would be dangerous and difficult. One finds it hard not to root for this pairing even with the knowledge that the odds are severely against them. Though Marco takes the path of pain and destruction, the reader can’t help but cheer for him as well, praying along with Elisabetta that he opens his eyes and changes sides. When the unthinkable happens, Marco is faced with the ultimate decision. Will he choose his father and the men who give him orders, or will he choose his love for both his friends?

Eternal is a heart-wrenching but ultimately triumphant novel of friendship, love, and loss that will take the reader on a journey to the past while leaving many questions to ponder about the future.