The Essex Serpent: A Novel 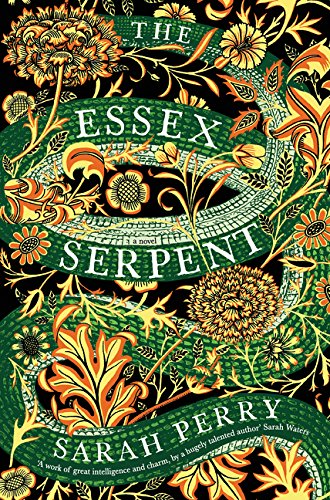 “The Essex Serpent is a masterpiece of a novel . . . Sarah Perry has written a multifaceted novel with universal appeal.”

Lush descriptive narrative, complex plotting, well-defined characters, and a setting both realistic and fantastical combine to create a stunning historical novel that explores the feminist identity, as well as the dichotomy of science versus faith. Sarah Perry has succeeded on many different levels with The Essex Serpent, British Book Awards Book of the year. At last, a prize-winning novel that is also compelling reading.

When Cora Seaborne’s respected and controlling husband dies, she follows the unwritten but well-understood Victorian conventions of widowhood: black bonnet with veil and black plumes; black dress whose neckline reveals the scar on her collarbone; and black fabric-covered buttons that don’t quite meet at the cuffs, as Cora’s grief doesn’t quite meet Society’s demands.

“The sensation was decently suppressed, but all the same she could name it: it was not happiness, precisely, nor even contentment, but relief. There was grief, too, that was certain, and she was grateful for it, since however loathed he’d been by the end, he’d formed her, at least in part—and what good ever came of self-loathing?”

Perry’s subtle way of conveying Cora’s husband’s abusive nature through the scar on Cora’s collarbone that just so happens to match the engraving on a silver candlestick is masterful understatement evokes the image of a domestic beast being branded.

Also very subtle is Cora’s realization that part of her personality is the result of her dead husband’s manipulation. “On her nineteenth birthday she exchanged birdsong for feathered fans, crickets in the long grass for a jacket dotted with beetles’ wings; she was bound by whalebone, pierced with ivory, pinned by the hair with tortoiseshell.”

But all that is past and Cora begins to revert to her previous form, a curious mind with a bent for scientific inquiry, and the determination to never let another person tell her how to think or what to do. When she hears of the reappearance of the Essex Serpent, a supposed sea monster that has haunted the Backwater, the marshes of Essex for more than three hundred years, Cora takes up residence on the Essex coast with her odd, obsessive 11-year-old son Francis, and Martha, his nanny and Cora’s loyal friend.

Cora’s friends, especially Dr. Luke Garrett, who is in love with Cora nearly as much as he is in love with the idea of performing surgery on the human heart, are unbelieving that a resident of London, a widow of a socially prominent man, can be happy in rural Essex.

Cora, while she sees the drawbacks of the Essex town of Colchester, enjoys her opportunity to be untidy, mud-splattered, and free of Society’s demands. “. . . removed from London’s gaze had abandoned her dutiful mourning and receded ten years to a merrier self.”

At the urging of her friends Cora becomes acquainted with a country vicar, William Ransome, who is the polar opposite of Cora, a man dependent on his religious faith who views the Essex Serpent as imaginary. “In the year past, with the coming of the Essex Serpent (which he took to calling “the Trouble,” reluctant to christen a rumor), claims on his time had grown steadily greater.”

The tiny parish of Aldwinter is certain the Essex Serpent is a judgement from God on its residents, which Will Ransome views with impatience. His growing impatience is increased with the coming of Cora, who believes the serpent is some as-yet-undiscovered sea creature, a surviving dinosaur.

As might be expected, Cora’s and Will’s opposing views on not only the serpent, but on religion and science, lead to heated debate. Unspoken and unadmitted is the growing love between the two, a love that must be suppressed as Will is not only married, but his wife Stella is dying of tuberculosis.

The secondary characters are so well developed that they might be considered major characters in a novel less well-plotted and well-written. Luke Garrett with his obsession on heart surgery, not approved during Victorian times; George Spenser, Garrett’s friend—in fact, his only friend—is in love with Martha, Francis’s nanny and Cora’s friend. Martha, on the other hand, is in love with socialism to the exclusion of human affection except for Cora.

The most interesting minor character is Francis, Cora’s son. With knowledge of mental disorders almost nonexistent, Francis is dismissed as an odd child, uncomfortable to be around with his obsessive counting and collecting of objects. Autism is an unrecognized condition in Victorian times, so Francis’s inability to experience appropriate emotional responses and his dislike of being physically touched are just other examples of his oddness. What surprises Cora and Martha is the affinity between Francis and Will’s wife, Stella. As Stella nears death she also becomes obsessive, collecting any object that is blue.

In one respect Francis’s inability to feel appropriate human emotion mirrors Cora’s and Will’s deliberate suppression of emotion, just as Martha’s love of a political agenda leads indirectly to the wounding and crippling of Luke Garrett. Marth’s love for the masses rather than her love for the individual, excepting for Cora, is akin to Francis’s detachment from emotion.

The Essex Serpent is a masterpiece of a novel that can be read on several different levels: a story of one woman’s determinism to be free of convention, a testimonial to feminism, a political statement, an exploration of one man’s faith and one woman’s denial of such faith. Sarah Perry has written a multifaceted novel with universal appeal.