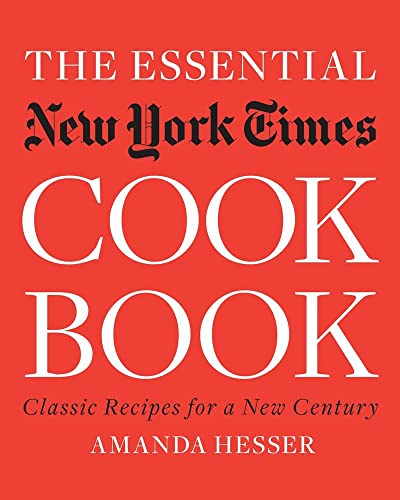 Here’s a book that is sure to show up on nearly every foodie’s holiday wish list this season.

It has been nearly 50 years since Craig Claiborne published the highly acclaimed The New York Times Cookbook, which is considered one of the best cookbooks of the 20th century. Now we are in a new century and the baton has finally been passed to Amanda Hesser, a food writer at the Times, who firmly makes the case in her introduction that this is “not . . . an update of Claiborne’s book.”

She’s right of course. The Essential New York Times Cookbook has nothing to do with Claiborne save for the occasional inclusion of one of his recipes. It is a remarkable work that happens to share the name The New York Times in its title, but that’s where the similarities end.

Whereas Claiborne’s book provided a snapshot of American cooking in late mid-century, Hesser has compiled an impressive collection of selected Times recipes spanning 150 years. It isn’t a “comprehensive collection of recipes or a thoroughgoing history of American cooking,” she writes. Rather, it is “an eclectic panorama of both high-falutin’ masterpieces and low-brow grub, a fever chart of culinary passions.”

A comprehensive collection it may not be, but no one who delves into this book will walk away without a great deal of admiration for Amanda Hesser and her assistant, Merrill Stubbs, for the prodigious amount of research and recipe testing that went into this book. The final cut of over 1,100 recipes were tested and chosen from 6,000 reader recommendations as well as the archives of The New York Times—going all the way back to 1850.

As eclectic as this collection is, Hesser has managed to make sense of it all. Let’s face it, with recipes spanning 150 years and contributions from a highly diverse readership and writing staff, this book could have been a jumbled, chaotic mess. It is not—it is entertaining, understandable, and can be used in many different ways.

For those who want to trace the arc of American food tastes, Hesser offers several fascinating timelines. An overarching timeline of trends in food preparation and preferences is presented in her introduction, but more refined timelines head up each chapter accompanied by Hesser’s informative commentary. So, for example, if you were to look at the timeline at the beginning of the chapter on salads, you would find that Caesar Salad made its debut in the 1940s and that Alice Waters introduced the now ubiquitous Baked Goat Cheese with Salad in 1983.

To make sense of each chapter, the introduction is followed by a handy recipe index that is organized by category (hot, cold, first course, second course, fall, winter, etc.) The recipes are then presented in chronological order so that you can see food trends for yourself.

You might want to use this cookbook as a reference for conjuring up theme parties. Let’s say you were hosting a 25th anniversary party for a couple that was married in 1985. Starting with main courses from the 1980s you might decide on Osso Buco alla Milanese (from 1985) and then find that you could offer Sophie Gregson’s Parmesan Cake (1989) with before dinner drinks, followed by Sicilian Mushroom Soup (1985) as a starter and ending the meal with Balducci’s Tiramisu (1985). (Apparently, Italian food was big in the 1980s.)

But what really makes this cookbook succeed is that Amanda Hesser, ever conscious that readers might not know what to do with all this information, provides pairing suggestions at the end of each recipe. Looking at the recipe for James Beard’s Chicken with 40 Cloves of Garlic (p. 469), for example, Hesser offers the following serving suggestions to pair with it: Crostini with Eggplant and Pine Nut Puree (p. 78), Asparagus Salad (p. 214), Puree of Peas and Watercress (p. 296), Polish Jewish Plum Cake (p. 769), Tartlettes aux Pommes Lionel Poilâne (p. 834), Tourtière (p.827), Raspberry Bavarian Cream (p. 807).

Imagine how easy it will be to plan your next dinner party. Which brings us to an important point: with few exceptions, this is not a go-to cookbook for weeknight dinners. Many of the main course selections require time and advance planning to shop for all the ingredients. Nor is this a cookbook for beginners. For the more experienced cook, however, there is enough here to keep you happily cooking for years without ever repeating a menu.

For fans of The New York Times food pages, 50 years is a long time to wait for the next cookbook, but The Essential New York Times Cookbook proves that some things are worth waiting for. It is a fascinating look at American food trends, a wonderful walk down memory lane, and a great cookbook—all rolled into one.