Essential Essays: Culture, Politics, and the Art of Poetry 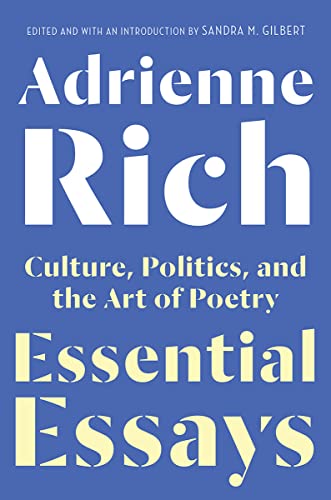 “this collection refreshes an esteemed opinion of Rich’s invaluable contributions to poetry and feminist thought.”

Widely known as a poet, Adrienne Rich is much more than that: feminist, activist, lesbian, mother, essayist, critic, teacher. A capture of all these diverse roles is achieved within the recently published collection Essential Essays: Culture, Politics, and the Art of Poetry.

Throughout these prose selections—which span over five decades of writing—Rich remains unyielding in her feminist views and her belief in poetry’s power. Despite the abbreviated and edited prose selections, Essential Essays offers the core of Rich’s writing in a condensed version that will appeal to Rich’s novice readers or to those only familiar with her poetry.

Compulsive heterosexuality becomes a thread throughout much of the writing but, obviously, dominates her 1980 essay “Compulsory Heterosexuality and Lesbian Existence” where Rich defines the term as a “political institution which disempowers women.” Because heterosexuality becomes the “presumed” sexual preference of “most women,” she writes, a failure exists to recognize “women’s choice of women as passionate comrades, life partners, co-workers, lovers.” Rich concludes that heterosexual culture thwarts a female and/or lesbian existence and that a “feminine critique” of heterosexuality “is long overdue.”

Motherhood is another institution Rich rails against as being under “male control.” The male view drives a definition of female in terms of reproduction and children, she argues. In excerpts from her first prose publication Of Woman Born: Motherhood as Experience and Institution and in her most personally revealing moments, Rich visits the (psychological) break with husband and calls the raising of her three children as times of “anger,” adding that children defrauded her “of living for even fifteen minutes” as herself. She posits poetry as seeming “more real” to her, where in contrast, motherhood was “acting the part of a feminine creature” and assuming the role of “adult womanhood to the full.”

Not simply arguing for a middle space which male/female ostracizes, Rich wants to dismantle the structure itself by removing the orb of the male from any conception of female and instead asserting the female as whole, unrealized, and independent. She registers this principle in additional essays such as “Split at the Root,” where Rich works over the strains of her Jewish identity in a Christian/Jewish complex, and “Blood, Bread, and Poetry” which explores poetry making, female consciousness, and economics against the male order.

A true delight comes in reading Rich’s criticism of works like Jane Eyre and the poetry of Emily Dickinson. Criticism excels when the critic shakes off the cobwebs of familiar works and allows them to glisten in a different slant of light, and Rich’s insights expertly achieve this. In “Jane Eyre,” she reads Charlotte Bronte’s novel as a work expressing “economic independence” and “free choice,” views that echo the tenets of “economic dependence” from early feminist writer Charlotte Perkins Gilman. Rich explores Dickinson’s poetry as a psychic exploration of “female consciousness” and provides a rich, close reading of Dickinson’s work.

Other essays express Rich’s deep commitment to poetry and its invaluable place in her life and the world. “Poetry in the Forgotten Future” argues poetry’s placement “into the middle of life” where it “talks back” and acts as “part of the world, not simply a mirror of it.” Rich aphorizes: “Without poetry, our world is unintelligible.”

Her commitment to art is found in her letter to the National Endowment for the Arts where she refused the medal in 1997, citing the “interests of corporate power” and a government that fails in “encouraging artists” as reasons. This theme carries into “Arts of the Possible” where Rich views even language as being corrupted by capitalism and the rise of American wealth.

As with any compressed collection, some omissions are questionable. Most notably here is the lack of Rich’s 1984 speech “Towards a Politics of Location” where she establishes the concept of female “locatedness” in her ongoing feminist theory. It is an important document in Rich’s oeuvre and offers additional richness to her exploration of female and the body, and is missed.

Ultimately, for the reader naïve to Rich’s criticism and feminist/lesbian theory, Essential Essays offers an ideal entry point. For the fan and long-time admirer, this collection refreshes an esteemed opinion of Rich’s invaluable contributions to poetry and feminist thought. While the collection fails to capture the whole of Rich’s complexity, it does offer an excellent entry point and a consolidated view of her work. From Essential Essays rises a portrait of a deep thinker, a political activist, a shrewd critic, and, necessarily, a sharp poet.