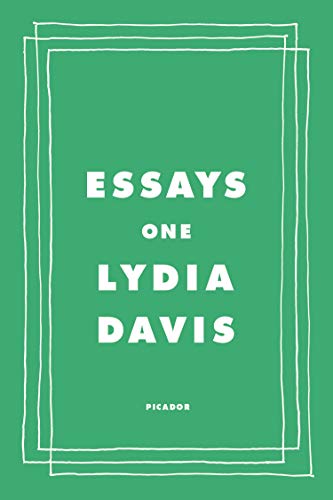 “The best part of Essays One are the many poets and authors Davis considers influences, these will be useful for Davis’ admirers to pull out from Essays One and dig in to on their own.”

Essays One is a collection of Lydia Davis’ previously published essays, and most are on the craft of writing.

Essays One is the first of a two-volume collection of Lydia Davis’ nonfiction. Davis categorizes Essays One’s contents as, “Essays, commentaries, reviews, prefaces, observations, analyses, and a few talks.” The chapters as topics are for the most part, essays on writing and essays on visual arts and artists, and essays on writing predominate.

Davis is known as a “writer’s writer” that is, a writer who other writers turn to when they are looking for inspiration. For readers who are unfamiliar with Davis, she is best known for her fiction, which is uncategorizable short stories, fables, parables, and fragments.

This is not that.

Davis’ describes her writing process as personal and introspective and begins her first essay with examples from her early writing. She next compares these early passages against paragraphs from more “established” writers, pointing out different styles of repetition and comma placement.

Davis describes her evolution as a writer, when she became more experimental, writing became less work and more fun. Davis clarifies this by explaining experimental is planned, while unplanned is not experimental.

Davis’ goal is to tell stories but also be non-traditional in handling language, like Samuel Beckett, and also intends to craft emotionally “well-crafted fragments” that have “richness of character,” similar to parables and paradoxes that have been written by Kafka, Jorge Luis Borges, Robert Walser, and Peter Altenberg.

Davis’ influences are many, including Isaac Babel, and Grace Paley, Jane Bowles, Osama Alomar, Roger Lewinter, and the dialogue of Denis Johnson. Davis doesn’t list her influences out in one essay, but essay by essay, name-by-name, adding to an expanding list of influences. Her additions don’t repeat across essays, as they are also tied to a particular theme or style explored in each essay, with an explanation of why each writer is valued, and often includes a sample of their writing. Davis admits she is “impulsive with examples.”

Davis’ writing process includes taking real people and real events, and then inventing stories out of whole cloth. She explains, “One of the returning points on my development as a writer as the realization that I could, with great satisfaction, write fictional stories that were accounts of actual events, only thinly disguised.” As an example of this process, Davis provides a fragment of a story and then explains how it was different from what really happened, and why. This style, in an essay, comes across in a put tab A into slot B kind of dryness, with an emphasis of elucidation over entertainment.

Many of the essays in Essays One are dry instruction. In an essay describing the thought processes that went into a story under one hundred words, Davis provides two versions explaining the difference in style leads to a difference in tone. Another essay is a study of story structure that considers whether a short story should be constructed as one long paragraph or as three shorter paragraphs, and what version each tells us about the narrator versus was is intended to be told in the story.

After presenting a (very) short story by Thomas Bernhard in full, she follows with an analysis and interpretation, having also numbered each sentence, she points out the particular effect she finds of interest in each sentence. Davis also lists poets that have influenced her, among them: Anso Hollo, Samuel Menashe, Lorine Niedecker, and Anne Carson’s verse novel, Autobiography of Red. Davis also analyzes poems. After quoting in full one brief poem, “Red Mittens,” from Translation from the Cheremiss, by Anselm Hollo, Davis produces three pages of analysis. For a poem by Rae Armentrout, Davis analyzes every word for choice, placement, and meaning.

Davis tells us where she finds material for use, not just real people and real events but also from real-life as if real-life were experienced as dreams, as well as from dreams, and also from various bits of subject matter such as bureaucratic forms, email, and from the quirks of someone who has learned English as a second language. She enjoys “a different way of seeing a commonplace thing,” with the goal of writing short pieces “with the power to move, or at least startle or distract.”

Ideas for stories for Davis can also come from things that remind her of other things. Ideas have come from other writers and poets, and ideas that have stayed with her over time. Davis recommends mining excerpts from trial transcripts, local paper’s obituary notices that can be kept as-is as “found” art, and what she calls the “oft-repeated ordinary.” Davis provides examples of forms used as writing experiments, including a grammar lesson, a French lesson, and a letter protesting a parking ticket. Not all experiments work, she says, but she values the freedom to try and fail.

Davis considers fragments by themselves to be a worthy form of writing, and muses that everything, even lengthy but incomplete works can be considered fragments. She explains how to interpret fragments and how to interpret what an author means by using “etc.” She provides examples of fragments along with suggestions on how to make a fragment work as a piece of writing.

In the same essay, Davis explores different writers who have written fragments, and those who have different definitions of what a fragment is. She digresses to present Roland Barthe’s “take” on writing, and then other authors’ takes on writing, and digresses again, and again, and the essay mutates from the topic of fragments to a riff on writers on the art of writing.

In her next essay, Davis provides recommendations for good writing habits with examples; it is interesting to note that after the reader has been cued to recognize fragments, Davis examples have become fragments-as-stories, which right after her essay on fragments might be accidental, or might a very clever ordering of essays.

Writers who have held fascination for Davis are those who use artificial constraint, for example, writing a story without using the letter “e.” George Perec did this in French, and this was translated, also e-less, into English by Gilbert Adair. Perec and Adair are only mentioned by Davis in passing, but there are writers whom Davis admires extended into essay length, for example, Thomas Pynchon and Lucia Berlin. For Pynchon, Davis studies Pynchon’s early writing looking for signs of promise which, to no surprise, she finds. For Berlin, it’s not just Berlin’s books that interest Davis, but also Berlin herself who Davis studies from her personal letters.

Davis recommends that writers keep a notebook. Davis notes that keeping a writer’s notebook is different from keeping a diary, which Davis also recommends, though she admits she does not keep one herself. Davis informs us that her notebook contains short entries in the style of Felix Feneon. Feneon wrote three-line police reports he called “three-line novels,” for newspapers. Davis recommends the English translation of Feneon by Luc Sante.

To no surprise, Davis is also a fan of writer’s autobiographies, especially if the author is eccentric. Davis admires the autobiographies of Kafka, Cyril Connolly, J. R. Ackerley, Gertrude Stein, Theresa Hak Kyung Cha, and Michel Leiris. And Davis gives special notice to Stendhal’s unfinished The Life of Henry Brulard for his use of time.

Davis has such a fascination of the thought processes of other writers, she goes through their diaries and personal letters for insight and inspiration. Davis recommends to readers the diaries of Kafka, Pascal, and Josep Pla.

At this point, the reader might imagine Davis would read anyone’s diary, even the not-so-famous, whether invited or not, whether living or dead, for inspiration, for fragments and for use as found art. Not only would Davis read anyone’s diary; she admits to, and encourages listening in to strangers’ conversations. She lists the best places to best eavesdrop, for example, outside restrooms at an airport, and in the waiting rooms of doctor and dentist offices.

Davis offers a curious essay on novelist Edward Dahlberg. She begins in a roundabout manner, starting with writers dishing on the publishing industry and dishing on other writers. She then cuts away to how awful Dahlberg was as a person, after relaying the dedication “For my friend, Jonathan Williams” in Dahlberg’s book Bottom Dogs, she notes, “So he had, at that time, at least one friend.” She next describes Dahlberg’s work as “A literature expressing physical repulsion.” The curiosity of the essay comes from this: although Davis has consistently provided samples of favored author’s writings, she offers no such samples from Dahlberg. For context, Edward Dahlberg has been compared to Louis-Fernand Celine in both creating a new style—that is, he was recognized as a good writer, while also being recognized as overtly racist, misogynist, and an all-around despicable person.

As for essays on the visual arts, Davis first writes on the abstract, expressionist Joan (not Joni) Mitchel, an American artist known for French landscapes. Davis first saw Mitchel’s art as a young child in France in the village of Vetheuil, and Davis’ essay presents a child’s first impressions of abstract art.

Davis also offers an essay-as-visual-art on Joseph Cornell, known for filling display cases with random artifacts. Davis’ essay was written as if Cornell’s visual art was reimagined as poetry. Cornell’s art provokes a feeling of wonder and mystery. As a counterpoint, Davis places objects-as-word in stream-of-conscious grouping of adjectives and nouns, marking every poetic ‘break’ as if it were an individual. Each clause is filled with the names of things, product brands, rituals, test instructions, and prayers. Davis’ essay-as-visual-art too, is a wonder and a mystery, is abstract but emotionally moving, and as such Davis’ most powerful work of fiction in this nonfiction collection.

In another visual-arts essay, “Dutch Scenes: A portfolio of early twentieth century photographs,” Davis explores photographs taken by tourists as curated found art. Here, Davis acts as tour-guide/sociologist and comments for the reader on her impression of early 1900s photographs as a window into Dutch culture. The images show persons in period clothing (bonnets, cloth caps, lace embroidery, woolen pants), and in their regular work routine (farming, fish mongering). The essay came about says Davis, through trying her hand at translating Dutch texts, and one thing simply led to another. Davis shares her wry irony, typically reserved for fiction, where under the photo of a young woman fish peddler, she writes, “Notice her short sleeves, displaying her strong arms, . . . traditionally an attractive attribute.”

There’s too much here to fully review. Overall Essays One, is very intelligent but dry; more instructional than inspirational. There may be a few frissons of bright imagination that escaped from Davis’ fiction into this collection, but not many, and for the reader, not enough. This reviewer holds to the firm conviction that imagination is like fairy dust. Remove the fairy, and what remains is dust.

The best part of Essays One are the many poets and authors Davis considers influences, these will be useful for Davis’ admirers to pull out from Essays One and dig in to on their own.