Escape from Paris: A True Story of Love and Resistance in Wartime France 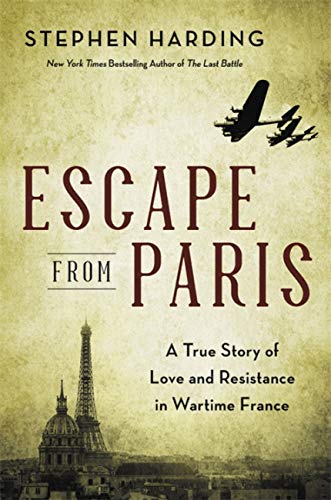 “With clear prose and an excellent writing style, Stephen Harding, editor of Military History magazine, is to be commended for bringing another interesting story of World War II to the public’s attention.”

The historiography of the nonfiction genre, in recent years, has been emphasizing and concentrating on the human-interest side of a story. While writing monographs on military history still certainly has its place, author Stephen Harding has been in the forefront, in some of his previous books, in his efforts to find and write about the personal side of many events and incidents that would otherwise escape notice and could be lost.

Although there are many accounts to be found regarding the escape and evasion from capture of Allied aviators and other myriad forms of French resistance to German occupation, this is an account that includes the perennial favorite: A love story. Of course, there is no reason here to reveal the result of that relationship.

In any event, Harding has told this story from multiple perspectives. He covers the life and wartime service of the protagonist, the lives of the French family that sheltered him, and other aviators, literally right under the noses of the Germans, and even includes the efforts of the German pilot whose tactics were instrumental in the destruction of many American bombers early on in the 8th Air Force’s campaign against targets mostly in France and Germany.

As it was, the Germans had at least somewhat of an upper hand in the early days (1942–1943) of the bombing offensive as the Americans were still attempting to devise their own tactics to counter the Luftwaffe’s interception of their bombers and still complete their missions against strategic targets.

Not surprisingly, it was a trial and error, on-the-job training situation that didn’t always go the way it was planned. The B-17 bomber of the young waist gunner, Joe Cornwall, around whom this story revolves, was technically brought down in a collision with a German fighter that had been shot down by another nearby B-17.

Lucky to escape his aircraft, he was eventually brought straight into Paris by members of the Resistance and sheltered by a French family that was responsible for the maintenance of and other duties in the historic Hotel des Invalides which, among other things, houses the tomb of Napoleon Bonaparte, other famous national figures, and many art objects and artifacts.

With the Germans having requisitioned much of the complex for themselves, Cornwall and other evaders were sometimes quite literally rubbing elbows with the enemy. During the course of his stay, Cornwall and the family’s daughter, Yvette, developed romantic feelings for each other and made plans to share a future together after the war.

Circumstances being what they were, security was foremost for everyone concerned, with the French most at risk of betrayal, never quite certain who could be trusted, was a collaborationist, or might have been turned by the Germans. In the event, after Cornwall’s so-called “home run,” returning to England and Allied control, the French family, with many others in various Resistance networks, was arrested by the Gestapo in 1944 and sent to different concentration camps.

Besides the family’s incarceration, complicating the romantic situation was the fact that Cornwall was sent home to the United States because, as a successful evader, he could have potentially compromised resistance networks had he been shot down again and then captured.

While the mother and daughter survived the war, the father was not so fortunate, having died in camp and his body cremated. Needless to say, the doubt and uncertainty surrounding his demise further complicated future possibilities for the two lovers.

Postwar, all were honored by their respective government and nation for their efforts and sacrifices, including the United States Presidential Medal of Freedom for the Morins, the French family, which had taken so many risks as part of the Resistance.

Although there are no maps included, there is a photographic section that includes several of the main characters posing in occupied Paris along with other relevant personages and places. An appendix, After the War, provides information on the lives and postwar fortunes of Cornwall’s friends, fellow survivors of the raid, including “home run” hitters, who figured as much in this story as he did.

With clear prose and an excellent writing style, Stephen Harding, editor of Military History magazine, is to be commended for bringing another interesting story of World War II to the public’s attention.