The Envoy: The Epic Rescue of the Last Jews of Europe in the Desperate Closing Months of World War II 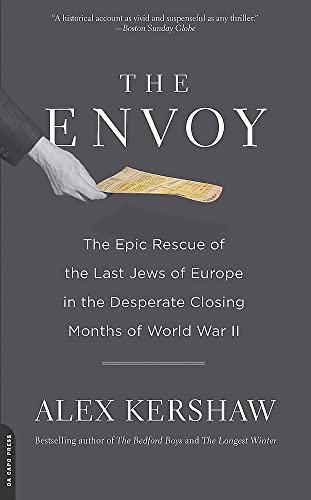 The Envoy is Alex Kershaw’s testimonial to Raul Wallenberg and his campaign to save the Jews of Hungary from extermination by Nazi Germany in 1944.

Bestselling author Kershaw dramatically pulls the reader into the diabolical campaign of Adolf Eichmann to send more than 250,000 Hungarian Jews to Auschwitz. With the nail-biting suspense of a winning novelist, Kershaw uses solid research and anecdotal data to show how it felt to be just one step ahead of the SS and their cruel Hungarian proxies, the Arrow Cross.

Based on the latest information from survivors, international archives, personal interviews, and multiple records, The Envoy is a brilliant examination of the rescue of Hungarian Jews near the end of the Holocaust, led by the brave Swiss diplomat, Raul Wallenberg. Kershaw gives the reader a fiery collection of facts as explained in detail by survivors and records, woven into a thrilling and detailed account of Wallenberg’s courageous efforts to save thousands Jewish families from certain death.

Kershaw’s meticulous research opens a comprehensive analysis of Adolph Eichmann and his desperate need to fulfill Hitler’s command to make Europe Judenrien. We learn that the chain-smoking Nazi leader was compelled to do anything that would endear himself to The Fuehrer. In this case, it was the destruction of the Jews of Hungary. Kershaw describes how Eichmann poured himself into the task with gusto.

By 1944, most of the Jews of Europe had already been shot and buried or gassed to death in Nazi death camps. Only the Jewish families of Hungary remained alive. Eichmann’s job was to send them as quickly as possible to Auschwitz, for Special Treatment. In April and May, Eichmann increased the evacuation of Hungarian Jews to Auschwitz to an estimated rate of 12,000 per day. When trains and trucks had been commandeered to the front lines, Eichmann forced innocent Jewish men, women and children onto a terrifying death march. Kershaw deftly employs interviews and recorded data, bringing to life some of the most tormenting and frightening moments of this march.

At that time, the world had begun to discover the vast persecution and genocide of European Jews by Nazi Germany. Upon learning that the Jews of Hungary were about to be exterminated, President Roosevelt ordered diplomat Iver Olson to Stockholm, to intervene. Because Sweden was officially neutral in WWII, only their diplomats could go to Hungary to provide protection for Jews.

Olson named a tall, 32-year-old Swedish diplomat named Raul Wallenberg for the position. The affluent Wallenberg, whose academic credentials came from The University of Michigan, was fluent in German, Hungarian and Russian. His mission was to save as many of Hungary’s Jews as possible by providing them with Swedish protection papers, called a “Shutzpass.” He also financed the purchase of 32 safe houses, protected as Swedish property. He put up signs such as “The Swedish Library” and “The Swedish Research Institute” on their doors and hung oversize Swedish flags on the front of the buildings to bolster the deception. Into these safe houses poured the lifeblood of Hungarian Jewish families. Most Jews caught outside of a safe house were sent to the gas chambers at Auschwitz. Others were shot by the Hungarian Arrow Cross, their bodies dumped into the Danube.

Together with Swedish diplomat Per Anger, Wallenberg distributed thousands of protective passports and bribed hundreds Hungarian officials. In doing so, at the danger of his own life, Wallenberg defied Eichmann and the brutal Hungarian Arrow Cross. Tens of thousands of Shutzpass papers were created; the lucky recipients were boarded in Wallenberg’s Budapest safe houses. There was little food, heat or water. Most buildings had been deprived of electricity through massive Allied bombings. Survivors hid in scorching attics, froze in damp, cramped basements and at every moment faced arrest and deportation to Auschwitz, or summary execution. Parents watched in horror as their children caught outside a safe house were shot. But thousands of Wallenberg Jews remained alive through his courage and determination.

Two days before the Russian Army occupied Budapest, Wallenberg negotiated with Eichmann to cancel a final effort to organize a death march of the remaining Jews in Budapest by threatening to have him prosecuted for war crimes once the war was over. Then, as Budapest was liberated by Russia, Wallenberg traveled to meet with the leading Russian general, in order to negotiate fair treatment of his Jews. Wallenberg was arrested by Russian authorities and sent to Moscow. He then disappeared completely.

If there is a portion of The Envoy that leaves the reader disappointed it is the lack of data about Wallenberg after he was detained by Russia. Could Kershaw have dug a little deeper? Perhaps this will be the subject of a future work. The photographs at the end of the book enhance the depth of the story. Yet we are left to wonder what really happened to this wonderful, courageous man after his arrest by Soviet Russia.

As many as 100,000 Wallenberg Jews survived and perhaps one million of their progeny are alive today because of his resolve and courage. Kershaw’s brilliant effort is one that should be read by everyone who values freedom, tolerance and liberty. Named a “Righteous Person” by Israel, generations will live on because of Wallenberg’s courage. Alex Kershaw has delivered a masterpiece about Raul Wallenberg, as witnessed from every perspective.