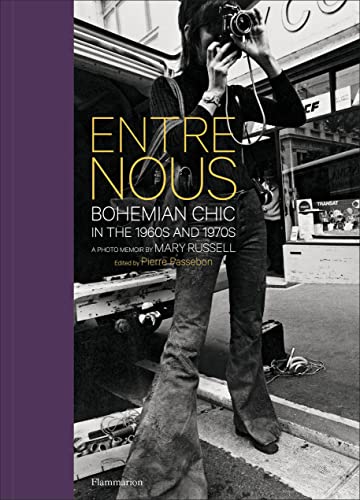 Enter Mary Russell with her book Entre Nous: Bohemian Chic in the 1960s and 1970s which is a book written in the first person because she was there, she was part of it and she was a willing participant in all the antics of those years as well as enmeshed in the fashion  business of the era.

This reviewer was suddenly reminded after finishing this delightful memoir of these lyrics by Dobie Gray:

Any time of the year, don't you hear?
Dressin' fine, makin' time
We breeze up and down the street
We get respect from the people we meet
They make way day or night
They know the in crowd is out of sight.

And, so it was for Mary Russell and her enviable life which is recounted in photos as well as with her almost conversational text which engages the reader to the point of feeling that you might be reading from her personal diary from those times.

The dedicated fashionphile of a certain age will revel in seeing and being reminded of what life was like when all was carefree and when the business of fashion was as much fun to work in as it was after hours. Do not confuse this wonderfully and joyfully written remembrance of times gone by with the books such as Loulou and Yves: The Untold Story of Loulou de La Falaise and the House of Saint Laurent, which was riddled with idle gossip and second-hand innuendo. Keep in mind that many of the “players” may be the same but that this telling is written by someone who lived it and not envied it as a spectator.

The takeaway here is simply that depending on the reader’s breadth of knowledge about those decades in the fashion business or their curiosity about the wild and wonderful ’60s and ’70s will determine the level of enjoyment that will be reaped from the reading Entre Nous. As for this reviewer, it was a trip down memory lane, insightful and somewhat melancholy to be reminded of what once was one of the most glamorous times of international fashion.