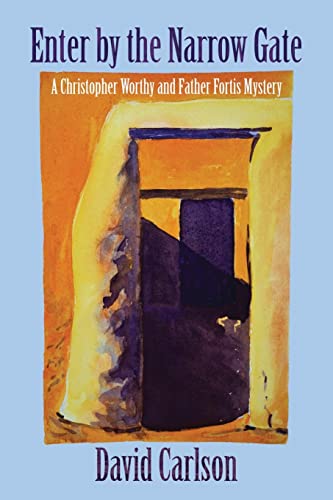 A Detroit police lieutenant comes to New Mexico seeking a runaway girl.  An Orthodox priest accepts an invitation to stay at a Trappist monastery where a nun living with the monks was recently murdered. These two individuals are good friends and before long, both are drawn into a mystery that eventually reveals a startling and unexpected common demoninator.

Father Nicholas Fortis is noted for his outspokenness and his curiosity. When he learns of Sister Anna’s death, he wangles an invitation from the abbot to have Lieutenant Christopher Worthy stay at St. Mary of the Snows during his time in the city and to quietly investigate the murder.

Soon both men find themselves discovering more than a mere murder investigation as they learn that Ellie VanBruskman may not have simply run away as her parents state. She may be bipolar or she may not. She could be off her meds or possibly still taking them. Out of the contradictions Christopher learns about the girl he’s hunting, one fact remains constant: She’s trying to help Victor Martinez, a college friend she thinks is in trouble.

Delving into the relationship between Ellie and Victor opens up what can only be described as an even more complicated can of worms. In doing so, Christopher uncovers discrepancies in Ellie’s background, and mysteries in Victor’s. His liaison within the Santa Fe police department is ready and willing to assist while being disdainful of his ignorance of New Mexico and the customs of its Native Americans.

The lieutenant has a lot to learn about the country and its people, and in doing do, he gains much-needed knowledge that will further his case.

When Worthy’s investigations leads to a group called Los Penitentes, a near-secret lay society practicing self-flagellation and a re-enactment of Christ’s crucifixion, both the Native American population as well as the monks of St. Mary’s begin closing ranks.  What secret are they hiding? Who are they protecting…and what does a suppressed religious cult have to do with a murdered nun and two teenagers struggling to find themselves?

Father Fortis and Lieutenant Worthy soon find that the Narrow Gate of the title may lead to heaven but it may also lead to death . . . for several characters in this novel, as well as the two investigators themselves. . . .

The cultures of New Mexico and its Native American population are explored in depth, offering many insights into the region and its inhabitants while providing a background for this intriguing mystery. This is a well-written novel, but the divergent paths aren’t as easy to follow. When the reader thinks he’s solved the puzzle, he’ll find himself on a different trail.  What starts out as a hunt for a missing daughter soon becomes a search for a killer, as the murder of Sister Anna and the disappearance of Ellie VanBruskman take on a deeper, more sinister, and horrible meaning.

Enter by the Narrow Gate is the first novel in the Christopher Worthy-Father Fortis mystery series, and it gets these two characters off to a chilling but entertaining start.