The English Major: A Novel 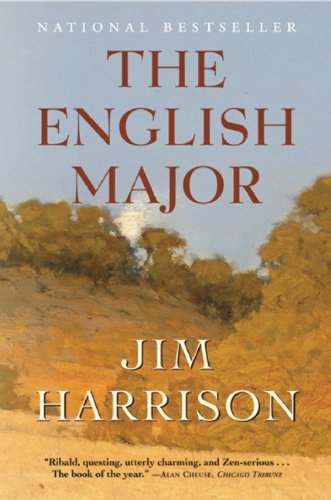 Cliff, a former Michigan English teacher turned farmer finds himself in a midlife crisis when his wife suddenly leaves home for another man. Also grieving the loss of his old dog, Lola, Cliff goes on a road trip planned capriciously by the pieces of a jigsaw puzzle of the states of America. On the road he takes a quirky former student, Marybelle, as a lover, seeks the counsel of a half-crazed doctor friend, and tastes the worldly part of California visiting his gay son, a prominent producer, in San Francisco.

Cliff is one of author Jim Harrison’s most notable characters, and he is perfectly drawn.

A second coming-of-age finds Cliff seeking; he is an honest man, cerebral but rustic, tough but sensitive. The reader is drawn into Cliff’s ruminations on the journey as Harrison has the talent to seduce readers to his characters’ points of view.

The life force runs strong in spite of Cliff’s age and difficult situation. Sex with Marybelle is ribald and kinky, especially since Marybelle is totally unpredictable and most often very duplicit. Vivian, Cliff’s selfish and materialistic ex, complicates Cliff’s life, even on the road.

Mr. Harrison’s talents shine in The English Major. Always in control, he renders the classic roadie plot fresh (following the puzzle). His prose seems a perfect example of “simple is better.” He eschews big words for small, and he captures the dialect of the American heartland exactly. Careful word choice clarifies Cliff’s musings on life. Such a feat results in dialogue that is not only readable, but also totally believable. Readers will find it hard to believe that Cliff and other characters in the book are fictitious.

As like most of Harrison’s other books, autobiographical threads run throughout the novel, e.g. Harrison was an English major in college. His passion for food—usually of the earth—for game, and for gatherings is there. He understands umami. His love and respect for animals are also there, too. Cliff reminisces frequently about his old dog, Lola, and he stops in many country fields on his journey to meander through herds of Black Angus or to visit single cow for a while.

Cliff, cerebral as he is, also reacts to what he sees and what he experiences on a gut level. He is protective of the environment, hurt by the masquerade and duplicity he finds. He is hugely respectful of the land, of sexual orientations, and particularly of human tragedies like the treatment of Native Americans.

Fans of Jim Harrison’s work will not be disappointed in this darkly comic novel; instead they will find comforting wisdom in the thoughts of an active mind and big heart of a 60-year-old man with a philosophic bent.

Cliff is the senior version of Harrison’s early heroes, like Warlock, or even David Burkett (Straight North, 2004). Readers are apt to read slowly, savoring rich passages that explain the protagonist’s take on life, whether on the specifics of politics, media, economy, and such, or on grander things like love or the order of the universe.

The English Major belongs on the library shelf along with Thoreau, Whitman, and Twain.