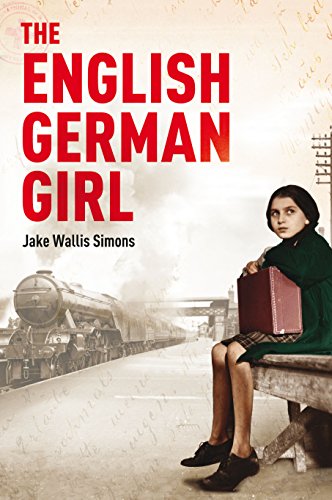 “An inspiring story of courage and love.”

The English German Girl is a fictional representation of the Holocaust with considerable emphasis on the Kindertransport program.

Prior to Nazi Germany enforcing the Nuremberg Laws against Jews, the Klein family is happy, productive, and loving. Fourteen-year-old Rosa, the protagonist, has an older brother and a younger sister. Otto, her father is a skilled surgeon. Her mother Inga is loving and supportive. Her brother Heinrich is bright and gregarious, often involved with his Zionist friends. Hedi her sister is young and innocent. They have a daily housekeeper, plenty of money, and many friends.

This idyllic life comes to an end with Nazi persecution. As Jews, the family is forced to move into an undesirable neighborhood. Otto can no longer practice medicine or work in a hospital. Inga is forced to do other people’s laundry to make ends meet.

Now comes Kristallnacht. Rosa’s father and brother are arrested, starved, and beaten. Her mother and Hedi spend the night at a railway station pretending to be travelers. Rosa is protected by their former housekeeper, but only for a few hours; meanwhile their home is ransacked.

With each passing month, Jews are forced deeper into squalid ghettos. They have very little to eat. Travel outside of the mandated ghetto is forbidden. Synagogues are burned. Jews are beaten on the street. And each day brings new threats of deportation “to the East,” which increasingly means terrible things. In almost all cases, the surviving families of those sent east never again hear from their loved ones.

Otto rejects the idea of leaving Germany for years. Like so many others, he insists that this persecution against Jews will swiftly pass and they will soon resume their old lives. By the time he realizes that Nazis intend to eradicate all Jews, it is too late to obtain emigration visas. Since Jews are stripped of their passports and have no visas, they are stuck in a Germany planning their extermination. This becomes more frighteningly tangible with each passing day.

Otto comes home one day with news that one of their children can obtain passage to England as part of a program called Kindertransport. As long as a family in England will vouch to care for a child, Kindertransport will allow passage. But only one child per family may leave. It is assumed that Hedi, the youngest, will go. But the Kleins change their mind and send Rosa instead. She will live with distant relatives in London. Then when it is safe they will send for Hedi. They assume that eventually the entire family will be reunited in England.

Rosa arrives in London and does her best to adapt to a new life in a new country living with strangers. She corresponds by letter with her family in Germany. But as the months and years pass, letters from her family stop arriving. Rosa’s letters are returned, undeliverable.

The balance of the novel involves Rosa’s new family and her new life in England. Her foster parents have a son about Rosa’s age named Samuel. Not long after Rosa arrives, Samuel goes off to war. He is injured and returns home to recuperate.

During this time, Samuel and Rosa fall in love, and soon Rosa is pregnant. Samuel’s parents will not allow it, and Rosa leaves. She is suddenly all alone in London dreaming of one day becoming a nurse. She believes that Samuel does not love her and she tries to move on with her life. But she misunderstands Samuel and his powerful love for her. Horribly frightened and with no one to help her, Rosa is once more on her own in a strange land.

The English German Girl is an inspiring story of courage and love. The characters are well developed and the novel well paced. Fear is the traction of this story and Simons wields it at a considerable stride. The author uses excellent guided imagery, placing the reader in the midst of the horror of Kristallnacht and the blitz in London. On the other hand, the reader does not quite adequately feel the physical attraction between Rosa and Samuel thus not engaging the reader emotionally.

There is a long gap between the time when Rosa stops hearing from her family in Germany and the time she understands why. And while this is exactly what happened to Kindertransport children who were old enough to recall their family left behind, the reader is left guessing about their loved ones’ fortune or demise. This represents a lost opportunity in the plot even if this decision was made for us only to see the Holocaust through the eyes of Rosa.

Rosa’s life in England expands significantly in two directions: the emotional loss of Samuel and her desire to become self-sufficient. Rosa does her best to become a nurse, following in the footsteps of her physician father.

The English German Girl is a grand mixture of excellent description, memorable characters, and plausible dialogue. The reader experiences the fears and desires of characters existing in a time of great crisis and desperate physical danger.