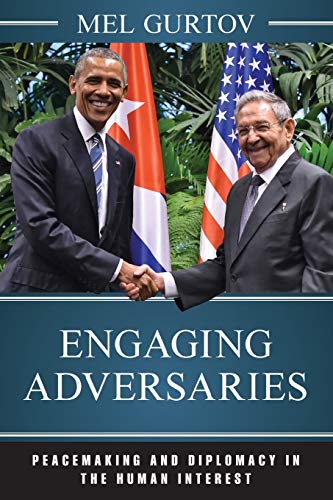 This handbook for peace makers distils and sums up a lifetime of analyzing international relations. A sinologist retired from research at the RAND Corporation and decades of college teaching, Gurtov lays out the obstacles to conflict resolution and outlines the most promising avenues toward conflict management between the United States and its adversaries—China, Cuba, Iran, North Korea, and Russia.

He applies lessons learned from those cases to the persistent problems between Japan, China, and Korea and those between Israel and the Palestinians. In each instance Gurtov focuses on what he regards as the human interest—not the national or ideological interest of each actor.

Though Gurtov is an idealist, he is not a naïve utopian—hence his goal of managing conflicts rather than resolving them. Though he looks for ways the U.S. could engage with North Korea and Russia, he is fully cognizant of problems dealing with a regime that maintains an extensive gulag and another that has invaded its neighbors and absconded with some of their territory. Based on wide reading and deep reflection, Gurtov’s analyses are balanced and comprehensive.

The book will be valuable to sophisticated policymakers as well as college students and concerned citizens. The author’s broad knowledge permits him to put recent events in historical perspective. Thus, he compares Hillary Clinton’s advice to Barack Obama not to be too eager for a deal with Vladimir Putin and Clark Clifford’s similar advice to Harry Truman with respect to Joseph Stalin.

The “ultimate aim of engagement,” according to Gurtov, “is to transform a relationship.” This need not imply friendship but only “mutual advantage.”    Gurtov’s book could be a primer for all those concerned to reverse global trends toward narrow, us-first thinking.