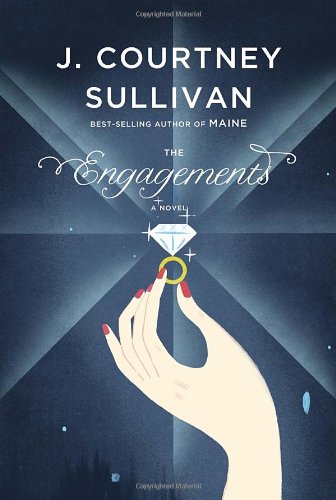 There is much to admire in J. Courtney Sullivan’s The Engagements.

Her writing is smart and transparent giving the feeling that she labors to find just the right descriptive detail to transport the reader into the time and place of her characters’ world.

And that’s no easy feat since Ms. Sullivan employs a layered structure to introduce numerous seemingly unrelated characters whose stories are told from different periods between 1947 and the present. She employs a variety of third person points of view, each period appropriate and distinct. Bravo.

Adding another layer of complexity, Ms. Sullivan weaves in some history of the diamond industry, and (Mary) Frances Gerety who was a copywriter at N. W. Ayers Advertising Agency. For many years, Ayers handled advertising for DeBeers Consolidated Mines, the world’s supplier of diamonds.

The Engagements opens in 1947 on the night Frances coined the slogan “A Diamond Is Forever,” and follows her career at various points in time until the late 1980s. In each glimpse of Frances’s work life, Ms. Sullivan captures the tone of those times, when it was accepted to treat women as inferior to men, regardless of their workplace contribution.

An interesting aside included in an author’s note is that two weeks before Frances’s death at age 83 in 1999; her enduring slogan, “A Diamond Is Forever,” was named the slogan of the century.

Frances is just one of a broad cast of characters. There’s Evelyn and Gerald, whose story opens in 1972 when they have been married over 40 years. We learn the history of their early friendship, romance, and marriage, as well as their current heartache over their only son’s failing marriage and questionable ethics.

It is 1987, when we first meet James, a financially strapped, sleep-deprived paramedic, and his wife, Shelia. James has made some mistakes, and no matter how hard he works to overcome them, he can’t help feeling like a poor excuse for a medic, husband, and father. It doesn’t help that he knows Shelia’s parents and sister believe she could have done better than James.

We first meet Delphine in 2003, seeking revenge on her younger lover, P. J., a gifted violinist, but unfaithful partner.

And then there are Kate and Dan in 2012, devoted partners, unmarried with a child, enmeshed in the final hours of prepping for the wedding of Kate’s gay cousin.

Each of these characters has their own engaging story, complete with its unique setting and cast of minor characters.

For much of the book, it is unclear how or if the characters from these different time periods are linked, creating more of a feeling of reading a collection of short stories, than one cohesive plot driven novel. From a writer’s standpoint, that is one more intricate element to admire. For readers, it may be a disadvantage trying to follow along and stay connected when one character’s “short story” ends midstream and jumps to another time period and a different character’s POV and storyline.

In the end, Ms. Sullivan cleverly reveals the link between characters in a way that may leave readers wondering, How did I not see that coming?