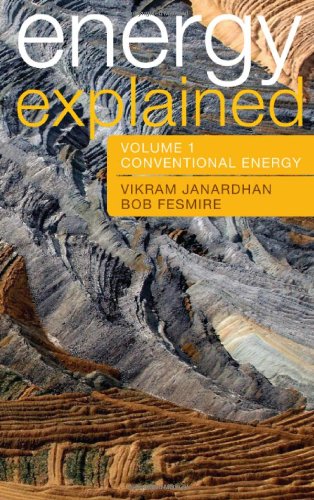 The purpose of this book can be found in the preface’s title: A Call for Energy Literacy. And the purpose is put to the test in answering this question asked by the authors, “Are we in danger of using up Mother Nature’s finite energy sources before we can shift to renewable ones?”

In answering, Vikram Janardhan and Bob Fesmire are optimists. Their method along the way is to take a weighty subject and make it an easy read, and although there are numerous charts and graphs and sidebar sections of various subjects and titles including “Fun Facts” and “Key Concepts,” there are no formulae other than e = mc2, which isn’t even presented until the second volume.

Constructed in two volumes—Conventional Energy and Alternative Energy, respectively—totaling over 600 pages, this book tries to do too much too casually, which may not be a good fit for its intended reader as it is absent of urgency, and even for the armchair scientist, as it is absent of very much detail once the surface is scratched. Perhaps this book was alternatively intended by the publisher for use as an undergraduate (non-technical or shallow-technical) text on energy policy.

Given the difficulty of connecting a weighty subject to a light reader, this book does makes a good companion piece to the slimmer and more pointed Lights Out by Spencer Abraham, previously reviewed on this website. Reviewing both allows comparisons; and in regard to facts and figures, both books agree on the major issues. Each has a different focus: Lights Out offers a “get well plan,” while Energy Explained, however optimistic, offers facts but has no plan. What Energy Explained does provide over Lights Out is greater context, and as a result both books yield some complementary value. In this review we address what can be found in Energy Explained that is not also in Lights Out.

Energy Explained: Volume 1 focuses on fossil fuels, while Volume 2, although titled Alternative Energy, is a grab bag of topics, containing sections on the expected alternatives of wind, solar, and hydropower, also revisiting fossil fuels used in transportation, plus a tiny section on nuclear energy.

Volume 1 begins with a short world history of energy use from whale oil to petroleum. The authors go back to first principles, referencing Watt but surprisingly, neither Newton or Carnot. Next, oil is presented in terms of geology, the kinds of source rock where oil may be found, where oil may be trapped by different underground rock formations. When oil is present somewhere underground, just as important is how it may be detected from the surface by use of sonar and seismology. There is a section on the mechanics of how oil is drilled but having been written prior to the BP oil disaster, little is provided on offshore oil platforms. However, the authors do presciently recognize that “poking holes deep into the earth can unleash tremendous energy.” Also identified are various government agencies involved in energy and the environment such as the EPA, but again, as the book written before BP, does not mention the Bureau of Minerals.

Not all oil is equal in content, some kinds are easier to refine than others; some have more pollutants that need to be removed, in particular sulfur, a component of smog. The cleaner the crude, and easier to refine oils naturally command a higher price. Oil refining is called “fractional distillation” and only a certain yield of a barrel of oil can be converted to gasoline. From a generic 42-gallon barrel of oil, a refinery can produce 44 gallons of refined fuel, of which 20 gallons will be gasoline and only 7 gallons diesel. Using a different process, called “cracking,” the percentage of gasoline converted from crude can be up to 70%. It’s called cracking because the chemical bonds of the oil are cracked using heat, pressure, and chemical additives.

The authors recognize that “one thing that is not debatable is that oil is running out.” The world consumes 30 billion barrels of oil per year with an estimated growth of 2%. This statistic was provided by the International Energy Association (IEA), which also claims that there is enough oil to last through most of this century (or 35 years, if no new sources of oil are found). How much oil exactly is in the ground is a moving target that depends on both the ability to find new reserves and the ability to extract more oil out of depleted reserves. The current estimate is that 25% of the world’s oil is undiscovered. The basis for this estimate of an unknown unknown however, is unexplained. One might even call this statistic proofy (see review of Proofiness by Charles Seife, also on this website).

The U.S. has gone from the world’s leading exporter of oil to the largest importer in less than 50 years. The rise in gas price per gallon over this time is a reflection of inflation but also of supply and demand. Big oil is not so much a monopoly as it is an oligarchy, and makes its money by selling crude to refineries. The price breakdown of a barrel of refined oil is given as follows: 55% of a barrel’s price is the extraction of crude, 22% from refining, 19% is taxes, and 4% from distribution and marketing. All in all, the cost of getting the oil out of the ground accounts for about half the price of what you pay at the pumps.

Although there have been no new refineries built since 1976, improvements in existing refineries and processes have permitted the capacity to mostly keep track with demand and pp until the 1990s, the U.S. has had surplus refining capacity. As today’s needs are now greater than the capacity to refine the oil that we get, the U.S. imports refined oil from Venezuela, the Caribbean, and (surprisingly) Europe. As Europe uses more diesel than gas it apparently has fuel to spare.

Volume 1 also provides a short history of OPEC, the Organization of the Petroleum Exporting Countries. Believe it or not the roots of forming oil cartels go way back to the U.S. Depression when FDR created the National Industrial Recovery act in 1933. The purpose of this act was to permit the U.S. government to set quotas in oil production by state, to stop oil from being sold at 10 cents a barrel when it cost 80 cents a barrel to produce.

The volume provides the history of coal: where it comes from, how it’s extracted, the varieties of coal composition and its energy content. Note that a midsized, coal-fired energy plant of 500 megawatts burns typically 3800 tons of coal per day, and the big four pollutants in coal are sulfur dioxide (acid rain), nitrogen oxide (smog), mercury (birth defects), and particulates (asthma). Burning coal also releases C02, the greenhouse gas, of which the above noted 500 megawatt plant releases 10,000 tons per day. “Clean coal” falls under the umbrella of several processes that remove the big four pollutants. Coal gassification is identified as an “exciting” technology that does not burn coal but converts it to synthetic gas but to no surprise has drawbacks. The principal one is that coal gassification is expensive and so currently exists in only two commercial plants, and still emits CO2.

The authors’ opinion on greenhouse gasses and global warming straddles the fence, not willing to take a side, stating “one point here is that we really don’t know what we are working with, only that the potential damage to our planet could be enormous and irreversible.” The authors, to be fair and balanced, or perhaps fearing that offense will prevent their book from being accepted as a textbook, also provides the “There’s no such thing as global warming” contrarian viewpoint.

Assuming that one does believe in global warming, and that mankind is a significant contributor, the book does identify various methods of removing C02 from coal, all of which have drawbacks:

But once the C02 has been removed, sequestered, the question remains as to what to do with it? Only two choices are presented, which are putting the C02 underground or under the sea. The policy of cap and trade is not discussed, which is a surprise.

This volume also has a section on natural gas and natural gas turbines, which are clean, but have the same downside of emitting greenhouse gases, and also being tied to the oil supply, and not being able easy to transport as oil. This discussion then leads into a section on “unconventional gas” which are oil based fuels that aren’t easily extractable such as gas and oil trapped in sandstone, coal beds and shale. Exploitation of unconventional oil sources will depend on the economics of supply and demand, i.e. as the cost of “easy” oil goes up, the cost of extracting “hard” oil gets closer to becoming profitable.

Hydrogen, an alternative energy source is addressed in volume 1 because most of hydrogen today is derived from natural gas, not through electrolysis of water (which is energy intensive). And anyone who pushes hydrogen as a solution to our energy problems without also addressing the supply . . . perhaps just might be hiding something.

Volume 2 starts with the history of use of the sunlight as a direct source of energy. Then provided are sections on extracting power from alternative sources such as wind, tides, waves, geothermal, and biomass. Also covered are methods of energy storage, including pumped (raised water, compressed air), batteries, and flywheels. The grab-bag part of Volume two follows with a consideration of the relative energy efficiency of ships, planes, trains, and automobiles, which leads into the differences between gas and diesel fuel, and into a consideration of alternative fuels for automobiles. The very short discussion of nuclear power was perhaps an indication that the authors themselves were running out of steam. The book does, however, conclude with several detailed sections on energy conservation and what you, as an individual, can do, along with their plea to “keep on with whatever got you to pick up this book in the first place.”

Although popularizations of energy reviewed to date tend to be superficial or politically biased one way or the other, it is certainly better to have something out there in the world open for discussion than to have nothing and be left in the dark.