The Energy Cure: Unraveling the Mystery of Hands-On Healing 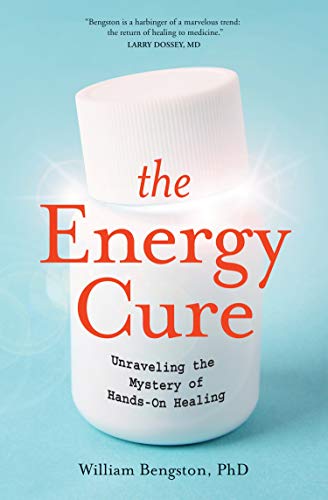 “If the man doesn’t believe as we do, we say he is a crank, and that settles it. I mean, it does nowadays, because now we can’t burn him.” —Mark Twain

Or maybe we can. Bill Bengston has certainly had the experience of being burned during his career; no matter, he continues toward his dream of developing a vaccine to prevent cancer in human beings.

Through centuries, hands-on healing emerged independently as a tradition in most cultures; in the last 300 years, it has been severely repressed. Hands-on healing principles lie in practices like Chinese acupuncture, in which needles are inserted at specific body points to unblock the flow of chi (energy) and Indian yoga, in which physical and breathing practices are used to activate chakras (energy centers) in the system. Such Eastern practices are supported by quantum physics, which describes the material world in terms of energy fields.

In The Energy Cure, author Bengston asks us to reconsider what we believe about our ability to heal. Together with Sylvia Fraser, he writes about his experiences with hands-on healing, his successes, solutions, disappointments, and discoveries, and his experiences with many colleagues, patients, and mentors, perhaps most notable among them Bennet Mayrick and Dr. Bernard Grad. The book includes photos of Bengston and Mayrick, and a series of photos of lab mice at points during hands-on treatment against cancer. There is only one chart of research data; this man’s story is told in his own voice.

Ben Mayrick amazed Bengston with his ability to heal people. Mayrick could feel hot spots in the body which needed attention; he could also discern when a person had had all the energy they could take at the moment. Mayrick healed through detachment, distracting his mind from his hands and allowing them to move naturally, instinctively, without direction from intellect or ego. He did not believe he was the origin of the healing power that cured patients. His did believe that his connection with original “source” energy was natural, and that conscious thought disrupted his ability to conduct healing energy.

Bengston eventually discovered his own ability for energy healing. His method is not faith based; neither patient nor practitioner is expected to believe in anything for the process to be effective. It is, however, highly effective: he has experienced no failures treating cancer if 1) the person completed the treatment and 2) the person completed it before having radiation or chemotherapy, which kill healthy cells along with cancerous ones.

The Energy Cure includes numerous case studies. Bengston and Mayrick discovered various effects of hands-on healing, which they named after the patients who exhibited the effects. They also experienced what Bengston calls “the boggle effect,” the rejection of scientific data on the grounds that it is too good to be true. Mayrick once treated a woman who had cancerous tumors. Afterward, tests showed no sign of tumors. A cure is a cure, right? The patient chose to be obedient to the rule-book and took a treatment her doctor recommended for a tumor condition; the treatment killed her. Another time, Mayrick cured a patient of gangrene. Unlike cancer, gangrene does not remit. The patient’s doctor told her, “If I accept this, I’d have to throw out my medical training. What I’ve seen here is impossible.”

Bengston’s experience in pure and applied science is expansive. He has taught research methods, criminology, and the sociologies of religion, science, and the paranormal. “I went into the lab to verify and gain insight into a procedure that I had already successfully used to cure many people of a variety of medical problems, especially cancer,” he says. Mayrick was reluctant; Bengston continued.

His research has produced the first successful full cures of transplanted mammary cancer and induced sarcomas in experimental mice by hands-on techniques that he helped to develop. Bengston says, “Mice bred for research were injected with a particularly lethal strain of mammary cancer that had always resulted in 100 percent fatality within fourteen to twenty-seven days. Through hands-on healing, these results were completely reversed: 100 percent of the mice survived the disease to become cancer free and to live a normal two-year life span!” He also found that treated mice, re-injected, didn’t take cancer—they had developed immunity.

Modern health care is controlled more by tradition, money, and politics than by scientific data. No wonder Bengston is confounded by the refusal of so many people in the medical profession to even look at evidence that suggests they may not have all the answers. He is clear about this: Energy healing does not dispute the value of Western medicine. “In attempting to find a cancer vaccine based on energy healing, I’m not wishing to debunk Western medicine. I’m simply trying to find a way of making what I have experienced fit together with what more conventional researchers do, thus opening up new fields of discovery.”

What if doctors and scientists, and patients could be trained to understand that energy healing can be effective? Could they see it as a complement, rather than a threat, to traditional science? Could they release the protective hold on their orthodoxies for the betterment of their fields? Even in the world of energy healing, there is division between clinicians and researchers, those who embrace practical and academic work. Even someone who taught Bengston’s technique (in an official curriculum) to medical students did not use it to treat her own cancer. What was her energy doing, if not demonstrating the difference between intellectual acceptance of energy healing and the willingness to defy the societal bias against it?

Bengston calls himself “a faithless person who relies on experience and data.” Yet he is willing to reveal something about the feelings that he sometimes experienced while he treated mice—a systemic sense of warmth, a detachment from hands and body, a sense of oneness with the mice, of peace and well-being, his mind empty of thought, simply being, relaxed and happy—feelings he can’t consciously re-create and which he calls a gift of grace. He says healing happens automatically, and that it’s like traveling to a place where everything needed for healing is in infinite supply. This is not unlike a professional athlete who is “in the zone,” simultaneously concentrating and “letting go.”

In The Energy Cure, Bengston discusses many energy healing systems. In each one, “something” happens between people that allows information to be exchanged and which currently defies the analysis of conventional science.

After a thorough disclaimer, the Bengston Energy Healing Method™ for applying hands-on healing is presented. The two-step method distracts the attention of healer and patient and prevents them from interfering in events on the unconscious level, where healing is believed to take place. Specific rules are given for the steps, which include making mental images and cycling through the images, to speed up neural activity. After developing the cycling technique, Bengston learned that some Buddhist monks and yogis meditate by speeding up brain activity, rather than by slowing it down. Cycling is used to work with memory, attitude, and the capacity to envision, and it may also create long-term beneficial changes in the brain, like meditation has been shown to do.

Specific instructions are also included for individual cycling practice, starting with meditation, breath awareness, and self observation; for hands-on training with a partner, including the practice of gratitude; and for increasing energy flow in groups, with repeated practice. Additional suggestions include special tips for novices, cautions against setting rituals, and advice for continuing the healer-patient relationship.

Bengston shares observations he calls “green lights” and “red flags,” along with logistics for practitioners and suggestions for remote practice.

Last, the research guide describes various approaches to studying energy science, including work done in communicating with plants and machines, with Bengston concluding that “not only was the future fluid, but also the past!” which might remind the reader of Cambridge professor Stephen Hawking’s theory of quantum superimposition. There is also discussion of measuring human intent and emotion as causes of measurable, replicable physical effects. These principles have been proven in the laboratory; when Western society incorporates them into everyday thinking, energy healing will be fully embraced.

Hands-on healing was used as a medical practice in ancient Greece. The “father of Western medicine” himself, Hippocrates, relied on his skills of observation and the principles of cause and effect. He said, “It has often appeared, while I have been soothing my patients, as if there were some strange property in my hands to pull and draw away from the afflicted parts aches and diverse impurities.”

Bill Bengston says, “Perhaps we’re finding answers to questions we haven’t thought to ask.” The Energy Cure is for readers who are open to gaining a greater awareness of their own potential and an expanded sense of the possibilities that exist beyond the limitations invented by humans. Perhaps it’s also for physicians who are confident in expanding their Hippocratic oath.