The Enemies of Rome: The Barbarian Rebellion Against the Roman Empire 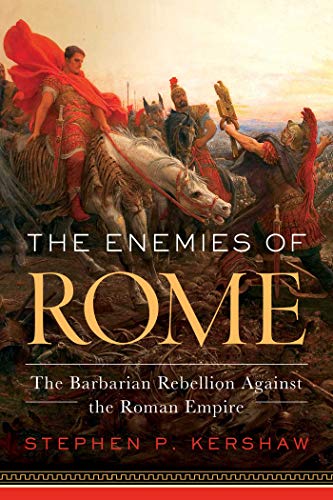 “History is written by the victors,” is an old saying, and nowhere has this been more true than ancient Roman history. The classic texts by Livy, Tacitus, Polybus, and other Roman historians have been studied for centuries with their tales of war,conquest, and political intrigue, always from a strictly Roman point of view.

This volume flips traditional Roman historiography by examining the Roman Republic and Empire from the perspective of Rome’s enemies, a fascinating project that offers some interesting insights into the accepted descriptions and interpretations of Rome’s reign as the pre-eminent ancient power of the Mediterranean basin.

Much like the ancient Greeks, the Romans considered anyone who wasn’t a Roman citizen to be a barbarian, so beginning from the founding of Rome and the conflict with the Sabines, the author examines the many opponents to Rome’s rule, both internal and external, and how Rome was able to either incorporate,  rule, or keep at arm’s length the dozens of tribes and factions encountered in the almost 1000-year reign of the Roman Republic and Empire. Along the way he offers some fascinating views on how barbarians were viewed by Roman historians, almost always with an eye toward the glorification and enhancement of Rome.

First, barbarians could be viewed as noble savages, not Roman to be sure, but possessing courage and skill, and maybe even intelligence and cunning that challenged the great captains of Rome. Hannibal was probably the prime example, the Carthaginian occupying a unique place in Roman annals as probably the greatest foe classic Rome ever faced. Of course, this only made the triumph of Scipio Africanus more glorious as he vanquished this scourge of Rome and began the events leading to the final destruction of Carthage.

Barbarians could also be viewed as being somewhat more courageous and noble than their Roman enemies, especially if the Roman general was someone that the historian had an axe to grind, yet they still weren’t as civilized as Rome itself.

Of course, as the author also notes, this definition of who was a barbarian and who was truly a Roman became somewhat vague in the later years of the Empire, particularly after the split into the Western and Eastern Empires and the beginning of the great migration of Visigoths, Vandals, and other tribes into the borders of the Western Empire.

As the barbarians begin to assume more power and prestige, becoming virtual chieftains within the Empire, the lines continued begin to blur with so-called barbarian leaders engaging in war to assume the mantle of leadership over the remains of the Western Empire. When the final sack of ancient Rome occurred around 476 CE, the new ruler, Odoacer, no longer called himself an emperor, took the title of king and ruled what remained of the former empire as a rump state from his own capital separate from Rome.

This is a superb alternate look at Roman history, because even though the author uses many of the expected primary sources, he does a masterful job of reinterpreting those sources, adding additional primary sources, and using recent discoveries and studies in archeology to offer a truly fresh look at western civilization’s most enduring empire. For any student looking for some important context of these classic texts, this book is an excellent resource.