End of The Good Life: How the Financial Crisis Threatens a Lost Generation—and What We Can Do About It 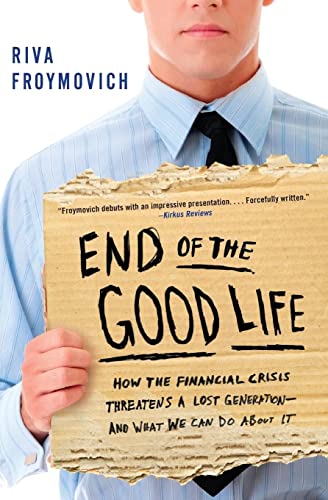 “In its crisp brevity, End of the Good Life should be read by the under- and unemployed millions of Millennials.”

The United States loves its mythology. One of those great myths is the American Dream.

What makes the American Dream a myth? Myths, traditions, and customs rely on this very simple premise: if one does something for long enough, therefore it is correct.

The Millennials have inherited these traditions from their Boomer and Greatest Generation descendants. The American Dream is a post-World War II phenomenon resulting from a unique set of socioeconomic and geopolitical circumstances.

Great Britain also came out on the side of the winners, but was broke and soon to lose a global empire.

The Soviet Union, after fighting against the Nazi war machine, had a society that was devastated and depopulated, triumphant but still beholden to Stalinist terror.

France, relatively intact, had to work out issues involving Nazi collaboration and an accepted anti-Semitism stretching back to the Dreyfus Affair.

But the United States escaped physical devastation and economic hardship, harnessing a massive industrial base, a culture that advocated saving earnings, and the social safety net created by the New Deal. Being separated by two oceans also helped.

So again what is the American Dream? A home in the suburbs, two kids, and a car in every garage. To put a Barthesian spin on it, the American Dream is shorthand for white suburban America and the real possibility of upward mobility, a college education, and a capacious social safety net.

Now what? Riva Froymovich attempts to answer that in her book, End of the Good Life: How the Financial Crisis Threatens a Lost Generation—and What We Can Do About It.

In a series of vignettes, Ms. Froymovich, a reporter from the Wall Street Journal and Dow Jones Newswires, relates the devastating and global impact of the economic meltdown.

She profiles American, European, and Asian individuals struggling to make ends meet in these new hard times. College educated but saddled with student loan debt, paying for the mishaps of deregulatory mania in the financial sector and hopping from one short-term contract to another, if employment is found at all, these individuals show the human faces of the Great Recession. (Whoever coined the term Great Recession had a gift for understatement.)

Ms. Froymovich also points out the specific hardships endured by Millennials, the population born between 1976 and 2000. (This reviewer is a Millennial, born on the earlier end of the spectrum.)

In addition to the deregulatory mania, Millennials, especially those with student loan debt, have to contend with the reality that there are no bailouts for them. Sink billions in investment fraud, the government will drive up dump trucks full of money for the executives who engineered it. Have thousands of dollars of student loan debt, suck it up!

Coupled with these bailouts is the worldwide trend to enact austerity measures, meaning funding for the social safety net gets eviscerated with the addition of increased taxes. Ms. Froymovich explains with devastating clarity that this is exactly the wrong strategy for economic recovery.

While the problems are enumerated, this book triumphs in its second half, where she puts forward a series of solutions. Some are sensible and practical, others are more pie in the sky. But all are worth contemplating since worldwide governments and the corporate world seem keen on solving the Great Recession.

Solutions involve everything from schools emphasizing vocational training as opposed to the assumption that all high school students are destined for college. A more idealistic notion is the creation of a Cabinet-level position for an Office of Youth since young people are notoriously underrepresented in government discussions.

In its crisp brevity, End of the Good Life should be read by the under- and unemployed millions of Millennials. The global prospects are bleak, the global economic situation still dire, and the government doesn't care about you (unless the campaign contribution is hefty).

What does that mean?

Millennials will have to find the solution. Look at it this way: Who do the Greatest Generation and Boomers ask when they have a computer or technological issue? Fixing this awful financial catastrophe has got to be somewhat easier than explaining how email works to someone computer illiterate.

With the flames subsiding, now is the time to stop complaining and to start brainstorming on the solutions needed to claw out of this global financial disaster.