The End and Other Beginnings: Stories from the Future 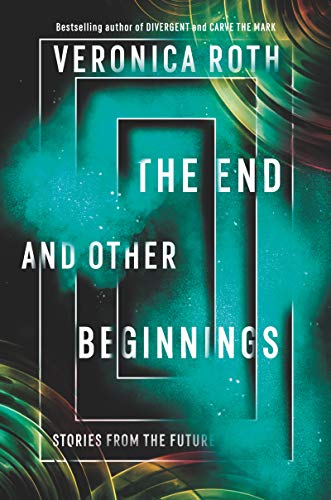 “Each story shows us a new world, a future world, a unique world unknown to the reader and populated with exquisitely drawn characters.”

From Veronica Roth—author of the highly acclaimed Divergent series—comes an amazing collection of new stories. These six tales are science fiction at its best, as much about the human spirit as they are about future technology and what it can do for us—or to us. But no matter what the future holds, people must confront and solve problems, some more challenging than others. Each story offers both an ending and a new beginning; the stories are circular, the beginnings and endings meeting at an arc on the circle, each enhancing the other.

“Inertia” introduces a new technology that allows people to say goodbye to their dying friends. People leave lists of who they want to see one last time in a final visitation. Medical staff connects visitor and patient with high-tech equipment, and for an hour they share favorite experiences as if both were still present. Secrets are revealed, regrets resolved, and love declared. “I’ll miss you,” Claire says as the visitation draws to an end. Matt asks, “It was a good story, right? Our story, I mean.” Claire answers, “The best.” But as the book’s title promises, the ending is only the beginning.

“The Spinners” depicts an Earth populated by a variety of extraterrestrials. Earth welcomes the diversity. Most of the aliens wear digital skins so they look more like Earthlings. All are welcome except the symbios, which people call leeches, because the creatures latch onto a human spine and take over mind and body. Atleigh is a leech bounty hunter after the one that killed her mother. “Glinting at the back of his neck was his other body, the silver streak of the leech.” She learns not all leeches are the same.

In “Hearken” Darya has perfect pitch: a prerequisite for becoming a Hearkener. That means two things to her mother: “Being employed by the government—a stable job; and carrying an expensive piece of equipment, the implant in your head—which meant immediate evacuation if the country was quarantined.” That’s a very real possibility; people wear masks to protect against the constant threat of bio-bombers who want to destroy the world. Hearkeners hear the dying’s death song and the living’s life songs. Darya must choose which will be her life’s work.

In “Vim and Vigor” two boys ask Edie to prom, and she can’t decide between them. Edie’s friend hooks her up to the Elucidation Protocol, a mind-blowing virtual reality that reveals probable outcomes of difficult decisions. “Evan was intellectual, daring, opinionated,” Edie thinks. “Chris was kind, openhearted, enthusiastic. And when she was with them, she was those things too.” It isn’t just a choice between two boys; it’s a choice between two Edies. The decision she makes in the end signals a new beginning.

In “Armored Ones” Roth offers two new stories from her Carve the Mark series. In this universe, Teka who must kill the sister of the man who killed her father and removed her eye. But the woman possesses the awesome power to inflict severe pain on anyone she touches. And Akos uses his own special power to face a great armored beast to prove himself worthy of leaving his life of servitude and becoming a warrior. But first he must kill the armored beast that trusts him. Is there no other way?

In “The Transformationist”extreme ascetics, transformationists, believe in, “. . .  unmaking. Self-annihilation. Even water . . . must boil before it is pure.” On a short release from prison, Otho returns home to a brother who hates him and a mother gone because of what Otho did. A friend is ready to testify that Otho’s mother’s death was not intentional. But Otho believes he deserves prison, until an ending promises a new beginning.

Roth excels at world-building in her novels, and this story collection is no exception. Each story shows us a new world, a future world, a unique world unknown to the reader and populated with exquisitely drawn characters. The attractive book design includes richly drawn black and white art throughout.