Encyclopedia of a Life in Russia 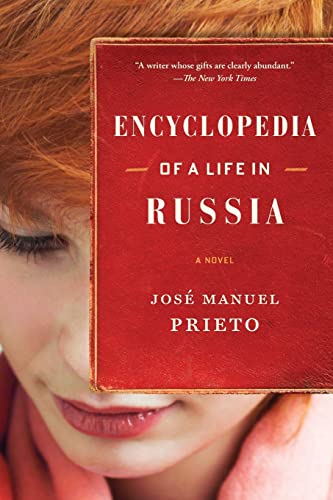 Encyclopedia of a Life in Russia by Jose Manuel Prieto is organized alphabetically like a reference book. Each entry provides information or a discourse on some topic either relating to life in Russia during the fall of the Soviet Union or reflecting the narrator’s interests.

This mostly plotless novel is narrated by the psudonymously named Thelonious Monk who travels to Russia and meets the lovely red-haired Linda Evangelista (also a pseudonym). He explains: “You already know the story: THELONIOUS arrives in Saint Petersburg in search of LINDA, the young woman he requires in order to carry out a delicate experiment. They are to make a trip together to YALTA, in the Crimea, if all goes well, to Nice. The story takes place from late spring to early winter of 1991, months before the COLLAPSE OF THE IMPERIUM.”

This passage, from the opening pages of the book, is practically the only cohesive linear plot line found in this novel.

A
Asterisk. Asterisks are scattered throughout the novel without any referents.

Audience. This work is written for highly erudite scholars of world literature and Russian history.

Annoying. This work is taxing to read; its novelty wears off quickly.

B
Bloviate. The prose is often windily verbose. Though eloquent and clear, the writing is rarely succinct and to the point.

C
Contrived. The encyclopedic structure is a bit gimmicky.

Clever. Although the encyclopedia structure seems contrived, it is quite clever, as is much of the writing and many of the observations throughout the novel.

Critique. Encyclopedia of a Life in Russia is a critique of Soviet Russia and of crass capitalism.

D
Digressive. Since there is no plot to speak of, the book is basically a series of digressions.

Educational. The work includes both interesting and tedious tales of and references to every topic imaginable.

F.
Funny. At times the narrator is amusing and witty.

Frivolous. While academic and weighty in parts, it is also silly and light in other sections.

G
Geography. The novel provides a number of detailed discussions about the geography of parts of Russia.

H
Historical. This work includes an extraordinary number of historical references and lessons.

High Brow. Though amusing at times, this is not a light read.

K
Knowledgeable. Prieto clearly knows a lot about many things including world literature, history, and even popular culture.

L
Literary. This novel is crammed with countless literary references.

Low Brow. There are also some references to pop culture of the 1980s including Vanilla Ice, and Linda Evangelista.

M
Multilingual. Significant portions of this book are comprised of passages written in various languages including French, Hebrew, Russian, Latin, and Italian.

N
Non-Chronological. The narrative jumps from time to time and topic to topic.

Notes. There are no endnotes or footnotes despite the random superscripts dotting the pages of the text.

O
Obscure. Many esoteric references and discussions crop up in the book.

Q
Quotations. There are tons of lengthy citations.

S
Self-Indulgent. The novel serves as a forum to showcase the writer’s erudition and interests.

T
Translated. The Encyclopedia of a Life in Russia was skillfully translated from the Spanish by Esther Allen.

U
Unreadable. In places.

Y
Yawn-Inducing. From time to time.

If you enjoyed the structure of this review and are interested in a postmodernist novel that’s sort of about post-Soviet Russia, you might enjoy tackling Prieto’s The Encyclopedia of a Life in Russia.