The Enchanted: A Novel 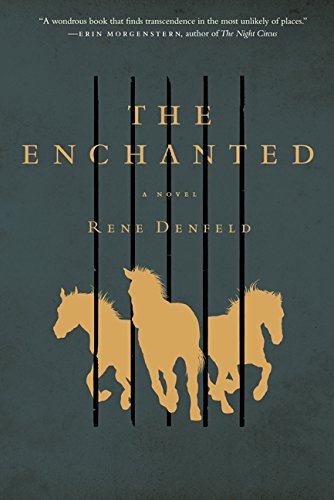 “The Enchanted is indeed both a beautiful and a painful read, one that explores the complexities of many crucial issues . . .”

This is probably not a book to read if you're depressed or feeling raw to the world's cruelties.

Cruelty and pain abound in Denfeld's debut novel about an archaic, unnamed death row prison. Narrated by one of the inmates who survives his time in this dark ages dungeon by reading and retreating into a fantasy world, The Enchanted offers the reader a glimpse into the darkest corners of society and the human heart.

Focusing on the plight of the narrator, two other inmates slated for death, a death penalty investigator—known only as The Lady—a "fallen" priest who attempts to minister to the inmates, a humane and likable warden, and a few other supporting characters who run the gamut from damaged to irredeemably psychopathic, the book contrasts a Spartan setting and episodes of profound violence with the fantastical—even transcendent—images of the narrator's imagination, an illustration of the defense mechanism employed by traumatized children.

Trauma, abuse, pain, and their ripple effects are pervasive in the lives of all the characters in one form or another, prompting contemplation on the age-old puzzle of how to deal with the lasting effects of trauma. It also leaves us with the moral conundrum of what constitutes a just fate for the death row inmates, many of whom are both victims and perpetrators of heinous violence. It soon becomes clear that one of these prisoners, York, sincerely wants to die, throwing the purpose of The Lady's job into question as reflected in the following exchange between her and the priest:

"We all die," she says. "For some it just comes earlier."

He steps closer so he can look into her face. Concern has etched his brow. "Life has meaning," he says.

She feels more naked than ever before. She thinks of York and his mother. She thinks of his pet rabbit.  Her eyes feel suddenly wet. "There is too much pain in the world, that's the problem," she says, her voice low and husky.

"Pain and beauty, and beauty in the pain." His voice is a whisper that strokes her."

And this seems to be the central idea explored in the story:  "Pain and beauty, and beauty in the pain."

Yes, there can be beauty borne from pain in the sense that pain can lead to great insight, growth and realizing a strength one didn't know they had. It is even greater if the insight or strength can be cultivated into something that can be shared with others like a work of artistic creation or advocacy that helps others.

This belief can also represent a means of survival if one has little control over the forces causing them pain, such as children at the mercy of abusive adults or a prisoner in the hellhole of death row portrayed here.

But this belief also has a dark side in that it runs the risk of slipping into masochism and can possibly lead to pacification of a victim who may have some control in possibly freeing themselves from what is causing them unnecessary pain—a pain that is beyond a catalyst for beauty or growth or strength, but a pain that simply breaks the bearer.

One plot twist toward the end of the story seems to explore this possibility as a barely adult prisoner, whom the system in its profound stupidity has tossed into a den of hardened sadistic criminals and guards for a nonviolent offense, takes his revenge.

The Enchanted is indeed both a beautiful and a painful read, one that explores the complexities of many crucial issues, including how we treat our children and the vulnerable and the consequences of our actions. It also makes us ask whether our personal behavior, social policies, and the justice system perpetuate more pain than otherwise for humanity.

Natylie Baldwin, a freelance writer, lives in the San Francisco Bay Area. Her fiction and nonfiction have appeared in various publications including Sun Monthly, Dissident Voice, Energy Bulletin, Newtopia magazine, The Common Line, OpEd News, and The Lakeshore. She is co-author of Ukraine: Zbig’s Grand Chessboard & How the West Was Checkmated.