The Enchanted Clock: A Novel 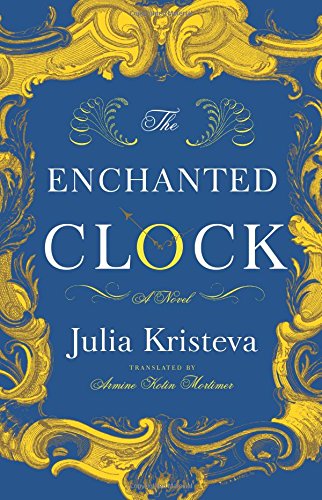 “calling it literary is a stretch. Even the most ardent art critics will surely tire of it after 318 pages.”

The Enchanted Clock begins with an interesting premise: A psychoanalyst and magazine editor and her son become obsessed with a clock made for Louis XV, which then becomes the centerpiece of a mystery when it is found next to the dead body of a fellow editor. The story “combines past and present, jumping back and forth between points of view and across eras from eighteenth-century Versailles to the present day.” Disappointingly, however, The Enchanted Clock fails to deliver.

This book struggles from the beginning to understand what it really is. Is it a novel, a fable of sorts, or some sort of art piece designed to woo the more literary minded?

The Enchanted Clock unfortunately reads like a big mess of psycho-babble. It is pretentious, confusing, unrelatable, and unrealistic. It is less a novel than a collection of sentences strung together in what seems to be an attempt at being arty or intelligent. It reads as though it were expressly written to be read aloud at a trendy open-mike night, at worst, or, at best, some sort of literary salon.

Nothing, it would seem, can salvage this book—not the characters, the plot, or even the overriding themes, which, instead of being gently woven throughout the book, are relentlessly hammered over the reader’s head.

First off, the characters are unrelatable and difficult to understand. In fact, they’re not really characters at all, but more like jumbled thoughts or emotions stuck together to represent what is hoped will look like real people.

The main character, Nivi Delisle, a psychoanalytical magazine editor (this was only clearly understood by reading the book jacket, by the way) is a disjointed, scattered wreck who floats through the book with no clear vision of reality beyond her odd relationships with the astronomer, Theo Passemant, whom she confusingly calls “Astro,” and her son, Stan, who suffers from the occasional coma. You know. Like most kids.

From the get go, It is difficult to decide who’s more annoying, Nivi, who does not seem to operate in reality and spends most of her time fantasizing about her sex life (real or imagined) with Theo, or Theo himself, who is apparently supposed to be some sort of wise being who speaks only in “astro-speak,” which consists of either facts and numbers about various aspects of the universe or wide philosophic generalities.

Everything about this couple is silly and unconvincing. For example, the two meet when he rescues her from drowning. He pulls her out of the ocean, where she just happens to be casually swimming before she begins to “laugh too much” and subsequently starts to drown.

Once she’s revived, she tells him her name, which he recognizes from reading all of her academic books on depression—even though he’s an astronomer who just so happens to be out sailing a boat on the ocean that day. They then make love, and she later discovers, remarkably, that he’s the descendent of the man who made the antique clock with which her odd son is now obsessed. If your head isn’t hurting by now, it should be.

The pseudo-mystery plot with its unrealistic, unconvincing, and just plain confusing twists, is also not enough to carry the book, nor is the book’s commentary on love and time, the thematic structure upon which Ms. Kristeva’s attempts to build the book.

Her didactic, stream-of-consciousness prose is too heavy for this particular scaffolding, the result of which is that the whole thing comes down on itself. Her musings about life and love and the passage of time would be better served as essays or perhaps even poems, not forced into a novel with characters and a plot. What may have been somewhat interesting observations—if you can get past the open-mike night beat—become pretentious and boring in this particular literary form. And calling it literary is a stretch. Even the most ardent art critics will surely tire of it after 318 pages.

Michelle Cox is author of the Henrietta and Inspector Howard historical mystery series.