The Empire Strikes Out: How Baseball Sold U.S. Foreign Policy and Promoted the American Way Abroad 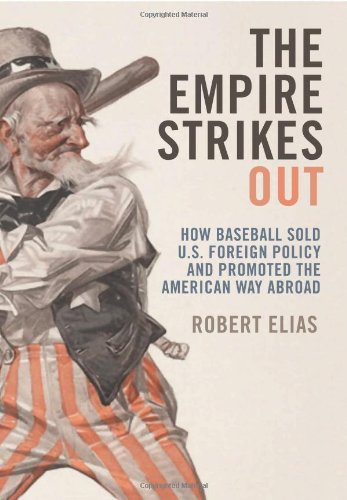 “the main points of this powerful book . . . ought to be on the reading list of every university course on American Foreign Policy.”

Major League Baseball is part of American imperialism, argues Professor Robert Elias in this riveting history of the way the majors have connected themselves to United States foreign, military, and globalization policy, sometimes driving it as well.

If you have long thought of MLB’s reach abroad as benign and simply a way of spreading Mom’s apple pie/baseball/liberty to foreigners, think again. Baseball contacts in other countries are usually based on the acquisition of cheap labor as part of MLB’s continuous drive for more profits. MLB “dominates other baseball-playing people and nations abroad,” Professor Elias declares, “substantially controlling ballplayers and baseball institutions in other lands.”

Those are the author’s conclusions in his final chapter. He uses the rest of the book to prove his point. Beginning with the post-Civil War era, he tells how baseball “heroes attained the status of political and military leaders” so that they became useful to the U.S. government. By the beginning of 19th century baseball’s attachment to its missionary goals abroad could easily merge with U.S. policy in general.

He explains the famous A. G. Spalding World Tour in 1888 as forthrightly presenting itself as a way to “wrap the game in the flag” as well as to make money. Spalding’s World Tourists paved the way for a time when American products and entertainment would dominate world markets, as they do today.

Plenty of proof can be found that the U.S. military has long used baseball as a means of pacification and social control in countries it penetrated. Professional baseball benefited by this relationship, finding players that could be imported at low cost. So did sporting goods companies, finding and establishing foreign markets for baseball items and sometimes establishing factories where they could use cheap labor to produce them. This sort of relationship continues today in more than one country.

American interests are not always advanced through baseball diplomacy. Countries have canceled their baseball leagues or prohibited American players from entering when their leaders become displeased with American intervention in their affairs. Americans seldom think of their country as an imperialist nation, but reviewing its history in this book brings a reality check to readers who might need to brace themselves for learning the way U.S. foreign policy (and foreign baseball policy) is much too often based on invasion of lands whose leaders fail to appreciate the imposition of American capitalism, especially to advance the interests of sugar, oil, and banking companies.

Foreign countries have used baseball for their own purposes, too. It may surprise readers who associate baseball with democracy to learn that baseball was used by Mussolini in Rome’s Fascist Academy in the 1920s as well as by England’s Royal Air Force Cadet Training College in 1936. In 1935 the Soviet Union, then still deep in the throes of communism, sponsored a program to promote baseball as a national sport. Dictator Rafael Trujillo used baseball, says Professor Elias, “to help maintain control and to distract the masses from his government’s rigged elections, repression, and murder,” as did Dictator Anastasio Somoza, who declared baseball to be Nicaragua’s national sport, building a national stadium and subsidizing teams. These moves came about, as the author states, partly because “U.S. officials embraced baseball as their primary vehicle for invading other cultures.”

Official American promotion of baseball abroad has not always been beneficial to our national game or even to our nation in general. Connecting baseball with foreign policy means that when nations reject our foreign policy and consider us aggressive, hateful, and domineering, they may reject baseball, too. Or, like Castro, they might turn baseball into a political tool against us.

It’s a bit disheartening to be persuaded, as one must be in reading this book, that for 200 years professional baseball has “aligned itself with conservative American policy and with an increasingly aggressive U.S. foreign, military, and globalization policy.” MLB’s promotion of patriotism, masculinity, nationalism, and Americanism at home has buttressed its assistance of American imperialism abroad.

Readers of this book may begin to realize that it’s possible to support American ideals without always promoting current American foreign policies. Evidently, MLB has no grasp of this goal, since it has almost always gone along enthusiastically and mindlessly with whatever invasions, wars, or other power plays our government engages in, whether sizable numbers of citizens agree with them or not. In this way MLB has become part of the establishment, expecting players to support the Vietnam war, boasting of its contribution to the Korean conflict, aligning with every military invasion, aiding in exploiting those made poor by their countries’ dictators, sending players to war zones to raise the morale of troops, keeping as many professional players as possible out of wars, and buttering up American presidents no matter how unpopular their policies were.

Unlike the Baseball Hall of Fame and Museum in Cooperstown, which has always supported presidential policies, that alternative baseball institution, the Shrine of the Eternals, in July 2011 set up a full exhibit called “Patriotic Pitch” at the Pasadena Central Library centering on Professor Elias’s book.

As part of the program connected with the exhibit, Jean Hastings Ardell, a baseball historian, presented a keynote address pointing out that The Reliquary’s exhibit challenges establishment thinking by arguing that true patriotism, like true support of the national pastime, means supporting not the institution’s current foreign policy is but what that institution can and should be.

That goal may be beyond the ability of MLB’s leadership to grasp. The Empire Strikes Out should be required reading for anyone who aspires to understand how professional baseball came to be in its present position of ultra-conservative defender of the status quo. He even offers a few suggestions for ways MLB might crawl out of this situation.
The few factual lapses in this book are far outweighed by its value but may be worth mentioning. In his chapter on World War II, Professor Elias states, “To compensate for dwindling men’s teams, women began playing baseball during the war.”

Actually, American women have been paying baseball since at least the 1870s. Their professional wartime clubs were established not by the women players but by a men’s pro club owner who feared that the men’s professional teams, weakened by losing players to the war, would bring in too little revenue. When the war was over, the club owner withdrew his support, so the women’s pro leagues collapsed.

Professor Elias also accepts the unsubstantiated story of Alexander Cartwright’s having taught baseball in 1849 all across the country from New York to Hawaii; because of the recent research of Monica Nucciarone and John Thorn, baseball historians now reject that assertion.

These flaws fail to weaken the main points of this powerful book, which ought to be on the reading list of every university course on American Foreign Policy.