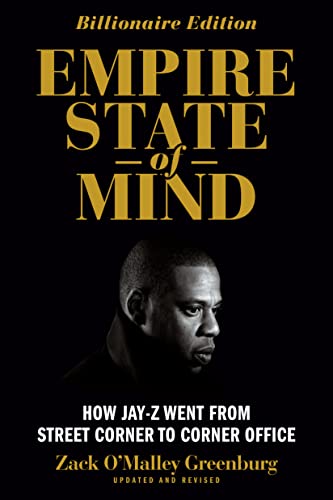 “I’m not a businessman—I’m a business, man” is the reoccurring theme of this book.

For those who may not know Shawn Corey Carter (aka Jay-Z), he is a former street-level drug dealer turned hip-hop artist turned mogul turned icon. Or should I say the mogul turned icon? He is, effectively today, a brand unto himself.

“In November of 2009, Newsweek declared Jay-Z the fourth most important newly minted tycoon of the decade. . . .” That is powerful stuff. He is a powerful guy and perhaps the second richest hip-hop star, behind Sean “Diddy” Combs.

If this “. . . . business, man” declaration is accurate it leaves the author trying to answer “on what basis?”

This question persists throughout the book. Mr. Greenburg struggles through multiple interviews to firmly establish whether Jay-Z is a ruthless, no holds-barred businessman—or a really nice guy?

The first six chapters of Zack O'Malley Greenburg’s book take us comfortably through the story of Jay-Z’s background, hard start, challenges, opportunities, talents, success, and choices. This is an easy and comfortable read to this point. Jay-Z’s initial success comes because he is both rhymester and a wordsmith, according to the author.

Then the volume takes an odd turn in Chapter 7. Here the author morphs from a straightforward storyteller into an investigative reporter. He spends the entire chapter trying to prove there is a financial arrangement between our protagonist (Jay-Z was unwilling to be interviewed for the book) and the manufacturer of his now favorite champagne, Armand de Brignac. Is there or isn’t there a financial connection? Why is this even important? Apparently to answer the earlier question of ”Who is Jay-Z?”

The eventual conclusion our author draws from what is—and isn’t—said in numerous interviews is that Jay-Z does, or must, have a financial arrangement that benefits him. The chapter ends with, “if he’s not getting a cut, or if he doesn’t own a piece, then he’s not a good business man,” adds Fass. “And we all know Jay-Z is a good businessman.” This might have been an interesting way to begin the book: establishing Jay-Z’s all-encompassing focus on the money. However, at this point in the book it is an unfortunate 22-page distraction.

Jay-Z has taken the opportunities handed him and done quite well, thank you very much. Yet we still don’t know: Is he just the nicest guy in the world, as his employees reiterate time and time again, or the most materialistic, almost ruthless, businessman, always focusing on “What’s in it for me?” You might start to draw your own conclusions from one point that pops up repeatedly throughout the book: that Jay-Z learns from a mentor, surpasses him or her, and then tosses them aside for the next one.

Back to the main question: Is he or isn’t he? We read that he shows sincere empathy for the little guy, he wants to learn, and he is easy to work with. And “what impressed [Russell] Simmons even more than Jay-Z’s ability to lighten the boardroom mood was his command of the situation at hand.”

Yet, “The same impulse that led him into that line of work—an unquenchable thirst for wealth and a flair for deal-making—drew Jay-Z into the business of basketball.”

“Through it all, Jay-Z maneuvered himself into a position to both bring NBA basketball to his hometown and squeeze every dollar he could out of the equation.”

“. . . and failing to take advantage of an option like that just doesn’t fit with Jay-Z’s ruthless business instincts.”

Jay-Z may be a masterful dealmaker, and he certainly has helped all things hip-hop rise in commercial success and social acceptance; however, does he really have the clout to influence the creation of governments? Apparently some think so. After establishing that Jay-Z is the rap master one interview comes out with the quote, “without hip-hop there is no Barack Obama” [Simmons].

Beyoncé Knowles is a superstar and former member of Destiny’s Child. She is also married to Jay-Z. They are, without a doubt, a true power couple. Chapter 8 delves into this chemistry and states that each has developed their own brand very well. In fact, media buyer Ryan Schinman is quoted as saying, “it’s a case of one plus one equals ten.” So why then, once he establishes Beyoncé is the Beyoncé, does the author feel compelled to use her last name again later in the book?

Mr. Greenburg is a respected writer for Forbes. Yet overall, this book is unfortunately uneven. It is interesting, but not entirely engaging. From the Introduction where the author seems to be in awe of the subject, to the first six chapters tracing Jay-Z’s history, followed by the oddly placed Chapter 7, the author seems to be searching for the right rhythm.