Empire of Secrets: British Intelligence, the Cold War, and the Twilight of Empire 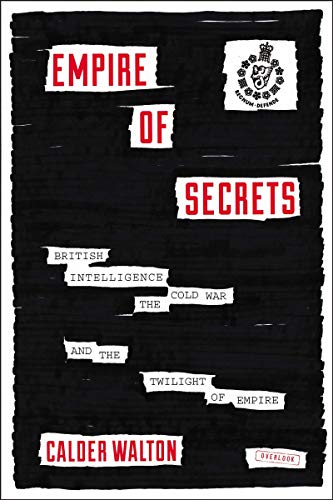 “. . . for those interested in the Cold War, intelligence history, and British decolonization, the book proves indispensible.”

“In April 1947 a female terrorist slipped into the main headquarters of the Colonial Office in London.” Her weapon was “twenty-four sticks of dynamite, wrapped in newspaper.” Her aim was “to use violence to force the British government into establishing an independent Jewish state in Palestine.”

As Calder Walton explains it in his new history of British Intelligence, the biggest threat to the United Kingdom wasn't the Soviet Union by Zionist terrorism. (Just to underline the point to avoid any misrepresentation, Walton uses the term “Zionist” to mean those loyal to the aims of Jewish nationalism.)

These and other stories come together in Walton's Empire of Secrets: British Intelligence, the Cold War, and the Twilight of Empire. Prior to achieving his doctorate in history and Empire of Secrets being an adaptation of his doctoral work, Walton worked as a researcher for esteemed intelligence historian Christopher Andrew.

Empire of Secrets came to fruition following the declassification of a tranche of intelligence documents held in Hanslope Park in the “curiously neutral-sounding: 'Her Majesty's Communications Centre.' To local inhabitants, however, it is known as 'spook central.'”

The history traces the history of the British intelligence community from 1945 to 1965, not because this period is bounded or special, but because that is the extent of the Hanslope Park documentation. Everything beyond is still classified.

Walton explores a series of colonial Emergencies, which is simply a euphemism for an intelligence failure. These Emergencies include Palestine, Malaya, Nigeria, India, and Egypt. Empire of Secrets functions as a historical corrective to the post-colonial mythology espoused by those who believe Britain's decolonization process was orderly and humane. History has treated the United Kingdom kindly, especially compared to the atrocities and disasters involved in French, Belgian, and Portuguese decolonization.

The result was the ironically calming recommendations to Her Majesty's Government. Walton illustrates this with examples from British Intelligence monitoring suspected Communists like Jomo Kenyatta and Kwame Nkrumah. While both flirted with Communist ideology, British Intelligence assessed that both held stronger beliefs in nationalism. During the inevitable hand-off, British Intelligence officials made sure to cover up their surveillance activities by destroying or fabricating files on the leaders.

In many cases, political pragmatism trumps ideological purity. Despite being the subject of surveillance, the newly minted leaders wished that British Intelligence would remain to advise them on security matters. Although the pragmatism has its dark side, since most leaders used the former British intelligence apparatus to create an oppressive regime and give them an unfair advantage over their political opponents.

The colonial Emergencies run the gamut in terms of military and moral consequences. Walton does an admirable untangling the confusion surrounding the Mau Mau movement in Nigeria. While described as an “us versus them” in the British, not without a hefty dollop of white racism, Walton explains that the Mau Mau movement was “an extraordinarily complex event, incapable of being reduced to simple or simplistic explanations.”

The carnage of Nigeria is contrasted against the comic idiocy of the Suez Crisis, a colonial Emergency so heroically mismanaged Mr. Walton compares it to the modern intelligence failure of President George W. Bush's Iraqi misadventures. His coverage of the British Mandate in Palestine offers a succinct explanation of a complex and volatile era of Israeli history. He retells the violent birth of Israel with nuance and understanding.

While Empire of Secrets is written in a highly academic tone, for those interested in the Cold War, intelligence history, and British decolonization, the book proves indispensible. It tells the story of Britain—empire on the wane, under the shadow of the United States—working desperately to keep its colonies, both as a matter of national pride and as an anticommunist crusade. But, as they say in weight loss commercials, results may vary.