The Empathy Diaries: A Memoir 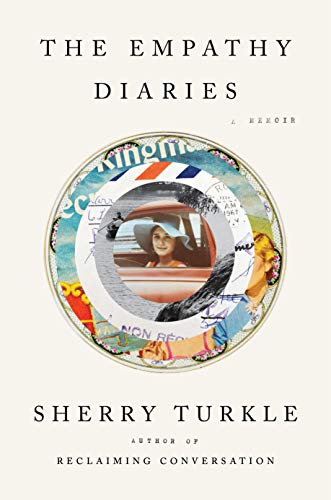 “The Empathy Diaries should be required reading for men who care about the emotional landscape of women and the health of their own feminine side.”

“People are not objects.”
—Sherry Turkle

As the title announces, this is a book about empathy—our need for it and, by implication, the lack of it in our society. Empathy is the ability to feel what another person is feeling, to put yourself in their shoes and be compassionate. Empathy is a feminine quality, and everything about this book speaks femininity: the off-white dust jacket with its circles of memorabilia, as from a girl’s diary or scrapbook; the lovely hardcover, cream-colored, trimmed in aqua marine, and embossed in gold with Sherry Turkle’s initials above an elegant ornament; the gallery of caring women inside. If a book could carry a scent, The Empathy Diaries would waft Chanel No. 5.

The memoir’s narrative follows the journey of a brilliant but socially awkward (nerdy?) Jewish girl as she navigates the complex dynamics of her lower middle-class origins in Brooklyn on her way to becoming an intellectual superstar. She is sustained on this journey primarily by her female relatives—her mother, her aunt, her grandmother—and girlfriends she meets along the way.

The men in this tale—her father, her stepfather, a reluctant boyfriend, her first husband—do not measure up to the women. They are presented as ineffectual, clueless about emotional imperatives, and either submissive or abusive in their marriages. Her grandfather redeems himself by doting on her and frequently coming to her rescue. That said, The Empathy Diaries should be required reading for men who care about the emotional landscape of women and the health of their own feminine side.

The memoir opens with Turkle’s search for her missing father, Charles Zimmerman. Zimmerman was removed from her life at age one when her mother peremptorily exited their marriage and made his name taboo in her household. At age 27, Turkle locates him with the help of a private detective and lunches with him and his current girlfriend at their apartment. As she recounts his behavior at the luncheon, we are led to the conclusion that Charlie Zimmerman is a man grievously lacking in empathy, a soul separated from both heart and mind by his coldly scientific approach to life. But another explanation suggests itself to the reader: Charlie falls somewhere along the spectrum of functioning autism, and is a man himself in need of empathy. Turkle returns to Charlie Zimmerman and his significance later in the memoir, as she charts her career path.

Her story proceeds along two interwoven threads: her struggle to resolve her identity, fractured by the loss of her father and her father’s name, which is replaced by the name of a stepfather she is unable to love, and her evolution as an academic interested in how social forces operating through computer technology shape both the human mind and human interactions. These two threads eventually fuse when she marries a famed MIT computer science professor old enough to be her father.

The first third of the memoir is taken up with her family life, dominated by her ambitious, manipulative mother, Harriet. Harriet is upwardly striving, and determined to use her daughter Sherry as the vehicle for the family’s ascent from its lower middle-class status. She has a secret agenda that she covertly enlists other members of the family to further without seeking their assent. Thus her second husband Milton is steered to adopt Sherry and bestow his name upon her while Harriet circulates the fiction that he is her biological father. Sherry is expected to cooperate in the maintenance of this lie, which rather stretches the boundaries of her empathy.

This ethic of empathy that allows Turkle to forgive her mother and love her requires her to recognize and accept her mother’s needs and vulnerabilities without judgement. It places Turkle in the role of psychoanalyst: the non-judgmental observer. This ethic will also guide Turkle’s work as an observer of the ways in which computers are changing the people who use them and the society that has come to depend upon them for its daily functioning.

As Turkle moves into her career as a professor at MIT, she falls in love with Seymour Papert, a scientist experimenting with the interaction of children and computers, an area of study that coincides with her interests. Despite their age difference and his history of promiscuity, she accepts his marriage proposal. The man she marries—brilliant, seductive, secretive—turns out to be another version of the father who abandoned her. Like Charlie Zimmerman, he is focused obsessively on his scientific interests, to the neglect of his human relationships. He is thoughtless, forgetful, and impulsive, often leaving unannounced at the last minute for business trips to foreign countries instead of coming home to dinner. On one of these trips, an extended stay in Paris for a consulting position with the French government, he takes a lover who moves into his apartment. Sherry learns of this arrangement during a visit to Paris when Papert brings her to a hotel instead of his apartment, offering the explanation that the sight of his lover’s personal belongings in his apartment might upset his wife.

It is during the crisis in her marriage that Turkle attempts to make contact with her missing father. The narrative returns to her visit with him, during which the reader learns more details of Zimmerman’s scientific interest in his young daughter. He performed experiments in deprivation on her—isolating her for hours in their apartment and ignoring her cries for contact with him. Harriet came home unexpectedly in the midst of one of these experiments to find her infant daughter in great distress. It was this discovery that provoked her departure from her marriage to Zimmerman and her determination to erase all memory of him from Sherry.

Papert had accompanied Turkle to New York for this reunion with her father. He was to stand by in case she wanted him to join the meeting. After hearing the details of Zimmerman’s “scientific experiments,” she summoned Seymour to the meeting. The two men sat on the couch discussing Zimmerman’s self-published book about the flaws in Einstein’s theory of relativity. As Turkle observed them, she realized she had married her father. And she realized that her mother had rescued her from a monster.

These life experiences, and the conclusions Turkle drew from them, greatly influenced her thinking about the role of computers in society. Computers are mechanical forms of intelligence. They can store, sort, and process information. They can communicate with their human users, and can facilitate communication between humans. But they are not capable of empathy, although attempts have been made to make computers appear empathic. (Think HAL in Kubrick’s 2001: A Space Odyssey.) Charlie Zimmerman was the human prototype of a computer, a man whose interest in science had removed from him any capacity for deeply felt human interaction. Papert, obsessed with his theories, indulging himself at the expense of others, was another computerized human being.

The lesson that Turkle takes from her experience as the daughter of Charlie Zimmerman, the wife of Seymour Papert, and a lone female faculty member in her department at the Massachusetts Institute of Technology, is that technology, and the scientific mind that drives it, ends up objectifying and commodifying human beings because empathy is excluded from “the program.” A well-designed machine is “perfect” (the goal of the scientific process is perfection, i.e. complete certainty), but humans are imperfect, vulnerable, and unpredictable.

It is just these qualities that, in Turkle’s view, make human beings capable of empathy. “Empathy requires vulnerability . . . and it’s our capacity to be vulnerable that makes us human.” Turkle warns us that our technology is commodifying us, separating us, and draining us of empathy. “The way we live now is an experiment in which we are the human subjects treated as objects by the technology we have created,” she writes. This insight flows directly from her lived experience as the object in her father’s child development experiments.

Turkle’s narrative is skillfully assembled, like pieces in a puzzle. She effectively blends the story of her growth in self-awareness with her professional realization that computers pose threats to the humans who have created them. Empathy is the human quality that makes self-awareness possible, and it is also the quality that can humanize the technology that rules our present era.