Emotional: How Feelings Shape Our Thinking 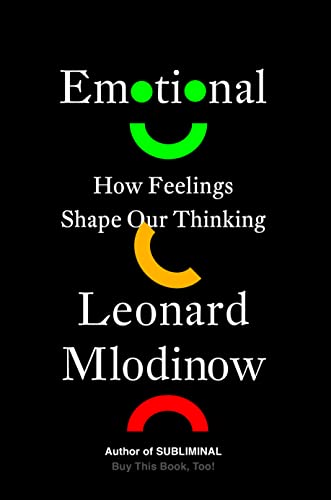 “It is not our circumstances that get us worked up, but the judgments we make about them.”

We have all heard that the mastery of reason is a key to one’s success. But feeling is equally important to survival and happiness. Our feeling self makes hundreds of daily decisions that are every bit as important—even crucial—to what the Greeks called eudaimonia, or “fortunate welfare,” as those weighed by rational thought.

Science and philosophy have known this for a long time, yet Leonard Mlodinow presents the dichotomy as if it were new in Emotional: How Feelings Shape Our Thinking.

Perhaps this is because Mlodinow is a theoretical physicist from UC Berkeley. He is also the author of 12 nonfiction books on assorted topics, which marks him as a synthesizer rather than an originalist. That is, he aggregates and expounds astutely on the research of others. He does not lack for material.

In fact, Mlodinow joins a growing list of academics from fields outside of neuroscience or philosophy who have grappled, with various success in the past decades, with the problem of consciousness and rational thinking. While not necessarily an obstacle, readers must stay mindful that his is a top-down approach that tackles the problem with a mindset quite different from those who enter the field through its basic framework and then gradually encounter its controversial frontiers from the bottom up.

Each camp may study the same facts, but their subjective interpretations and perspectives are bound to differ. The argument that thinking and feeling are separate and opposing forces goes back a long way. Plato said we are prisoners of our feelings and that we should therefore “hold fast to the sacred court of reason” lest we be lost. Aristotle, on the other hand, argued that emotions have a logic of their own and must be understood on their own terms. They weren’t simple animal passions unleashed, but a complex part of human thinking.

Mlodinow agrees, and explains the ways that emotions can help, why they sometimes hurt, and what we can always learn from both instances. By not seeing them as forces in constant opposition, one’s emotions can be assessed, regulated, and controlled (although understanding them is a lifelong undertaking).

He explores their role not only in humans but also in evolutionarily more primitive organisms like the fly, the scallop, and the starfish. Doing so, he attempts to understand why biological organisms evolved any capacity for emotion in the first place. Observing that fruit flies will drown themselves in his glass of wine he says, “even a lowly fruit fly brain does not need to be told what to do. It knows how to make choices that enable it to avoid predators, pursue mates, and comfort itself with alcohol when its overtures are rejected.”

Ascending upward toward us, Mlodinow shows how food companies have us hooked, delves into the ways that Facebook manipulates us, and suggests ways to counteract such exploitation. Emotion is famously contagious, too, as illustrated both by laughter rippling through an audience or fury roiling through an angry mob.

A long chapter at the end explores emotional regulation or how to manage one’s feelings. The three most effective approaches are acceptance, reappraisal, and expression. Showing that successful regulation has both physical and psychological benefits, he draws on scores of philosophers who warned against reacting emotionally to what is outside our control. That is, it is not our circumstances that get us worked up, but the judgments we make about them.

By way of practical application, he shares a personal example of leaving his mother either in a nursing home where she would surely die if she coded or placing her in the hospital where she would be tortured by all the indignities that modern medicine has to offer. If he can navigate such wrenching choices, so can the rest of us.

The last section of the book invites the reader to sketch their own emotional profile. That is, it shows how one responds in characteristic ways. Profiles include shame and guilt, anxiety, anger and aggression, happiness, love, and attachment. Readers will be intrigued, but Mlodinow also lays out why one may want to know this. Those who habitually react with anger or aggression, for example, are more likely than calm individuals to have an early heart attack.