Emerson and the Dream of America: Finding our Way to A New and Exceptional Age 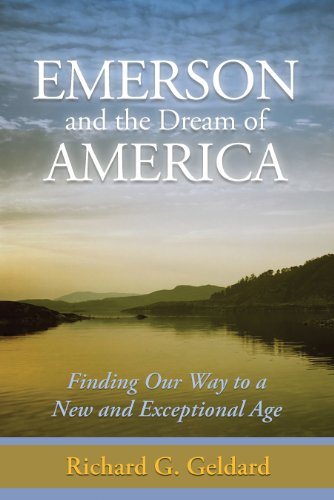 Richard Geldard is either wonderfully prescient or tragically late with his message in this thought-provoking book. The message is that Emerson, who challenged a young and Euro-centric America to seek its own national identify, its own soul, its own manifest destiny, is just the man we need to help us find our way again.

Geldard’s premise is that the American Dream and the Dream of America are two very different things, and that the former, with its emphasis on materialism, has made us forget the idealism of the latter. If he is right, he has put his finger on the failing pulse of a nation in decline, a nation already being written off by self-appointed soothsayers proclaiming that China for one, India for another, will eclipse America in the new millennium—and thus a big dose of Emerson is just what the doctor ordered. If Geldard is wrong, then a refresher course in Emerson, that quintessential American, is long overdue anyhow.

Though an ordained minister, Emerson was less a preacher than a philosopher. In fact, his address to the Harvard Divinity School in 1838 was deemed by his orthodox audience as so irreligious that he wasn’t invited back for 30 years. But in that 30 years, Emerson’s reputation as an orator and Thinker with a capital T soared to Olympian heights. And it’s still there today, 172 years after his death at age 79. There must be good reason for that rarefied esteem, and Geldard spells it out in the best exposition of Emerson’s thought that this reviewer has seen, and Emerson is not the easiest of Thinkers to understand, let alone explain.

Simply put: Emerson understood America better than anybody before him—and, so Geldard believes, understood it far better than we as a people do today. Emerson saw America not as some Darwinian scramble for the Main Chance, which is exactly the way many Americans do see it, but as something wholly new: the only country on earth with freedom as its raison d’être and individualism as the natural expression of that freedom.

But that was then and this is now. How, one might ask, could a nineteenth century concept of man’s place in the scheme of things help us today? Emerson lived in an agrarian society of about 23 million people; today we’re an urban society of more than 300 million. In truth, we now live in a world that Emerson could not have imagined.

But Geldard believes that Emerson remains not only relevant but vital to the future of America, especially now that Barack Obama is president. To Geldard, Obama’s election signaled an end to the long winter of our national distemper and a rebirth of the idealism that made both Emerson and America great. We now have a chance, Geldard believes, to regain our credibility among nations and to retake the moral high ground.

No doubt, such a notion would curdle the cream of, say, a modern Tea Partier, and might even bring wistful smiles to those who would if they could wish it true tomorrow. But every good idea has its detractors. Indeed, if the idea is good enough, opposition merely gives it traction, and we as a nation could not help but benefit from revisiting Emerson.

True, some of us in these cynical times might need breathing apparatuses to make the labored climb to Emersonian heights, but, what a view when you get there! In fact, Geldard, who obviously has made the climb often, put it well: “We need a point of observation, that higher platform above the floods of experience.” And with Emerson as your guide, higher is just where you go. What reader could forget the awe with which he first read the great man? And if you still haven’t gotten around to it, begin before sundown today with one of his seminal works, for instance that great essay “Self-Reliance.” You’ll be glad you did.

It’s not Geldard’s intention, perish the thought, to depict Emerson as some flag-waving patriot. What Geldard wants the reader to see is that Emerson’s exceptional high-mindedness is synonymous with the spirit found in the Declaration of Independence and the Bill of Rights, and is identical to that intuitive presumptuousness with which the Founding Fathers could declare “truths” that they held to be “self-evident.”

That’s Emerson up and down, and his was indeed a transcendent wisdom, for in the idea of freedom and individualism he urged us to see a one-ness in the universe, a connectivity in all things. Say to yourself “I am my neighbor and he is I—literally, not metaphorically—and we’re all in this thing together,” and you’ll be on the right track with Emerson. And if you still need help on this mystical idea, open up Leaves of Grass, by that most American of poets Walt Whitman, who was Emerson’s soul mate. Indeed, the two men together form the beating heart of a latter-day Platonic idealism that Geldard sees as reborn in the election of Barack Obama.

It’s possible, of course, that to modern readers Emerson is (gasp!) passé. If so, more’s the pity, for Geldard, IMHO, is right: Emersonian idealism could refill the sails of our drifting Ship of State and it is tailor-made to rekindle the passions of the socially conscious generation of the 1960s and 1970s (provided they can remember where they dropped their banners and are not too arthritic to pick them up).

But even if none of this comes to pass, if it’s all pie-in-the-sky idealism, Geldard’s book is well worth the reading, for it’s virtually impossible to come away from a visit with Emerson without feeling spiritually enriched. In his more mystical reaches, Emerson can be difficult to understand, so take along this book. Geldard’s knowledge—and understanding—of Emerson is second to none, including the inimitable Harold Bloom.

Go also with these sobering words of Emerson as your mantra: “I am here to be worked upon.” You’ll feel better in no time.