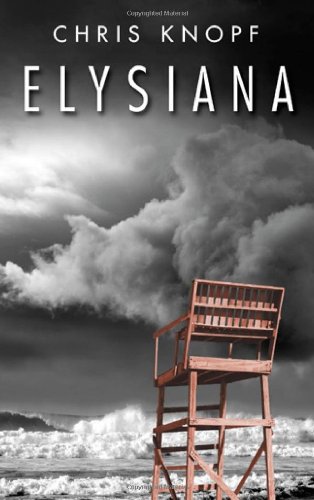 Welcome to Elysiana, New Jersey, circa 1969—an island, physically and metaphorically, off the coast of New Jersey. In Christopher Knopf’s Elysiana, the fictional island of the same name is physically separated from the mainland by an unnaturally long causeway and a near-perpetual haze. Elysiana’s population is metaphorically removed from the mainland by a causeway of eccentricities and a haze of hashish smoke.

On the island are a collection quirky people with difficult past lives, and more than a few hippie wisemen (or ne’er-do-wells, depending your understanding of the free-wheeling 1960s). It appears that there are only three activities on Elysiana: surfing, smoking hash, and plotting coups against the local government. Recent émigrés—a strung-out woman escaping a sexually abusive father, an assassin with mysterious familial connections on the island—are similarly complex, unlike the boorish tourists (derisively called “shoopies”) who come and go from the island without notice. Elysiana will remind readers of the New England villages of John Irving’s novels and Cicely, Alaska, from the television show, “Northern Exposure.”

This is a particularly satisfying setting for an eccentric thriller. Elysiana has its share drug-dealers and hit-men, but the only real evil on the island is perpetrated by the Machiavellian borough president—Norm Harlan—who tortures criminals, plots bodily harm on the island’s mayor, and seeks to subvert the island’s governing charter. Harlan does all of this to settle an old score with head life guard, Avery Volpe, and to erase an ancient glitch in the town charter granting primacy on the beach to Volpe’s beach patrol, rather than Harlan’s police. If this all seems a bit convoluted, well, it is, and this only explains one of the book’s half dozen plot lines.

Others are a simmering romance between Gwendolyn, the island’s resident hippie, and Jack, a survivor of a multi-year coma now living as a hermit in an abandoned hotel; there’s also a love triangle between Volpe, his Harvard-educated young lifeguard, Ditzler, and Sylvia, a beautiful woman ten years younger than the former, and ten year older than the latter. Knopf delights in weaving his characters and plot lines together. There are zero degrees of separation on Elysiana; everything is interconnected, deliciously so.

Knopf is particularly adept with droll descriptors. For example, the black interior of a car on a summer day is described as a “Bessemer furnace,” a woman's puffy hairdo is described as “Shangri-La,” and the first rumors of a giant party is cunningly introduced this way: “As with any natural catastrophe, the build-up began almost imperceptibly.”

Elysiana is a very satisfying book, with one substantive flaw. Elysiana’s women characters fall too neatly into damsel-in-distress and bimbo stereotypes. The two most prominent women in the book, Gwendolyn and Sylvia, are both damsels in distress. Gwendolyn saved from sleep in the sand dunes by Jack; Sylvia (whose firm midriff is mentioned three times) has her life saved numerous times by her knight errant, Ditzler.

Disappointingly, the only thing that Sylvia does to thank Ditzler is provide oral sex. The two other significant women characters are dim-witted and incompetent: Paula (an indifferent wife and terrible mother) and Patrice (always stoned).

Though damsels-in-distress and bimbos have been staples in thrillers, their continued survival in 2010 is cliché at best, sexist at worst. Even in thrillers, we now expect women characters to be strong, ambitious, and clever (and also ignorant, vain-glorious, and pig-headed). The assets of the women characters in Elysiana begin (and sometimes end) with their shapely figures.

Elysiana defies easy categorization. The ensemble cast, wry observations, and lack of a formulaic ending that ties up every loose end, favorably distinguishes Elysiana from garden-variety thrillers, but the novel is too plot-centric to be considered true literary fiction.

Perhaps, Elysiana is most like the comic-epics Confederacy of Dunces (John Kennedy Toole) and Lord of the Barnyard (Tristan Egolf), but while those books are grand monuments to human folly, Elysiana is a modest sand-castle tribute to the free-spirited slackers of the Jersey shore.

Even with some bumps, Elysiana is a clever and interesting novel, as endearing as the island.